It is amazing how much stuff it takes to race cyclocross. That is the reason I bought the diesel van, for the space. I wish it was an extended version, or even better, a Sprinter van. There are only 2 of us racing and the van is pretty full, not completely stuffed , but full.

There are 6 bikes, 3 of mine, plus 2 of Catherine’s, plus Trudi’s. I don’t know how many extra wheels. A least 2 pairs of road wheels, plus 3 sets of extra cross wheels, so I guess that is 10 extra wheels. I have an extra plastic container with parts, plus another bag full of extra cross tires. Plus all the clothing, which is unreal. It would be nearly impossible to fly to a race at this point.

I’m doing 3 races in the next week. I think it’s going to be important trying not to get to wasted hanging around too much wet and cold. This afternoon, it looks like it is going to be a slippery affair. We were following the race yesterday on our phones and it was blizzard conditions when it was happening. Then, upon arriving in Chicago, there isn’t any snow at all on the ground. Weird. But, it did snow enough that it is going to have to be wet there for sure.

I rode the trainer in Trudi’s mom’s garage for 30 minutes late last night. I haven’t ridden a trainer in maybe 2 years. I think that trainers are very bad for your bikes. Clamping your stays into something solid and mashing your pedals isn’t something that could possibly be beneficial for the longevity of a frame. It put a ton of stress in areas that aren’t necessary made for that stress. That being said, I have ti frames and I think they are nearly indestructible, so that isn’t a good reason not to use a trainer. But if you’re riding a carbon frame, that is a completely different issue. Trainers are bad for carbon. But, that isn’t the reason I don’t like them. I don’t like them because of the manotony. And the sweat production. The garage was pretty cold, so I didn’t sweat took much, which was nice.

We unloaded most of our extra stuff into the garage and are coming back here after the race to get it. Then we’re driving up to Delavan Wisconsin, and stay at Trudi’s mom’s condo for a day before heading over to Madison, which is an hour from there. It’s pretty convenient, but still a lot of moving stuff around.

The house where Trudi grew up, and where he mom lives, is super small by today’s standards. It has 3 bedrooms, 1 bath and a single car garage. The bedrooms are small enough that if you put in a king size bed, there isn’t much room left for anything else. But, 6 people lived there growing up and it seemed normal. I brought enough stuff in my van that I could easily fill the garage. It is truly amazing how things have changed in just 1/2 a life time. Everyone wants so much room and so much space. I’m not sure where our priorities changed, but sometimes I wish everyone would just go back to the basics.

Well, anyway, I have to get moving. I’m at a Starbucks across the street. I’m going to go back and ride the trainer, once again, for a bit and then eat a big meal and head over to the course. I don’t have high aspirations for the race. But, it’s going to be good for the long run. I’m sure I’ll have a bunch of good stories. 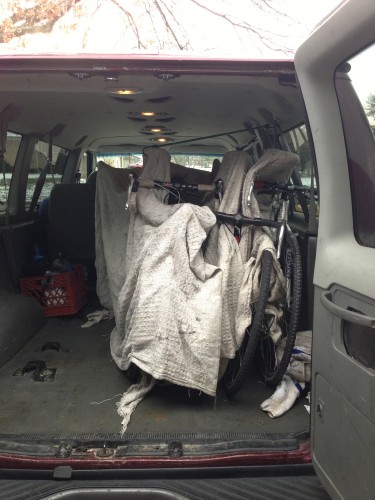 This is 6 bikes, with wheels. The blankets I put between the bikes, I got at a spa, next to the hotel at Cross Natz in Napa. Trudi asked for a blanket, so I wouldn’t mess up the rental car and she came back with a stack of blankets that were oil covered and not usable anymore. That was over a decade ago. 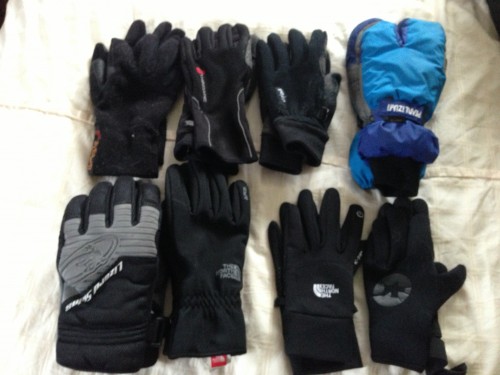 I have 8 pairs of gloves with me. 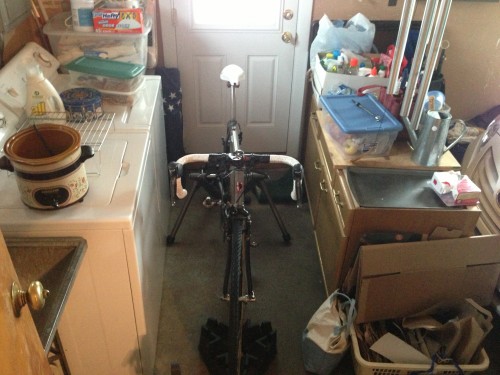 There isn’t much extra space in the garage for riding a trainer. 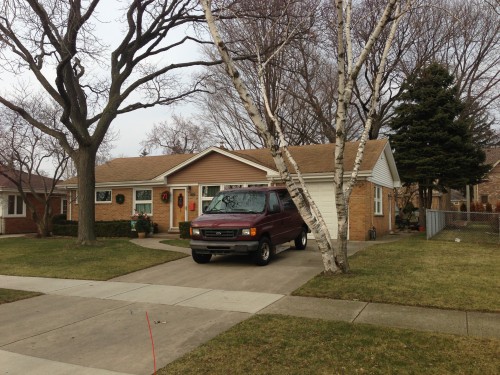 Trudi’s mom’s house. It’s about all you really need for a home. Well, a basement would be nice. Look at all the snow here! 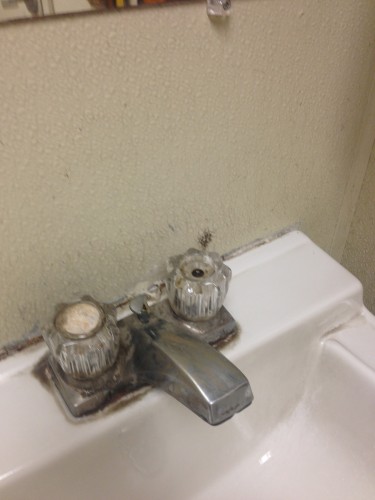 This is at a fuel stop in Iowa on the way up. This is the normal gas station faucet handle. I think there is probably a place that sells them new looking like this just for gas stations. It would cut down on water usage because no one wants to touch them.