What I like most about watching the Belgian crosses on the internet is appreciating that there is virtually no indecision ever by any of the leaders. Indecision in cyclocross costs you time. They’ve all raced so, so many cross races that they innately know how to go the fastest under ever changing conditions.

I’m pretty good with this, I have to admit. I’m a little under raced, mildly rusty, so my decisions might be a tad slow. But, under normal circumstances, I think I have the ability to ride fast in most conditions in cross. I’m not too good on sand, but sometimes I surprise myself.

Monday’s race in Kansas City was slick and tight. I’m a little sick, ear ache, headaches, etc., but am surprised that it hasn’t gotten any worse, which is a very good sign. So, the course being less fitness, and more skill related ability, suited me fine. I was so bummed I couldn’t race on Sunday after hearing the course was slick with a fine layer of mud. Monday, there was the same mud, but covered by a couple inches of new snow.

I can’t really complain about my race. I rode pretty well for all but a few costly corners. I got a good start and got into the lead after a couple turns. I slowly got up to about 10 seconds ahead of a trio of friends, good cross riders, Joseph Schmalz, Shadd Smith and Aaron Elwell. And that is how it stayed most of the race. I rode pretty flawless the first 40 minutes. Aaron rode up to me after 3 or 4 laps, but got gassed and dropped back to Shadd and Joseph. Finally, with a couple laps to go, I got up to 15 or 20 seconds ahead.

But, I was having a terrible time getting my feet back into the pedals after dismounting. It is only the second time I can remember that I’ve had any issue with Shimano SPD pedals. Sometimes on the pavement, after the barriers, it would take me a couple hundred meters to clip in. I know the guys riding Crankbrothers pedals were having some problems, but nothing like I was. It rattled me.

Joseph made a big effort to shell those guys and try to bridge up to me with two laps to go. I made a very costly mistake sliding out on a corner before a short climb. I knew I wouldn’t be able to clip back in, so I ran the hill. Joseph made up a ton of time on me here. So, with a lap and a half to go, we were together. I was okay with that, the 2nd half of the course, before the finish, suited me better. But, I never got there. Joseph gapped me, riding away on the concrete. I came back on early, but slid out again and finally fell doing a U-turn on the pavement. I pulled the plug there. Shadd and Aaron raced to the line, with Shadd nipping Aaron in the end.

I think it would be so cool if I could get everyone’s take on what they did wrong, or right, during this race. I only fell once, but it was at the completely wrong time. I know that Shadd and Aaron each fell at least once. Joseph, maybe twice, but I’m not sure.

My issue for not winning wasn’t a lack of ability. The fitness part didn’t come so much into play. I started getting frustrated by not being able to get my shoes attached to the pedals. I never had that big of a lead, so I didn’t think that I had much time to clean the bottom of my shoes after each dismount. That was a mistake. So, I tried to go faster through the corners and started making other mistakes. Each time I slid out, I’d plant my inside foot on the ground and it would get clogged full of icy mud, so I’d lose more time.

I’m sure that Joseph, Shadd and Aaron all have their own thoughts on why they went fast or not. I’m normally a lot better in those conditions than I was on Monday. But, I’m super stoked that I got to race a slick race so close to Madison Nationals. I can’t image that it is not going to be a technical affair up in Wisconsin next week. Last report I heard was that there was 22 inches of snow in Verona and they had plowed the whole course, but were having issues with blowing snow.

It is bad weather here in Kansas now. High’s under 20 yesterday and slushy roads. I rode inside. I’m trying to decide whether to race a local race here in Kansas on Saturday, and then head up to Madison, or go up to Chicago and race the UCI race on Sunday and just stay. There are only 25 guys registered in Chicago as of now. I was hoping for a much bigger field. 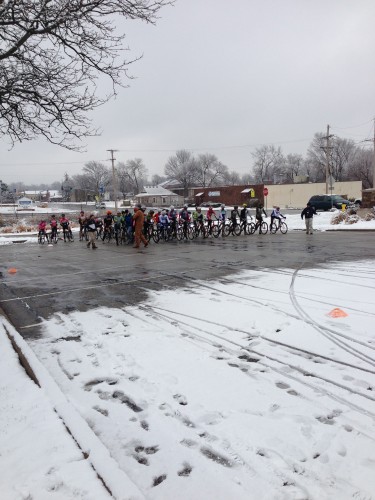 We don’t do any stinkin’ 8 across here in Kansas. Nearly everyone gets a front row start. 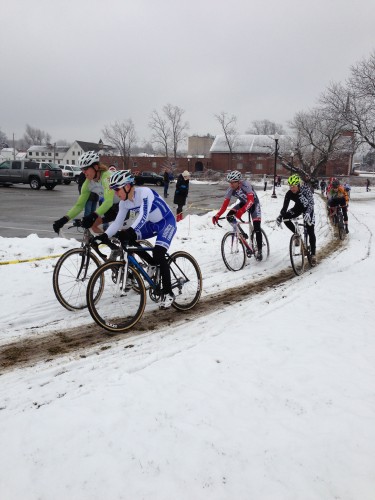 Joseph got the hole shot, but I passed him after a couple corners. Shadd and Aaron are 3rd and 4th. 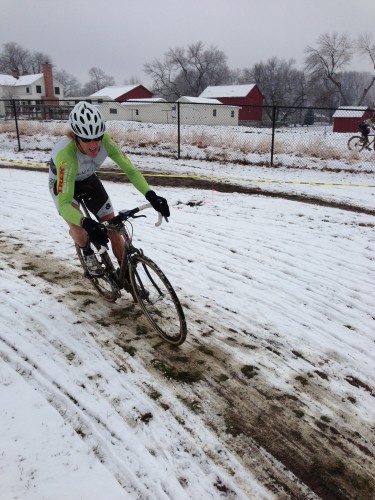 I was riding a Dugast Rhino in the rear and FMB with Michelin Mud 2 tread in the front. They were hooking up pretty good. 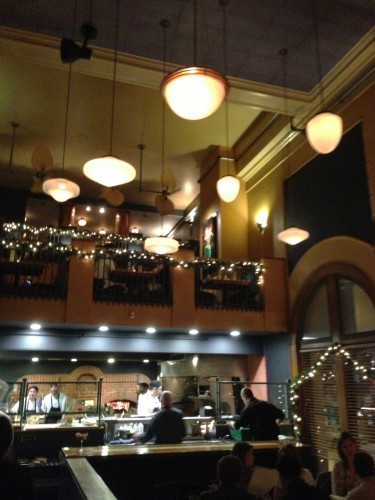 We spent New Years Eve at Tellers in Lawrence. It’s good food in an old bank building in downtown. There were 14 of us at dinner. 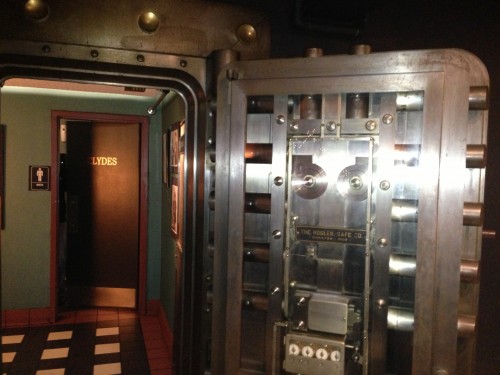 The bathrooms at Tellers are in the old vault.

5 thoughts on “Cross Off the Old Year Cyclocross”