I’ve been following most of the Belgian cycloc-x races that have been shown live this season. More and more of the smaller races can be seen live via the internet. After watching most that have been shown this season, I realize that the front guys aren’t really racing most of the day. It’s not like they are necessarily sand bagging, it’s that they aren’t “trying” 100 percent the whole day.

Yesterday, watching the Druivencross Cyclocross at Overijse, Sven Nys just got an okay start. At the start of this races, no one is really going nuts and fighting for their positions. They know they have to do it day after day, and it doesn’t do any good to make any enemies in such a small group. Anyway, Sven was kind of split off the front group the first couple laps. He finally did his normal thing and bridged up to the front 3 in about 1/2 a lap. Just then, he got to the pit and went in and changed his bike. He came out of the pit back in 8th or so, well behind once again. I was thinking, why would he do that when none of the others he was riding with didn’t pit. The only answer was that he was riding well within himself and knew the guys at the front weren’t going to go full throttle at that time in the race. He’s done 100’s of start money cross races and knows how it works better than anyone.

I don’t blame them. I do understand that this is their livelihood and that the amount of racing that they do in a season would kill a person if they went full tilt the whole season. But, after watching them, it sort of looks like the post Tour criteriums where the results are decided before the start. I assume that isn’t the case, but it is definitely not like racing here in the States, where the riders race full on for their results each time they clip in. The Belgian races do get going fast the last couple laps.

I read an article last week somewhere where Sven Nys was urging all the other riders that they needed to honor their contracts with the races and not be skipping events to rest up for other races that maybe are more important to them. He said it didn’t really matter to him so much, because he is planning on retiring soon, but to keep the sport healthy, each rider needs to go to each race. The circus isn’t circus if some of the performers fail to show.

He used Niels Albert as an example last season, where Niels got hurt and had to sit out a month, so was much fresher by the time the Worlds came around, thus smeared them. I do understand his concern.

There really are only about 15 Belgian cyclo-x pros. Plus, a handful of riders of other countries that make some start money. So, when guys start missing events and focusing on specific races, then the whole thing falls apart. They all can’t be racing full out, weekend after weekend, in mucky and sandy messes, as it is so often in Belgium. They are truly racing for the start money.

The start money at these events are pretty substantial. I don’t have any personal knowledge of what each guy gets, but back in 2008, Sven was asking for €8000. I’m sure that Niels and him are getting quite a bit more than that nowadays. So, when you multiply that by the dozens of races that these guys do a year, it a big number. Plus, the prize money. Yesterday, Sven won €12500 for winning. I’m sure that is one of the big paydays. But, compare Svens €20000+ day to that our guys that were racing for a total prize list at the C1 USGP race in Bend yesterday of $8494 and $2013 on Saturday. It is completely a different deal.

Anyway, it is interesting. It seems like they race much harder at the World Cups, which is nice. Plus, it is no holds barred at the Worlds. That white jersey with rainbow stripes is worth a ton of €’s for those guys, so it is the race to win each and every season.

As I wrote yesterday, the sport is very, very hard. These are very tough bike racers, even if they aren’t going 100% each and every race. It is lucky they can drive their motor homes just a couple hours for most of the races. The coast to coast travel that we do here in the United States is insane compared to short distances in Europe. Hopefully by the time Louisville Worlds roll around, the Belgian guys will be all equally tired from racing, thus giving our guys a better chance for good results. 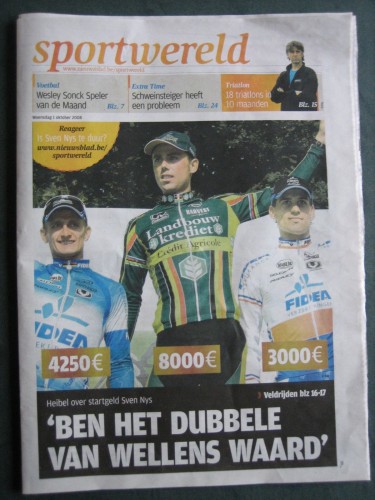 From an October 2008 Belgian newspaper. The article was about how according to a promoter, Sven wasn’t worth his €8000 start money. 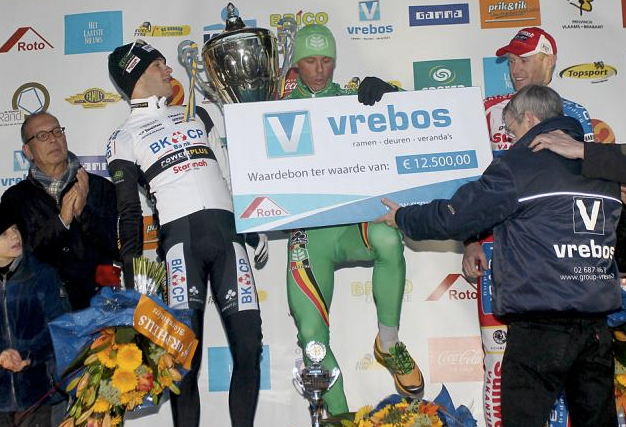 A big trophy and big paycheck for winning the Druivencross Sunday