All I can say is wow. Wow, that is a very hard sport. Wow, am I out of shape for that intensity. Wow, does my back hate me more than it ever has?

I haven’t clipped in for a race in about 5 weeks. Plus, it was a long mountain bike race at that, nothing like an hour long cross race. I did two 5 minute efforts last week, but knew that wasn’t going to take the sting off a cross race.

Like I wrote yesterday, the local guys around here have been racing pretty consistently and well this whole season. I’m actually ranked 3rd in the state of Kansas at USAC rankings now, all the results from last season.

I did warmup pretty well. I rode over to the course and did a lap this morning. Then, about an hour before the race, on the way riding back to the course, I stopped at a park that is right by my house and did 3 hill sprints running. They went badly, so I wasn’t too motivated about my chances.

But, even though I didn’t have high hopes, I tried hard the whole day. I can’t give myself a passing grade on fitness. It’s not like I’m lacking fitness, it is more like I can’t access it. I’ve had this issue with my left leg on and off for a long time. It used to only be the back, hamstring, but somehow it seems to have migrated to the front. It is like it is just dead. When it doesn’t work, I have no power sitting on my seat, which is pretty important in cross.

I got sort of a bad start. The course was all riding. It was technical, with tons of u turns around trees, but there really wasn’t any place to rest at all. My team mate, Brian Jensen, got the hole shot, but after just a few turns, Shadd Smith, KCCX, passed him.

I was pretty within myself at that point, since most of the race had been turning around corners. When it got over to the hill is when I started having trouble. Brian let me go by and I rode up to Shadd. I had nothing when he got off his seat and climbed the hill. I’d ride back up to him when on the corners, but he kept gapping me continuously.

That isn’t a good thing, less than 15 minutes into a hour race. Pretty soon, Shadd was close to 20 seconds ahead of me and I was flailing. Andrew Coe, who was in 3rd, was just hanging about 10 seconds behind me. At the time, wasn’t too worried about the guys behind me because I didn’t think there was a chance I could ride around the course much slower. But, Andrew has a tendency to go faster the last half of a race, so I kept an eye on him.

Anyway, flash forward to about 3 laps to go. Shadd must of screwed up somewhere, because I made up some time on him. Pretty soon, I was less than 15 seconds behind and feeling a bit better. So, I thought that I should put in an effort to try to win. Since I couldn’t produce any power sitting, I just put it in a big gear and rode off my seat on the long stretches. I’d take a ton of time, by that I mean, a few seconds, out of him, only to make a silly mistake and lose it. I got within 5-7 seconds of him a couple times in the last two laps, but then would screw up. It was probably because I was riding so far over my head, I wasn’t cognizant of what was coming up. For sure I would have caught him if I would have ridden clean. But, I’m sure Shadd was making mistakes of his own too.

So, I got within 5 seconds and then realized it wasn’t going to be. After I crossed the line I rode up to Shadd and apologized for making him ride so hard the last few laps. I hate it when a guy does that to me at the end of the race. Especially a race for a championship. But, I thought that just maybe I would come around and get going, but it never happened.

2nd was better than I had anticipated, so I guess I have to be happy with it. I’m not happy with how I felt after the race. I hit my knee on the bars when I pulled my foot out of my pedal and have a huge bruise about my knee. And I don’t bruise. Plus, my lungs were toast, once again. The temperature was in the mid 40’s, but super damp, so it made it seem a lot colder.

I’m still considering driving over to Jefferson City for the Missouri State Championships at 2 pm this afternoon. It is over 200 miles away, but I should race some more. Sometimes, things turn around on a dime in sports. At least that is what I’m hoping for. 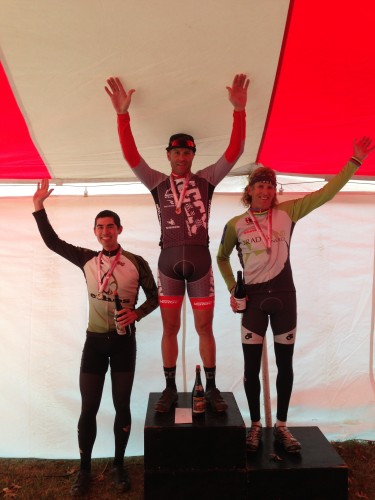 Andrew, Shadd and I. 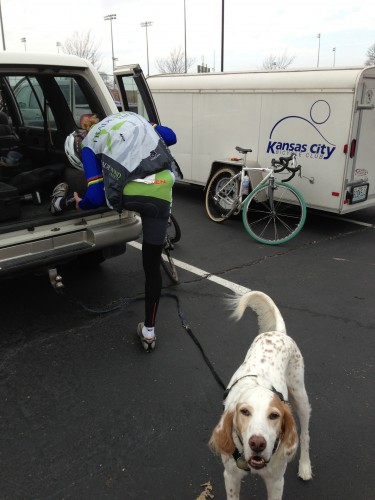 Trying to stretch out my left hamstring before the start. Bromont wasn’t interested in me at all obviously. 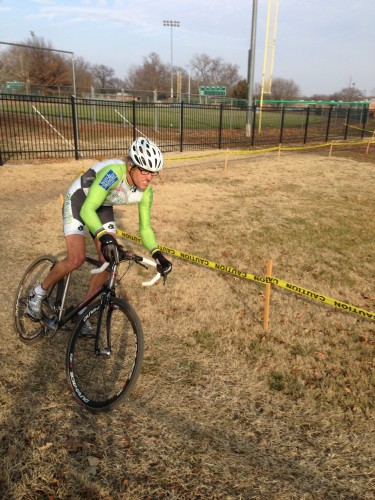 I felt like a spider on a bike, nothing was going where it was supposed to. 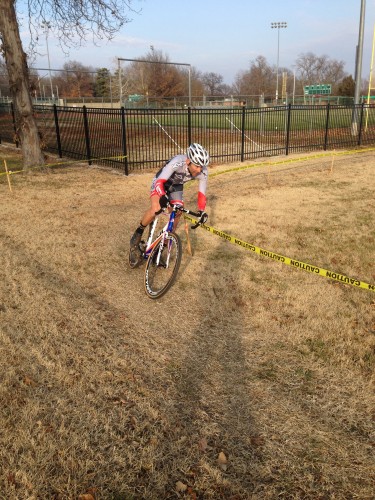 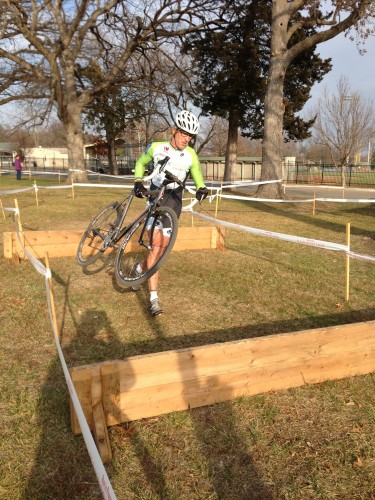 I was planning to hop the barriers after watching Nys and Co. in the morning making it look so easy, but there was a tight corner before that made that unrealistic. 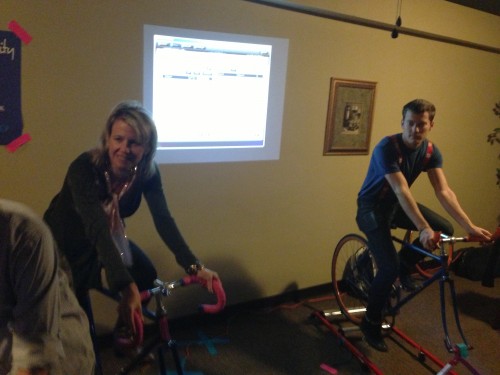 We went to an after race party in downtown. This is Catherine about ready to do a roller race. She won the Kansas State title for women earlier. 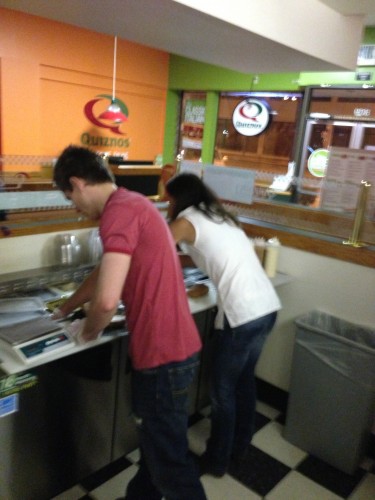 Then, after the party, we went about a 1/2 block away and made sandwiches at Quiznos. Eric, a guy we ride with owns it, so he obviously has the key. How many chances do you normally get to do this? Not that many. This is Eric and Trudi making some sandwiches.