I’ve never been too obsessive about position on a bike. I’ve had my position down for a long time and just tweek it a bit every once in a while as times change. It has to be this way because I switch between so many bikes on a weekly basis. Nowadays, I could be riding up to 4 different bikes in a week, with two cross bikes, a road bike and then a MTB bike. Historically, I can switch between them without a blink.

But recently, for some reason, my bikes don’t feel like they fit me correctly and I’ve been changing position nearly on a daily basis. I’m not doing a ton of adjustment, just a little. And it doesn’t seem to be helping. Yesterday, I moved my seat on the cross bike I’ve been riding forward a couple millimeters. It felt better, but the key is if it is better.

Like I stated originally, I honestly think exact saddle position and reach is not something that you need to go crazy over. I believe that there is enough fudge factor in your position that you have by movement forward and backward on your seat, that you’ll find the sweet spot for each condition naturally. I know a lot of you aren’t going to agree with me on that, but I’ve experienced enough to realize it is a fact.

I remember when I was riding for the Levis Team, Roy Knickman would come back from Europe every year, early in the Spring after getting his position set on his bikes. He’d then proceed to tell me I needed to chance my position. I would just give him carte blanche to do whatever he wanted to do. He’d raise my seat .5 centimeters, then shorten my stem the same. Whatever, I’d just get on the bike and race it. It was all good. Then, the next season, he’d do the same thing all over again.

A couple times in my career, I’ve had to make bike changes to bikes with completely different setups. Two times come to mind. First, is the Road World Championships in 1985. I broke a chain and got on a bike of a team mate, Tony Palmer, who road his saddle 5 or 6 centimeters higher than mine. It was so bad for the first 30 minutes, but eventually I got used to it. I had more problem getting used to my seat position, once I got my bike back an hour later. I initially thought that the mechanics had lowered my seat.

The second time was in Philidelphia at the US Pro Road Championships. I was riding an aluminum frame and it cracked on the down tube about 30 miles into a 156 mile road. I was there on my own, so had to use a Mavic support bike. They only had a 53 centimeter frame, with a MTB seatpost and a quick release. I got the seat adjusted right pretty quickly, but the reach was beyond short. Every time I stood for the first hour, I would wack my knees into the handlebars. Eventually after 5 more hours, the bike felt like it was mine. I finished in the field and sprinted pretty good.

I’ve been riding my seat at 81 centimeters (center of the bottom bracket to the top of the seat) for over 30 years. That is pretty much the only number I know on my position. I’m not sure how I got that number, but that is the number. I sometime have it a smidgen lower on my cross bikes, depending on the conditions. By that, a couple millimeters.

All this being said, I think that the feet position on the pedals is super important. Bad cleat adjustment can be the cause of lots of problems on a bike. I pretty much ride the pedal spindle exactly under the bone on the ball of my foot. But more important than the forward and back position of the cleat, is how much your heel is in or out. That is what dictates whether your legs go around unencumbered without putting any stress on your knees and hips.

I ride my heels in a lot. The heels of my shoes nearly scrap the chain stays. I think a great way to set this is to walk down a beach in the sand normally. Then go back and look and see how your feet connect to the ground. You could even draw a line in the sand and take a measurement of what angle your feet are at in relation to the direction you were moving.

The Q factor thing is a little more of a puzzle. I try to keep the spacing of my feet close to the same on all my bikes. That means riding my cleats a little further apart on my road bike than I naturally would and trying to get my feet as close together as possible on my MTB bikes. It seems to work best this way.

Anyway, I have no idea why I feel so out of sorts position-wise on my bike right now. It seems to get worse when I’ve been sitting in a car all day and when I get on my bike, it feels foreign. But, that is exactly what I’m going to be doing all day today, driving back to Topeka from Dallas.

Maybe I’ll take some measurements when I get home and see if I’m in the general ballpark of what I’ve done historically. Hopefully, soon, I’ll be pedaling normal again and not be thinking about it. 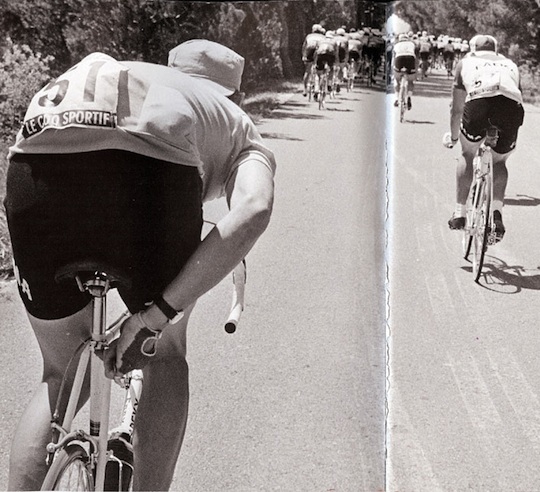 Eddy Merckx was a stickler for position, especially during towards the end of his career. I don’t know how many pictures I’ve seen of him adjusting his seat position on the fly.