I was thinking about how the really small things that happen to you in the sport of cycling can make a big impact on your ability to race a bike fast. Obviously, it takes a lot of mental strength to get to the top level of the sport. I never put much thought into the mental aspect of the sport. That was a big attraction of it for me. I enjoyed, and still enjoy, seeing how I personally deal with situations as they arise. And I like to observe how others handle adverse and critical situations too.

I was thinking about when I really knew that I had a shot at becoming a good bike racer. It was something that wouldn’t seem to be obvious, except to the person it changed.

I can’t tell you where I was or what the year was. I had to have been either 19 or 20. I had been traveling around the country doing all the best races I could get to. It must of been a race up in Wisconsin, maybe a Superweek race, or Wisconsin Milk race or maybe even Boul-Mich in Chicago. We had just finished a hard race and I was just riding back to the parking and Thomas Prehn came riding up and started talking to me. Thomas was already on the US National Team and I knew of him and of his results. He was very good. I was sure he didn’t know who I was.

I don’t remember what we were talking about or why he approached me to start with, we might of been in a break together, it doesn’t really matter. What did matter was when I turned off to go to my car, Thomas said, “See you tomorrow Steve.” I couldn’t believe that a guy like Thomas Prehn would have any idea what my name was. I was perplexed and thrilled at the same time.

I went back to the car and thought it about it and took a huge pride in knowing that he knew who I was. I knew at that time, I must have made some impression on him and that I was breaking into a new level of the sport. It gave me an inner confidence, really changed my perception of myself. One word, my name. It is strange.

Thomas and I went on to race against each other for the next 5 or 6 years until we eventually became team mates on the Schwinn team. We traveled around the country and the world together for 3 years. I got to know him well. I never told him this story. By the time we were riding together, we were peers and friends. And it didn’t really seem to matter. Now, looking back, it was a pivotal moment of my life. It might have happened anyway, some other obscure sign or way, but now looking back upon it, I’m glad that it was Thomas that said my name. 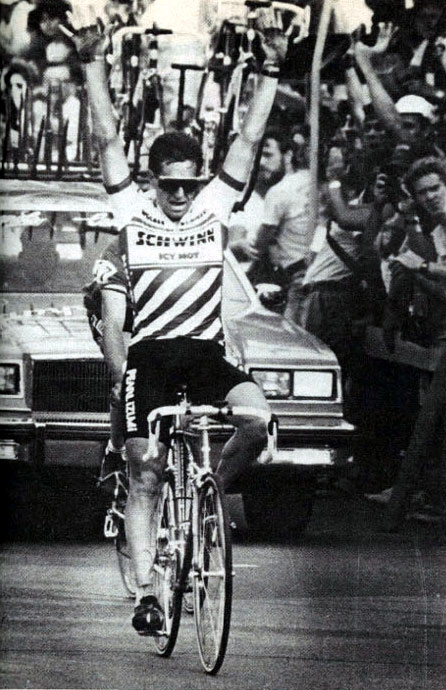 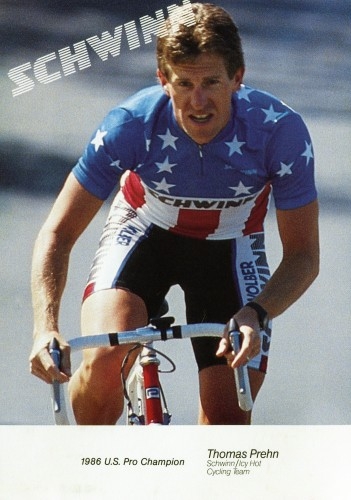 This is his hero card from when we were team mates.

7 thoughts on ““See you tomorrow Steve””