My friends that I’m staying with, Don and Sue, their dog Ranger is going to have major surgery this morning to remove a couple tumors from his jaw. He had cancer a couple years ago and it was not unexpected for it to return. Anyway, the good news is that it hasn’t spread into Ranger’s chest, so he can hopefully be back to normal in a couple months. The vet says that he is going to lose one of his eyes, but this dog is so quick and prey driven, that is hardly going to slow him down. Anyway, wishing Ranger the best. 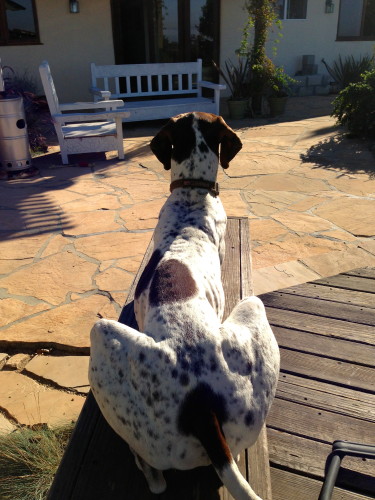 Here’s Ranger hanging with me yesterday when I was posting my blog entry. He is a very loyal friend.

My old team mate, Thurlow Rogers, called me about riding out East up Kitchen Creek, but I couldn’t get out to Alpine by 8:30. So, I rode up into North County, Rancho area, and explored a little. I was riding some of the roads I knew, but decided to try to stretch the ride out. Next thing I knew I was at a T intersection with two private gates and a security guard. I asked him if either road went through, but he said they were private. I told him I was sort of lost, and from Kansas, but that didn’t help one bit. He pointed at this primitive dirt road and told me that it went to Elfen Forest, but was only for off-road vehicles and MTB bikes. I said it looked fine to me, but he told me that I shouldn’t try it on my road bike. Little did he know that it was really a cross bike with road tires on it.

Anyway, it wasn’t that long, only a mile or two. It was super steep and pretty slow, but I was fine. I ended up back on pavement, made my way back to the coast, stopped at Pannikin for a coffee and made it back to La Jolla just when it got dark. 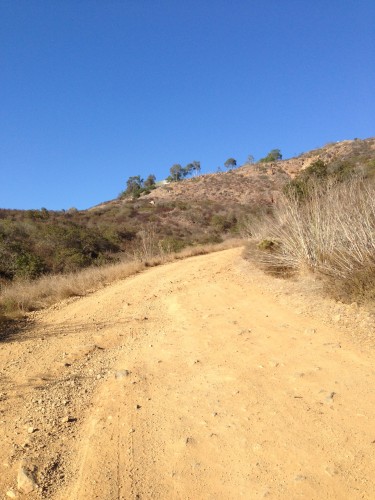 The smooth part of the dirt climb. 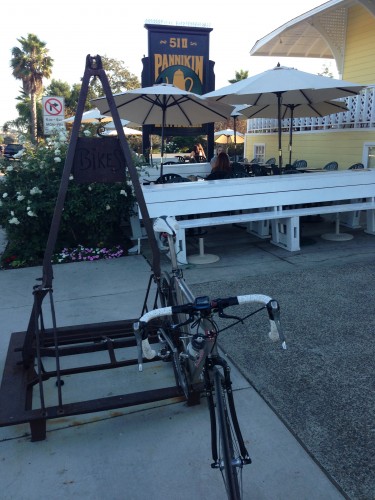 This Strava thing is bugging me here. I coast off of Mt. Soledad everyday here. Down Via Capri, which is a street, dangerous street. Two days ago, I didn’t have any traffic ahead of me and road down it pretty clean. When I downloaded it to Strava, it said that I was the 3rd fastest down the hill out of 700 + people. So, today, just leaving for the ride, I tried again. The problem was their was too much traffic. I need at least a 45 second space with no cars starting down the descent, so I don’t have to brake at the bottom. It never occurred. I waited up there for 5 minutes or so, but just when I thought about going, another car would come. Finally I gave up and just went down. There are way too many cracks in the concrete, some parallel with your direction, to classify this descent as anything except dangerous. At least over 40 mph. So, even though I thought I was slower today, I was 3 seconds faster and only 2 seconds off the fastest time. That guy rode down the hill pretty great. I’m riding my cross bike out here, so I’m not that comfortable going that crazy fast, but the whole issue is bugging me. I know it is a silly thing, meaningless really, but it is still there. I need to think it through some more so I can just disregard it. Or just ride down the hill 3 seconds faster. (The ride is posted at the top of the column to the right.)

Okay, I need to get going early today. Doing a North County ride and then heading up to Orange County for some business stuff. I hate riding this early, especially when I start, but when I get back it doesn’t seem that bad. 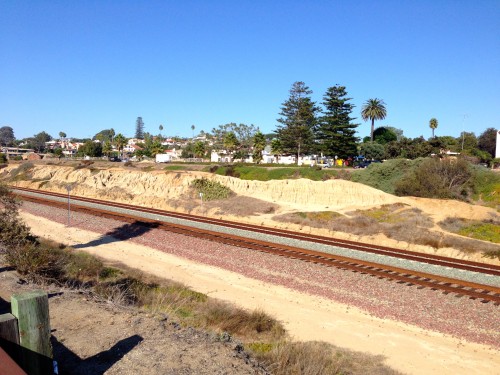 This is along the coast hwy. just North of Chesterfield in Cardiff-By-The-Sea. This is the first trail I ever rode a MTB on. Back in 1983. 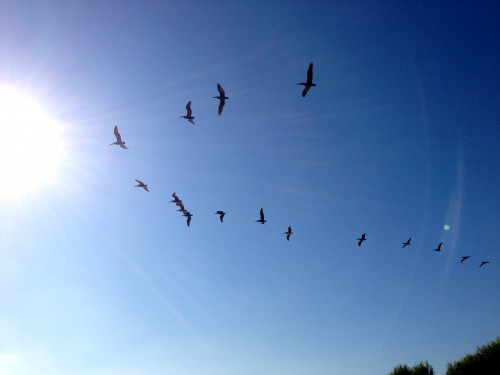 These pelicans escorted me most of the way back South along 101 today.