I’ve been thinking about this for the last 24 hours and still don’t quite understand all the factors involved for me to win the Berryman Epic on Saturday. It was a perfect storm of factors as far as I’m concerned.

I guess I should start from the beginning. I was shit. And that would be an optimistic description of my pre-race feelings. I just wasn’t there. I warmed up a bit, in the cool 30 degree temperatures, and realized that I didn’t have it. But, I knew that would only be part of the equation for the day and should put in my best effort.

The short description of the race is this. Around 250-300 riders started. It’s somewhere between 56-60 miles long, depending on whose Garmin you believe. It is around 45 miles of technical singletrack and 15 miles of gravel road. This year the singletrack was covered densely with leaves. Like inches and inches. I’d bet there wasn’t a total of 3 miles of the course that wasn’t leaf covered. That changed the race up a ton. The race starts straight up a hard gravel climb, probably a little less than a mile long. Then a couple more miles of gradual uphill and gravel before turning into the singletrack.

I didn’t really talk to the guys that finished 2nd, 3rd, or 4th afterwards, so I don’t have the information to help me understand why I won. I only know what I did and how I rode. It happens that I won.

The race started super slow compared to past years. We crawled up the hill, in my opinion. That being said, there were only a few guys left at the top. It levels out and we still stayed slow. There was $100 prime for the first rider into the woods. I won the prime, but not without making a little sketchy move to Garet Steinmetz’s inside. I thought that maybe it was going to be all my prize money for the day.

I rode the next hour and a half with just three others, Dwayne Goscinski, Garet Steinmetz, and Drew Edsall. I was firing all wrong. From square one I was bad. It was much like the last day in Tulsas last weekend, but worse. I’d have to compare it to the Apollo 13 space mission. But, it wasn’t like I launched with all systems go. Like Apollo 13, I was without enough oxygen from the get go, along with a ton of other issues.

Drew took over the lead pretty early on the singletrack when I flailed on a short climb. Dwayne and Garet were on me, never more than a few seconds back. On all the climbs, Drew would disappear up the trail, only to come back again a little while later. I was going so badly, I truly was wishing that he’d just get out of sight, so he would be out of mind. Instead, he was this carrot just hanging there.

I can’t explain it still, but Drew just kept coming back to us. My only explanation is that he was thinking that it was going to be a long day on the bike and it might be better riding with a group. Or, because of all the leaves, that were covering lots and lots of rocks, he was having issues leading and thought that riding behind someone would be better for a while. Whatever the case, Drew was with us when we got to the 2nd checkpoint at the Berryman Campground 1:40 into the race. I got a bottle, some thinner gloves and a flask of espresso there. I nearly missed a turn into a singletrack, but Dwayne yelled to me and got me back on track.

Here is where the race got weird, at least for me. I coasted down the next short section of singletrack pretty clean. It is probably my favorite part of the course. Right afterwards you go over Highway 8 and start the second of 3 sections. I rode over 8 and glanced back and saw I was a few seconds ahead. There is a race constructed bridge over a small stream, then some sand and finally a couple hard climbs that are short, but steep. My left hamstring was already ready to cramp, it was pretty much done. I thought that if I sat on the climb, my hamstring would have seized up, so I made a decision to lock out my fork and climb off my seat. Normally climbing off your seat on leaves and loose rock isn’t the best idea, but I was hurting for choices.

I stood and rode up the first climb as hard as I could, which was pretty much as slow as I could go and stay on my bike. It flattens out a bit and then climbs again. I descended off these climbs and looked back again. There was no one. I couldn’t understand it. All three of the guys I was with were going better than me uphill. Especially Drew.

So, then it started, the mental challenge. The rest of the race, which was close to 3 more hours, was just trying to maintain. Trying to cope with small fires.

Here’s what I did. I convinced myself that I was good enough to win the race, even in my pitiful state. The night before, I’d looked at the results from last year and saw that 3rd was nearly 20 minutes back on me. So, I figured that I could ride over 4 minutes an hour slower and still be competitive. The conflicting side to this rational was that I didn’t know Drew Edsall and Evan Plews. As far as I know, I’ve never raced against them. On paper, they were both guys not to take lightly. But, Even wasn’t riding with us the first section and Drew was now behind me too.

Anyway, I did a complete systems check and realized that I wasn’t going to get any better physically. If anything worse. I decided that I should do the best with what I had. So, I decided to just try to make it up the climbs as best as I could, without cramping and then ride all the descents super clean. The leaves made the descents very tricky and it was super easy to miss a corner or lean too much and lose time over and over. I didn’t make many mistakes after that point. I finished the race without a drop of blood, which is very unusual for me. I never fell once.

I had to regroup at least 50 times, no actually more, lots more. I broke the rest of the course into small segments and then just tried to ride to the end of each segment and then start again. I usually don’t have to make up these little games to race my bike, but this was a special situation.

There is a 6 or 7 mile road section connecting the end of the second section back to the last and final section. I ate a ton on this road. Two full bags of cubes, two gels, and the flask of coffee. I had been feeling like I was bonking for the past couple hours, nearly from the start.

I rode back up to the entrance to the Berryman Campground, which is a long road climb. I felt like hell. I got a Coke and another bottle and started out of the checkpoint in the wrong direction. If I wouldn’t have heard Trudi tell me to go a different direction, I would have been lost once again. I drop the can of Coke and it burst open. I picked it up and drank the remaining bit out of the shredded can.

This started a high point of my race. I rode the next 5 miles pretty good. I was in my big ring and riding nearly normal. Granted, there wasn’t much climbing here, but I was optimistic that maybe I was coming around. But, in my whole time of racing MTB bikes, this had never happened, so I don’t know what I was thinking. When the trail started going uphill again, I wasn’t good again. But, something else happened during this time too.

It started getting very hard to follow the trail. The leaves seemed thicker and there wasn’t so much elevation change, so it all looked like a blanket of snow, only leaves. I had to stop at least 5 or 6 times and just stare into the woods. A couple times I had to walk back 50 meters or so and try to figure out where to go. Most of the time, the course had cut back on itself and was heading a different direction.

I forgot to mention, that I was having some serious vision problems with my right eye. Somewhere very early in the race, I thought I got something on my glasses, so I put the glasses in my pocket and it was better, I thought. But, later on, I couldn’t see very well. I closed one and then the other, and realized my right eye was having issues. I sprayed water into it a few times, but it didn’t help. So, seeing the trail wasn’t that easy. (I’m going to the eye doctor today hopefully.)

Anyway, I didn’t get lost and rode the last of the singletrack up to the final 6 mile road section alright. I was so done that I ate two more caffeinated gels the last 6 miles. I was crawling, but I didn’t look back more than a couple times. I was going through the whole day in my mind and didn’t understand it at all. I still don’t understand it much, even now.

I know I’ve dragged this out. I guess I was trying to figure it out some still. I’m not surprised much in bike racing, especially MTB racing when it is mainly you against the course. I know that I have a ton of experience in lots of different conditions. All I can think is that the leaves covering the rocks made the conditions uncomfortable for some of the others. It’s the only thing that explains the big time differences behind me.

Anyway, I have to admit the day didn’t go as I had thought. That is one of the things I love about the sport so much. It is a continuing learning process. I know this is going to sound kind of weird, but winning the race wasn’t such a big deal. Of course, I like winning bike races. It is a confirmation of what you’ve been doing in life to prepare. But, I’m not that big on winning racing while not riding well and I wasn’t really prepared. Maybe that isn’t exactly right. I just wished I would have been a little better physically, so I could have enjoyed the 4 and 1/2 hours in the woods just a bit.

Scott, Jake and his helpers put on a very, very good bike race. They all have so much enthusiasm for the sport. The awards banquet was awesome. Lots of fun, good stories, camaraderie. I forgot how much I miss MTB racing. I need to do it much more.

Okay, that was a long one. 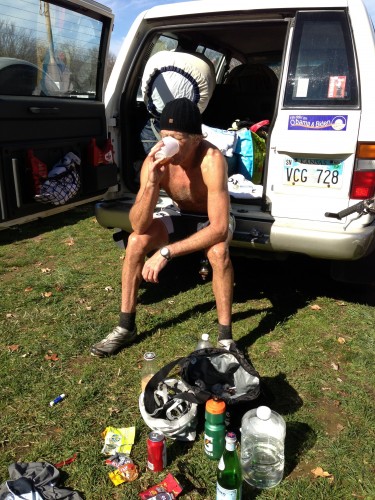 This pretty much sums it up. I was pretty destroyed. Lucky, the beer was flowing as soon as I crossed the line. 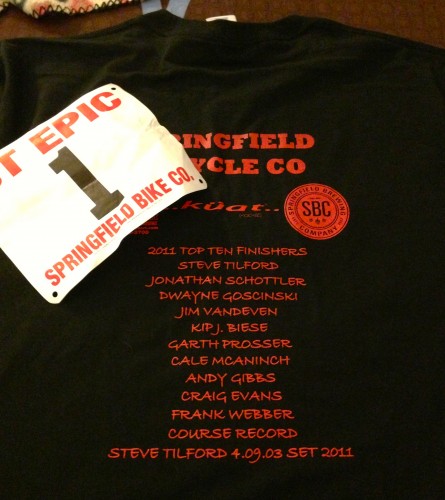 The T-shirts are a results sheet from the previous year. 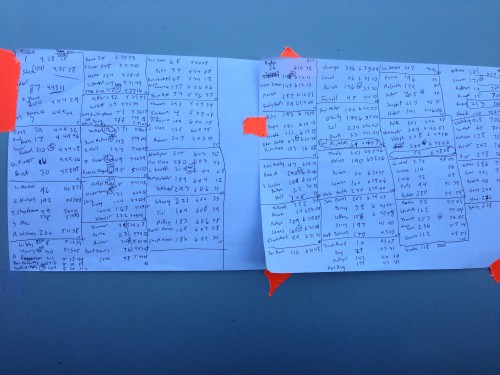 There were computer printer results, but I thought these initial results were more appropriate. Click to enlarge and try to decode. 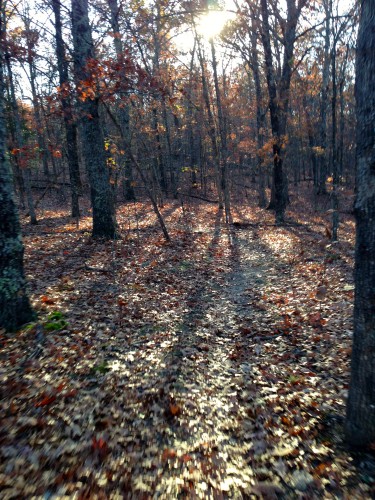 This is how it looked most of the way, minus the hills. 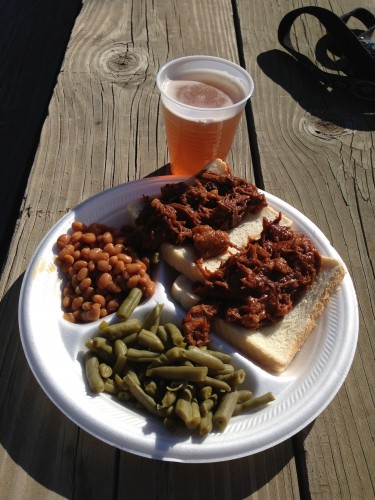 Every rider gets a free meal. I usually don’t eat food like this, but this food was great. 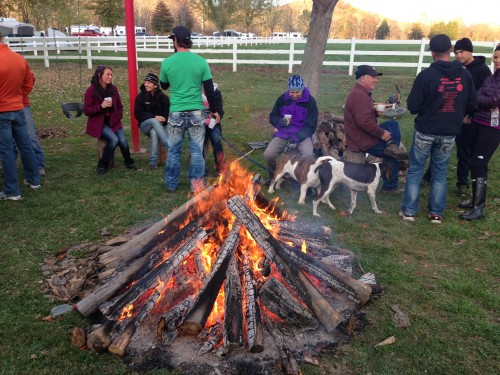 Any race that has a bon fire at the finish is a race I’d like to attend. Plus, lots of dogs running free. 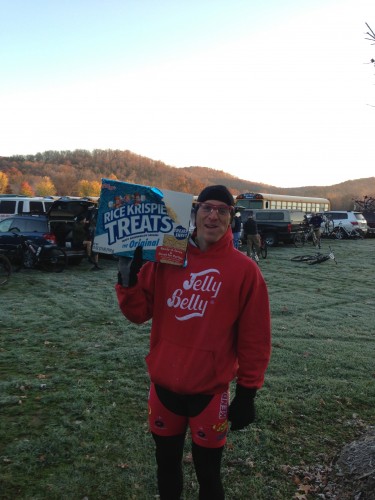 Brad Huff with his pre-race breakfast.