Riding around the university after midnight last night got me reminiscing about how much I used to ride and even train at night. When I was in high school, I worked at the local bike shop, Gran Sport. The shop started in the early 70’s, when the European bike boom first got rolling. Before then, you pretty much had a choice of a Schwinn or a Schwinn.

Anyway, by the time I was working at the shop, I was already into racing. I liked to ride with my friend, Ed Bauman, who pretty much managed the shop. The shop closed around 6, but we were never out of there before 7:30. It was one of those shops that people just kept hanging around way past closing hours. Customers and employees.

After daylight saving times ended, it got dark at 5:30. So by the time we were riding it would be pretty much pitch dark. We’d just ride around town a lot of the time. We used to do these time trials over at the university, a criterium on sidewalks around the bell tower. We would time our laps and do them all night. I think that is one of the reasons I learned how to corner well early on.

But sometimes, maybe twice a week, we would train out in the country. No lights. It was never more than 30 miles. The weird thing about it, at least it seems weird now, is that no one in an automobile would bother us the least. No honking, no yelling. On top of no lights, we never stopped for a stop sign or stop light. And no one cared. I guess it was the era where everyone rolled stop signs on bikes, I don’t know, but it never crossed my mind to stop.

We’d see police pretty often. Sometimes when we were done we’d stop at Dunkin Donuts and see police there. It’s true. Anyway, the most, maybe, a cop would say would be something like, “You know it is a lot safer riding with lights at night.” And there was a law, I’m pretty sure, that said you have to have a light on your bike riding at night. I think the police were a lot more lenient back then. It wasn’t like they were always out to get a hold of your license, looking for outstanding warrants. It was a time of common sense, even though riding out on the county roads at 9 or 10, without lights, doesn’t fit that category.

Riding around yesterday, I didn’t have any lights. Our roads are so horrible, it is dangerous riding around without being able to see that well. It is amazing how easy it is to forget how great the roads used to be compared to now. They just got incrementally worse, year after year until they are like they are now. Potholes most of the year and cracks running parallel to your wheel everywhere. You have to be pretty heads up at night to not have an issue here in Topeka.

I think that is a funny thing about life. When change is slow, you don’t notice it as well. I was watching some of the presidential debate last night and they were talking about the price of gas when Obama took office less than 4 years ago. They both used the number $1.86. It caught me by surprise. It seems way too low. I swear I can’t remember that at all. Gas less than $2 only 4 years ago? Strange.

Anyway, now, we have a huge selection of lights that are awesome. I don’t really own any, but I know they are out there. I don’t even have a blinky light. I’m not too worried about getting smashed by a car when it is dark out. There are too many other things to worry about.

Both Friday and Saturday nights in Tulsa, the races are at 9 or 10 pm, under the lights. I like racing late, when it is dark. Everything seems to come at you faster, making your decision making process that much more important. I will enjoy that aspect of the weekend, but the rest might just be a suffer-fest and for sure a reality check.

I went over to the cyclocross practice tonight and did the first real efforts I’ve done in over a month. We started out with 10 starts of about 200 meters. That hurt me. But, after that we did a short loop, with a hill and a set of barriers in it. It was less than 2 minutes long and I only made 2 before I pulled the plug. I had that asthma like feeling in my lungs, along with that taste that goes with it. I was still coughing a couple hours later. That wasn’t a good sign and not good for my mind. I know it’s early, but I already feel behind. Funny how that is. 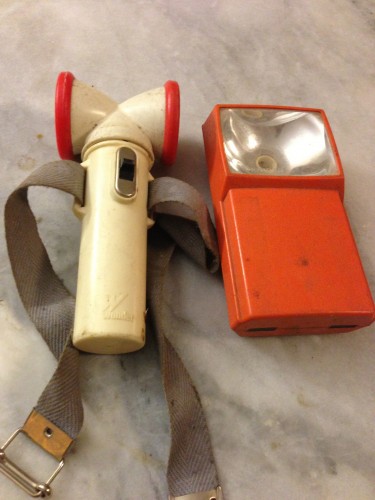 These are the lights from when I first started. A leg light, which everyone owned, but they never worked, and a Wonder Light. The Wonder Light had a plastice bar mount that clamped onto the handlebars. I found these in the basement. Didn’t seem to locate the bar mount, but I know it’s there somewhere.