Even though it is over two weeks before daylight savings time rolls our clocks back an hour, it seems like it is the time of the year where everyone riding bikes sort of go their own ways. At least around Kansas, it is that time where the evening rides are getting much smaller and smaller.

The evening rides started meeting at 5:30 a month ago, but with the sunset shortening the day by nearly 2 minutes each day, it is amazing how much difference just one week makes in how far you can ride. Right now the sunset here is around 6:45pm. Next week it will be only 6:30. No one will come after that.

It is strange to me how quickly there becomes a huge difference in rider’s abilities at this time too. One of the best things about the cycling is that people of much different athletic abilities can go out and train together and everyone gets a good workout. Drafting in our sport makes that possible. The aren’t many sports like that. But, one thing that happens, sometime soon, is that the differences in abilities seem to spread. I think it happens everywhere.

Plus, here in Kansas, our falls and springs tend to be pretty windy, so the time when lots of guys are losing their form, the wind picks up and makes it just that much harder to spend time on the front. This is the time of the year when I end up on the front most, if not all of the ride. I don’t really mind it, but sometimes it would be nice to be out of the wind some.

Cyclo-X has changed our fall and winter training some. Guys racing on the weekends do tend to stay a little fitter than before, but that being said, I see these guys a lot less because they are training specifically for cross and don’t ride the evening rides.

I normally train with others. But, this year, I haven’t been doing that nearly as often. I’m not sure why that is. Probably because I’ve been hurt a bunch and want to do exactly what I think I need, but whatever the reason, I’m kind of likin’ it. I think it is important to spend some time on your bike solo to allow your mind to clear. That is one great thing about riding, it is a huge mental massage.

I heard this thing on the radio today about how if you sleep on an issue, you make a better decision. I think that is the same with a bike ride. Even if you don’t consciously think of the subject of what you need to figure out, riding allows you to work through thoughts that might be buried deep. It is super cool.

Anyway, it is a beautiful fall this year in Eastern Kansas. Better colors than I can ever remember. The weather has been great. It has only rained once in a month. We are way, way behind on rain. We’ve only had 19 inches of rain this year, normally it would be around 34. If the Climate Prediction Center is correct, Kansas should expect above-normal temperatures and near-normal levels of precipitation for the months of October, November and December. That is good news for riding. We have nice winter riding weather.

I’m going to be racing this weekend in Tulsa, the first cross races of the season for me. 3 in a row. It’s hard enough doing three cross races in a row when I’m fit for cross. Doing this the first weekend might be sort of silly. I think I’m going to do some dismounts and mounts at the local cross training ride on Wednesday. Not so many to get really sore, but hopefully enough to be proficient. Yesterday I did the first real effort I’ve done in a month. It was for 2 miles. I didn’t feel that bad, until it was over, then I was gassed. My body is not going to like me after Sunday, but you have to start somewhere. 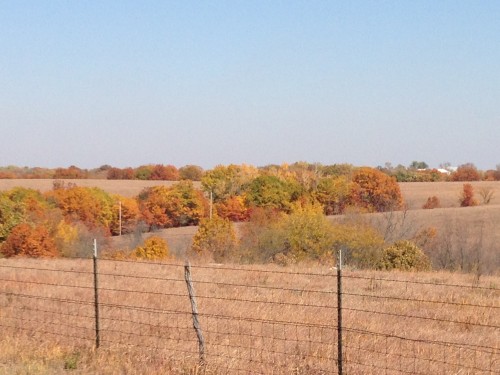 There aren’t that many trees out in the the country around Topeka, but where there are, they are great. 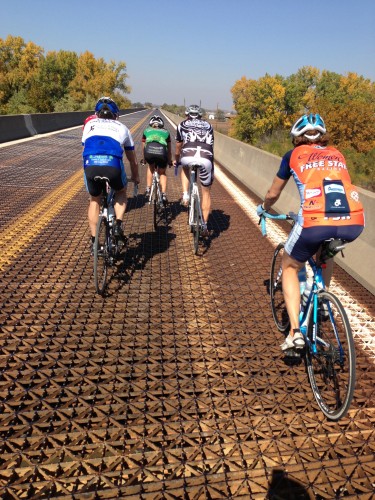 Riding Sunday across a metal bridge West of Topeka. 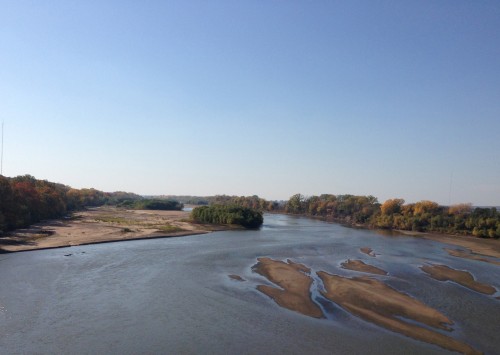 The river is so slow and the water so low that there are trees growing on the sandbars.

9 thoughts on “Fall/Winter Riding has Started”