Back in the 80’s, when I was sponsored by Levi’s, I was walking through Ghirardelli Square in S.F. I was out there with Michael Fatka and Andy Paulin, who lived South was with us too. It was kind of late at night and the square businesses were closed. We were just window shopping and there was a guy walking around, checking to make sure the doors were locked on all the businesses. He was talking on a radio. I noticed that he kept going by this big bag on the ground and messing with it. When he was checking another door, I walked over to where the bag was, and laying there was a huge manta ray fish. I called over to Michael and Andy to come over and look. Right then, the guy comes running over and starts yelling, “Get away from my fish!” I backed up and realized that they guy wasn’t a security guard, but a street person. He was just talking into his fist, acting like he was talking on the radio, making static and all. The guy really didn’t want anyone anywhere near “his fish”.

I’ve been on my back working on the Isuzu for the past two days. It is close to the worst thing I could be doing for hurt ribs. Hurt ribs and concrete are like oil and water. This morning, when I was out in the driveway, I noticed a parked car in front of my house. There wasn’t anyone in it. I was wondering what the car was doing parked in front of my house. And I was mildly perturbed that someone, I didn’t know, was parked there.

I think it is really strange how Americans, or maybe people from other countries too, take such a stance on possession. I don’t really understand why our society has strayed so far from reality when it comes to “our” stuff. I’m guilty here too.

When I was a kid, I lived in a pretty active neighborhood. Lots of kids on my end of the block, older people on the other end. But, other than maybe one house, there wasn’t a yard that I couldn’t go into. There wasn’t a house, that if I hit it with my Frisbee, that I would be worried about the people coming out and yelling at me. I knew them all by name and they knew me.

When I first started riding bikes seriously, there weren’t any other cyclists on the road, other than school kids. No one would ever honk their horns. No one yelled, pissed that I was getting in “their” way, using “their” road. Now, we all know how that is.

Now, I’m not sure why, but it must be through a slow evolution, people tend to be exactly opposite. They don’t want anyone on their property, no matter what.

Kansas has less public land than any other state, I believe. I think it is less than 2% public. Somehow, people in Kansas think that they should own everything where they live. What they don’t realize, is that each and everyone of them/us, are just temporary tenants on the land. That all of the time, the land out lasts us, and most of the time, our houses do.

Unless you live in brand new construction, you are living in someone else’s house. And someone else is going to be living in it eventually, most likely before you die, but nearly for sure after you do.

So, I don’t get why we are so protective of something that we really don’t owe forever. We’re just care takers.

This all came about because I was running Bromont around the block and some guy yelled to me about Bromont cutting the corner through the guys yard. I stopped and talked to the guy and eventually it was alright. But, still, why get all worked up because a medium sized dog runs through your yard. It wasn’t like he stopped and left something there. Bromont was just bending over the guy’s grass, at Mach 5.

I can’t imagine how pissed the guy would have gotten if it would have been a few school kids walking there. Even if that was the case, it’s not like they are doing any damage. It isn’t like the people that live there don’t walk on their own grass. It seems to just be the principle of the action.

Another example is our cars. Cars get dings in them, it is part of the deal of car ownership. And every time that someone, by accident, opens their car’s door and happens to ding mine, it pisses me off a little. But, come on, do I really expect anyone to leave a note and their phone number? I don’t and they shouldn’t. It’s inevitable and just part of life.

Somehow, we all need to change our mindsets about our possessions. We, this generation, has more stuff than any previous generation of Americans. There are more cars, more houses, more of everything than there were just a few years ago. And lots more stuff than there was a generation ago, not even addressing two generations ago. What is hard to understand is why people were less possessive of their stuff two decades ago, when there was less stuff around?

I don’t know how to fix the problem. I guess, for a start, it would be great if everyone tried to meet their neighbors. Maybe even know the names of the all the kids in the block. But, that isn’t going to happen quickly. I, for one, am going to try to be much more tolerate of people. try to not get so worked up about something that is very small in the big picture. I think this is going to have to be a conscious process. Somehow, we’ve all be brainwashed into where we are now. We’re going to have to try to ignore some of our greedy initial reactions and logically think it through. Let’s let other people look at our fish some. It doesn’t hurt anything. 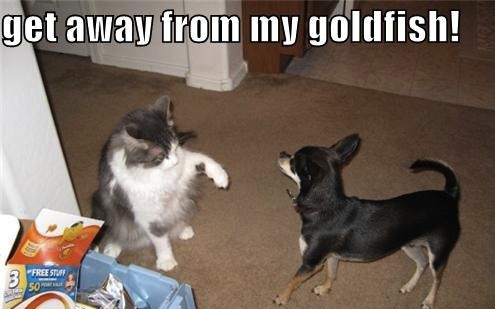 12 thoughts on “Get away from my Fish”