The kid that won the Junior World TT, Oskar Svendsen, a couple days ago, supposedly has a VO2 max of 97.5. I’ve never heard of a number anywhere close to that high before. And he did it on a bicycle no less. VO2 max of cyclists tend to be lower than some other sports, cross country skiing for example, because they don’t use as many muscles, thus less oxygen uptake. Here is a link to a article from ProCycling Norway. If the machine was calibrated correctly, and the number was correct, the boy should have a good chance of being a very, very good cyclist.

If you’re not familiar with VO2 max. it is how much oxygen uptake that a person can consume. It is measured in milliliters of oxygen per kilogram of body weigh. Most Tour de France winners are in the high 80’s. Here is a list of normal VO2 numbers. 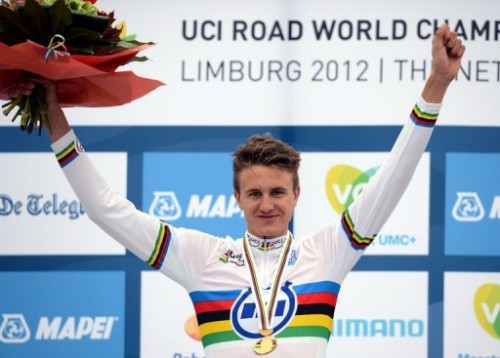 Oskar proudly wearing his new World Championship jersey. He won even though he was sick earlier in the week. Guess all that extra oxygen helped him recuperate.