I am the holder of title that no one else in the sport has, I’ve won the US Professional Cyclocross National Championships. Twice, actually. Back in the early 90’s, when the USCF and PRO were trying to merge and become one, after a little encouragement from some of the PRO riders, they decided to hold the National Championships for cross as both a PRO and amateur event, raced together. And award two jerseys, one for the first amateur and one for the first Pro.

The first year it was held in Boston, where Don Myrah won the event, but I won the Professional title. Then the next year the race was held in Golden Colorado where Mark Howe won the event and I again was the first Professional. I’m not really sure why I was classified as a Professional and those guys were amateurs. I think it might of been because I held a Pro road license and cyclo-x was technically an aspect of the road.

I’d won the Nationals in ’83 and ’84 and did not race them again for 7 more years. The reason was I wasn’t getting enough feeling of personal accomplishment anymore for training for an extra couple months for one race. And I was winning the races by huge margins. I was racing Professionally on the road and when the Tour of the Americas and bigger events started occurring early in February-March, cross just didn’t seem as important.

But when they put a Professional title into the mix I got interested again. One bonus for winning was that you didn’t pay entry fees into races if you were a National Champion. And since cross was technically a road event, that meant no entries for all season, which was substantial.

Both in Boston and Golden there weren’t that many Professional road riders at the race. I think in Boston, my ex-Wheaties/Schwinn team mate, Tim Rutherford (Jonny) was who I was worried about the most. He rode MTB professionally for Ritchey with Thomas Frischnecht. The next year in Golden, I believe both Frank and Mark McCormick were now PRO, so obviously they were on my radar.

I didn’t win either of the events outright. I had pretty good form for both races, but I had some issues. In Boston, I crashed pretty hard on the road when Don Myrah got away and lost a bunch of time. Tim passed me and by the time I got a new bike and got past Tim, I felt it was in my best interest to play it safe and just stay upright and win the jersey.

Golden was a different issue. I didn’t plan on going, but decided last minute. I don’t do well racing short, intense races at altitude, without being acclimated. I went out the day before and was staying with Roy Knickman in Boulder. There was a ton of snow on the ground and the course was super icy. From some reason I got a bad call up, or maybe just a bad start, but coming to the first dismount, someone fell and stuck a pedal into my from wheel and ripped out a bunch of spokes. My brother Kris, had driven out all night and was in the first pit with my MTB bike. By the time I got the bike I was buried.

It took me a while to get used to riding my MTB. I had only warmed up on the course on my cross bike. Kris put a new wheel on my cross bike, but by the time I rode a couple laps on the ice on my MTB bike, it felt better. So, I proceeded to march back up through the field. Obviously, there were riders going a ton of different speeds on the ice. Eventually I got up to 2nd place in the race, but had no idea who was winning. We were lapping so many riders that it was just a steady stream of guys.

I think I ended up “losing” the race by around 30 seconds, I’m not sure. I was pretty okay with just winning the Professional title considering how bad a start I had to come back from. I remember asking Roy who won and what he was wearing. I didn’t know Mark Howe at the time. He was racing a MTB too. (That was before the rule that made it was illegal.) I think Mark was jumping the barriers. He worked for Rock Shox, I believe, and said his shock helped him in the icy conditions.

The next season, it just became a race for one National Championship, ( and I took another 7 years abscence) so unless sometime in the future, they go back to awarding two different jerseys, I have the only two US Professional Cyclocross titles ever awarded. I wonder where those jerseys are?

Also, don’t forget about the Cross clinic I’m doing this weekend put on by Source Endurance. Zach McDonald and a bunch of other guys are going to be helping. You can click here to register. 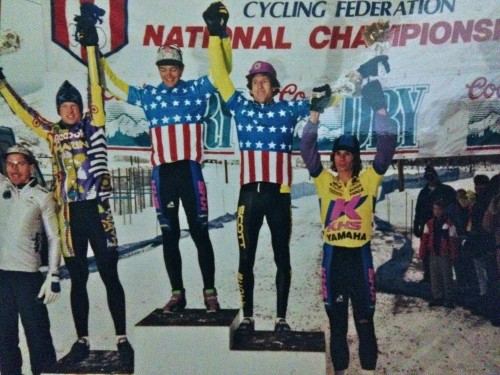 The podium in at the 1992 Cyclocross Nationals in Golden, CO. 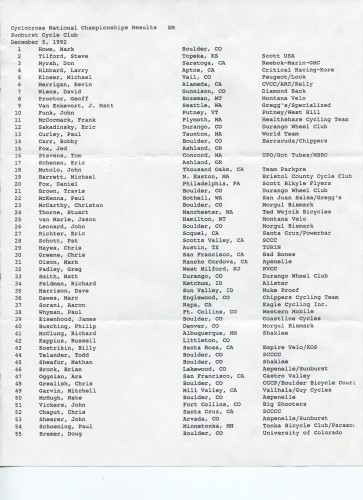 The results from that race. Click twice to enlarge.