Okay, last “race report” for a bit and we’ll get back to more fun stuff. Yesterday was Benton Park. It is a super cool race in a up and coming area in St. Louis. The course is really challenging. It is maybe the hardest criterium of the year in many respects. I’m not sure what the deal with the course is exactly, but it is like a M.C. Escher drawing. The course seems like it is uphill the whole way around. Plus, headwind the whole lap too. In previous years, only like 30% of the field finishes. And the race is only 80 minutes long.

I knew the break would be gone instantly, within the first 15 minutes, it always has. I got into a move with the right combination on the 2nd or 3rd lap. I didn’t hardly warm up a pedal stroke because it was already super hot and muggy out. But, that didn’t matter. The break never got too far ahead and we got caught in just 2 or 3 laps. Brian, who came the to St. Louis the day before to join us, immediately attacked and rode away. There are lots of guys in the field that know how strong that Brian is and the best of them followed.

Eventually a huge group of nearly 20 guys formed off the front. That wasn’t good for just about anyone, so it had death written all over it. The stayed away for 4 or 5 laps and right when we reabsorbed that break, Brian went again and it was done. It was exactly the right combination with Jelly-Belly, Kenda, Harley-Davidson, Mercy and us all represented.

And that was it. There isn’t much more for me to write about. The break of 7 stayed away. Brian ended up 6th, which he wasn’t good with at all, but someone has to end up in that place. He started attacking the break, maybe too far from the end, with 6 laps to go. It pissed one of the Jelly-Belly riders off enough he kind of mocked Brian and asked him if he thought that he was Lance Armstrong. Brian asked me after the race what I thought that meant. I told him it meant that he was hurting them and they were trying to use intimidation to slow him down. It might have worked some. The year before, Brian was in nearly an identical break and the sprint didn’t work out so well for him, so he decided he wanted it split up. So he made his best effort into doing just that. It didn’t work out so well for him, but that is bike racing.

Back in the field it kept splitting into small groups off the front. Eventually nearly all the places were up the road. I was tried of the race and just wanted it to be done with.

With 2 laps to go, I noticed the race leader, Brad Huff, Jelly-Belly, go over to the edge of the course, on what seemed to be the only downhill section, which was pretty abandoned of spectators. Brad proceeded to pee off his bike. It surprised me for a couple reasons. It isn’t like I haven’t seen or done it myself before during a race, but never during a criterium. And 2, I couldn’t understand why he just didn’t wait the 5 minutes and we would have be done. Whatever the reason, it was very impressive.

So, the weekend is over. I don’t feel any worse, illness-wise. Not any better really either. I’m not sure if the racing is going to help for Chequamegon two weeks from now. I needed to race pretty badly and that is just what I did – race sorta badly. I’m planning on doing my heat training thing and ride back and forth to Lawrence, super slowly, this time on my MTB for the next few days. It is supposed to be in the upper 90’s most of this week and I just need some slow miles to hopefully reset. If not, Chequamegon is just going to be a tour in the woods of Wisconsin. 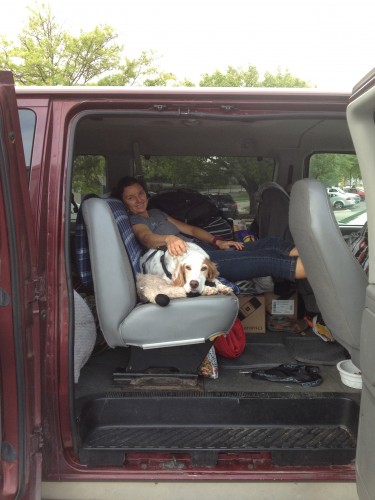 Trudi getting a little last minute Bromont time before having to head off to Canada. 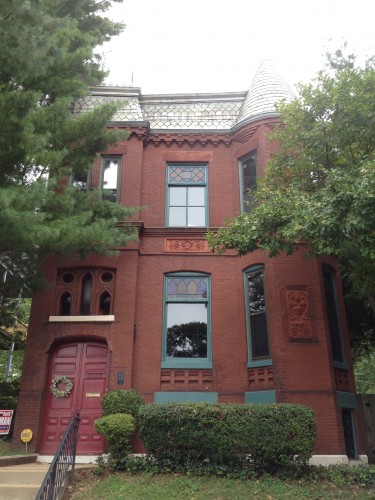 The architecture around Benton Park is super cool. 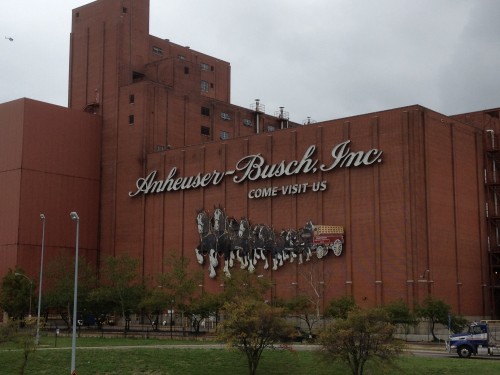 The race goes right by the Budweiser brewery. 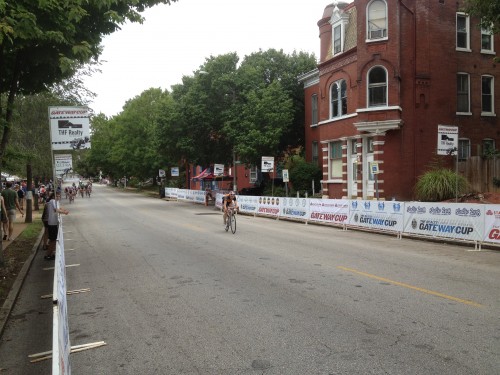 This isn’t a very good photo, but the women’s races were great. Laura Van Gilder had a hat trick, plus one, winning all four days. Skylar Schneider, Sam’s little sister, from Tibco, finished 2nd yesterday, and 2nd in the overall, to Laura.
It was her birthday yesterday and she just turned 14. Pretty unreal. 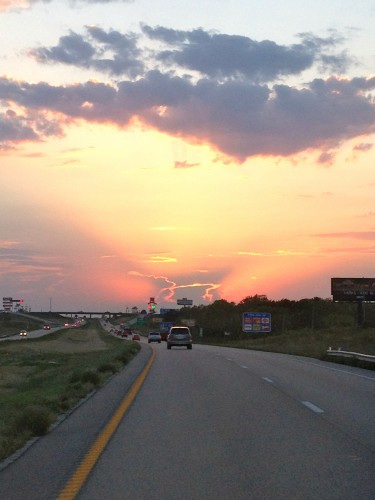 The sunset driving back yesterday was unreal. 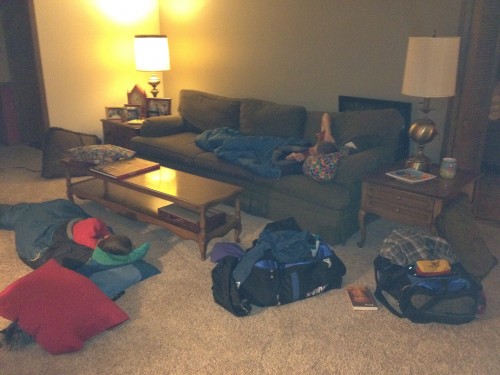 My friend, Paul Biskup, was driving through last night and his kids were camped out in my living room. 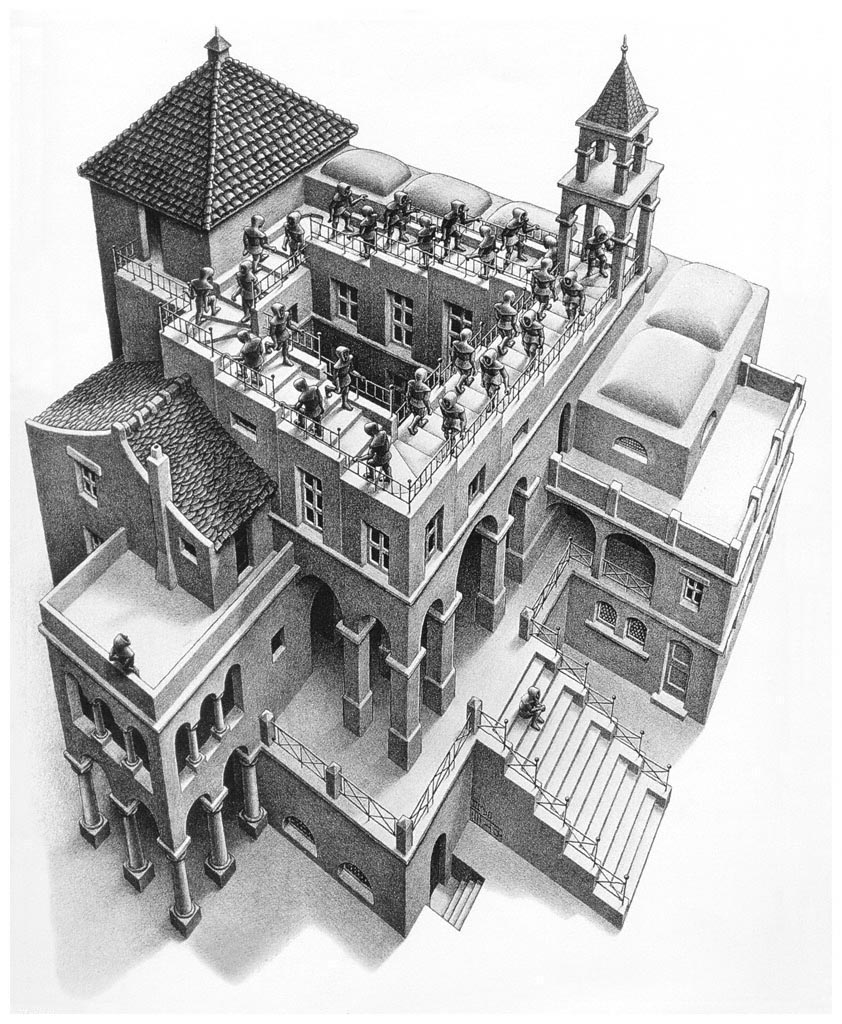 M.C. Escher is one of my favorite artists. His drawings always make you think.