I have to get on my bike and ride over to Breckenridge to met up with Trudi and watch the start of the Pro Challenge stage right now, so am pretty short of time. But, obviously, the “Lance News” is the biggest news of the today.

I obviously have no first hand experience to whether Lance doped other than personal observations racing against him. That was enough for me to make a decision. But, when Floyd came out and spelled his guts to the press a couple years ago, right before the Tour of California, and Lance responded, I knew Floyd’s statements were true. I watched Lance do an interview with Johan standing by his side, responding to Floyd’s accusations. He said something like, “This isn’t new to us. (He always talks in plurals.) We’ve know about this since day one. Floyd called me as soon as he got the positive test back.”

I knew from Floyd, and through the media, that Floyd and Lance weren’t friends. That they didn’t really get along at all. I thought, “Why would Floyd call Lance first?” The only answer I could come up with that made sense was that Floyd knew that Lance was involved deeply with his doping and that he had ties that could help him “get rid of the problem”. I also though, “This is the reason that lawyers don’t let their clients make any statements.” It sounded so innocent, but told so much.

Anyway, I feel badly that this saga ended this way. You should click here and go see what Anna Zimmerman wrote about the end result. I agree with most everything she has written.

The one upside to this is that we can now put it to rest and go on with doing what we enjoy, which is just riding, and sometimes racing our bicycles. 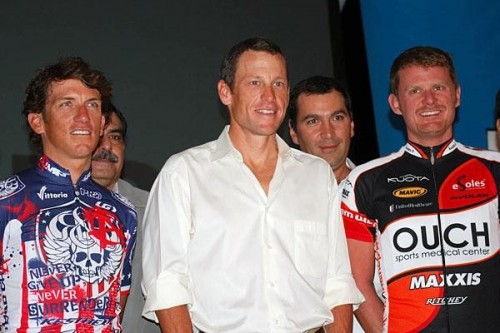 Guess we’re going to have to wait until Lance’s birthday, September 18th, to get Tyler’s full disclosure on this saga. These 3 have had a pretty strange relationship.