I’m still in Aspen. The Pro Challenge finishes here in a few hours. This post is late because I just met up with Trudi as she came straight here to start the hotel work. Bromont was obviously very happy to see her.

Yesterday, Sue and I rode up Independence Pass. The day before got rainy, so we put if off for a day. Yesterday, the weather was perfect. I’ve pretty much had a headache every since I got to altitude. That isn’t usual for me.

The ride up the pass was great. And exactly the right speed. I can’t train when I get to altitude. I just ride, usually pretty slowly. Riding up yesterday was pretty slow. It took just about 1:50 to do the 19 + miles. It is one of my favorite climbs in Colorado. Super scenic. I have to admit, having super easy gears made the climb seem easy. It really isn’t that hard of a climb, even though it goes up over 4000 feet.

I’m pretty sure I haven’t ridden up the climb since the Coor’s Classic in 1988. The stage was from Aspen to Copper Mt. What is significant about this race was it was the first time I had witnessed modern day team riding in a bike race.

Davis Phinney won the Coor’s Classic in 1988. (And Inga Thompson, celebrity guest commenter on the previous post, won the woman’s race.) Davis winning overall was pretty unbelievable feat since he wasn’t a climber. But, the 7-11 team came up with the tactic of staying together and climbing together. When Alexi and the climbers went up the road, Andy Hampsten, who was riding for 7-11, went with them and sat on. That demoralized the break and created havoc in Alexi’s mind. Then, Roy Knickman, Ron Kiefel, Alex Steida, Davis and Co. climbed Independence Pass at their slowest rider’s pace. They stayed together and rode a hard TTT to catch the break and keep Davis in the general classification battle. This wasn’t the era of 8 or 9 riders in a race, so they all had to work crazy hard. But, the tactic worked and the rest is history. I can’t swear that these guys came up with the this tactic of controlling the race as a team, but I’d never seen it before either in Europe or the US, so I’m giving them the credit. I hate it, but it works.

The town of Aspen is hopping. The masses are converging. I can’t believe how dog friendly this town is. It is by far the most dog friendly town I’ve ever been to. Dog are everywhere. On leashes, off leases, it is incredible. Bromont isn’t normally into other dog, not that he doesn’t like them, he is usually sort of disinterested. But, here he seems to be more game to play, which is nice.

Anyway, I have to go for a ride before the woman’s race and Pro’s finish. I’m glad I only have to stand there and watch them go by once. If it was more, it would drive me crazy I think. 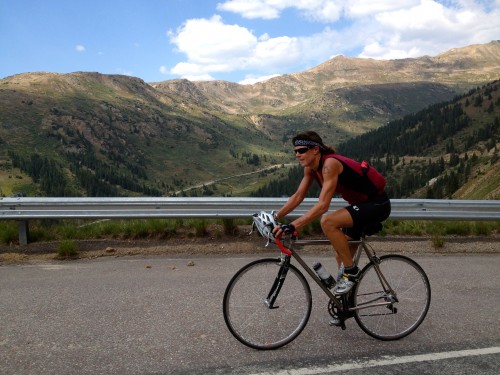 Sue climbing near the top of the climb. 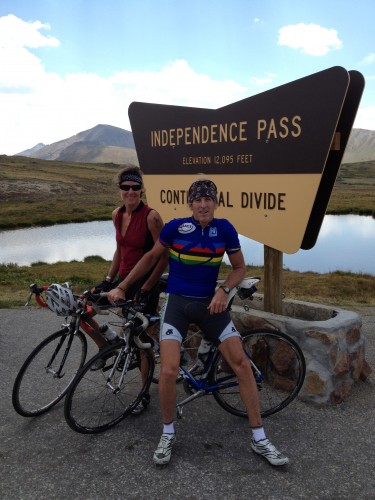 At the summit. There are a couple dozen porta-potties up there, so I assume the crowds are going to be unreal. 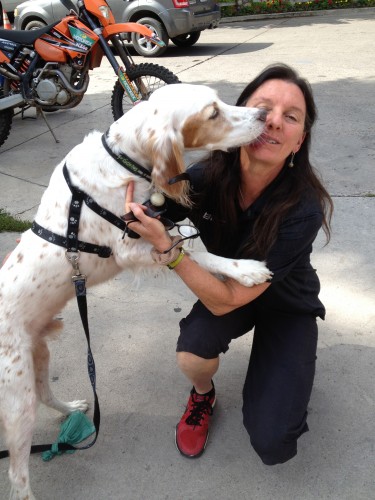 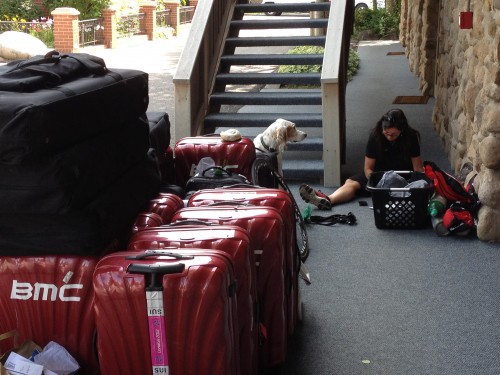 Trudi trying to figure out where all the luggage goes while Bromont is thinking,
“What the f#%& ?” 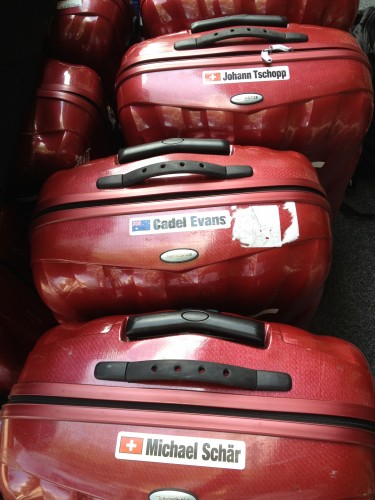 Since all the luggage looks the same, they have name tags. I like the nationality addition.