I’ve let this Jonathan Vaughter’s “issue” mull around in my brain from the last few days and I have a few more observations and beliefs. So, I guess I’m going to post again on the same ol’, same ol’.

First and foremost I can’t believe how much time Jonathan has spent on the internet the past week. I have no personal knowledge if this is normal for him, but he seems to be posting anywhere and everywhere that his “mission statement” has been critiqued. It seems unfathomable that he has enough hours in the day to be doing this.

I have to admit, that I wasn’t following Jonathan’s stance too closely before this all went on. Now I’m more up to speed on what Jonathan’s thought process is. I have to give him credit because he says much of what I would like to hear pertaining to doping in cycling. When he is on Cyclingnews.com forums or where ever, his spin on the subject mirrors much of what I believe.

My main problem with Jonathan at this point is that his actions, as the czar of the Garmin Pro Tour “Clean Team”, don’t seem to mirror his words on the subject of doping in the sport. This is a big discrepancy. Huge.

Jonathan responded to a comment I left at an article titled, A rebuttal to Steve Tilford’s hatchet job on Vaughters, at the atwistedpspoke.com that – Let me clue you in: I choose guys because they are talented. If you want to start digging into who doped and who didn’t in the last decade, you’ll never figure it out. Some guys will get away with it and no one will know. Some won’t. So, talent+desire to race clean now+honesty to me about their past=bingo.

This statement bothered me the most,even though he came close to “stepping over the make it personal line” at the end. Here’s the deal with the line. For one, the talented guys statement-

I have no idea how Jonathan determines who is talented and not talented once they have be suspended for doping. I very much doubt there are any scientific studies out there on the long term impact of using PED’s and then riding clean. In my book, once a rider has been suspended for using drugs in the sport, all his results and any impressions I had on his ability is completely erased. I have to make an arguable assumption that if an athlete uses drugs to train and race for an extended period, then there are going to be some long term affects to the positive. When Jonathan can produce one long term studies on using these crazy good drugs that cyclists are using, then I’ll let him decide who is “naturally” talented and who isn’t. Until then I call bullshit.

According to Jonathan in the NYT piece, Almost every athlete I’ve met who has doped will say they did it only because they wanted a level playing field. That says something: everyone wants a fair chance, not more. Jonathan’s stance on rehiring previously suspended doping riders seems to be let by gones be by gones. I could understand this mentality if it was 2002. But, even according to Jonathan himself, riders can win Grand Tours and the Olympics Games competing clean. He says he believes that Ryder won the Giro clean and the Olympic Games can be won clean, then his current actions and parameters for hiring riders previously suspended for drug use seemed to be flawed, and contradictory to his words. When he is currently hiring riders that are coming off doping suspensions for the Garmin Team he directs, he is really hiring riders that are just cheating. The “clean team” is an sanctuary for these guys.

And finally, it’s not such a big deal, but I wish he would quit saying the the testing and the biological passport is working. We all realize that it isn’t even close to working. I’m not saying to abandon the programs, but let’s not portray the programs as close to successful. The question I get the most often from the general public is “Don’t they get tested?”. The uneducated fans think the drug testing is good, which has been proven incorrect time and time again.

Janathan said in the comment at atwistedspoike, “If you want to start drawing lines, we can all play that game. Serves no one. Either people have the resolve to clean it up going forward or not. End of.” I want Jonathan to start drawing lines. Forget the game and his recipe for “bingo”. I want the line to be that there is a Zero tolerance for drug usage in the sport of cycling. I believe Jonathan has made a convincing argument that the sport is much cleaner now than when he was facing the challenges of doping. If he believes that then his actions need to start mimicking his words. Then it will be End of. 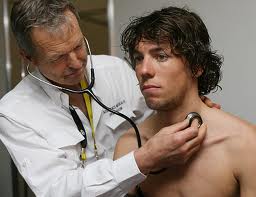 Here is a photo of Thomas Dekker, who I presume is in the middle of a long term, extensive study, determining without a doubt, how “talented” he was as an athlete before he got on a long term PED program.