A couple people emailed me and said that I was kind of hard on Jonathan Vaughters yesterday. One asked if I didn’t like the guy.

Exactly the opposite. I think Jonathan is a super nice guy. He always has been. Just because I think that he has ulterior motives for many of his actions doesn’t mean I wouldn’t like him.

That is one of the problems with the sport and drugs. Nice guys take drugs too. Most of the people I’ve met through the sport of cycling are generally nice people. And nice guys don’t always do the right thing. History judges what people do at certain points of their lives.

I didn’t like the op-ed piece that Jonathan wrote. I thought it was too full of misinformation.

I’m a numbers guy. I have to disagree with his 2% thing. He’s full of shit. I watched Floyd Landis go from an okay MTB semi pro to the winner of the Tour de France. That isn’t a 2% increase in anything. I’ve personally witnessed it dozens of times. He is doing the clean athletes a disservice by spewing such a ridiculously low number.

And more. Antidoping enforcement is 1000 times better now than 10 years ago. I don’t necessarily disagree with this, but he makes the case that the sport is clean enough to win races clean. Over and over. I don’t agree with that. I think that it is very easy to avoid getting caught taking drugs in sports. The biological passport is a joke. And the tests catch stupid or lazy athletes. Maybe he should of used the number 1 million X’s?

I hate that he made excuses for himself and every other doper with the statement, “Almost every athlete I’ve met who has doped will say they did it only because they wanted a level playing field.” That is complete bullshit. You think Riccardo Ricco wanted a level playing field? How about Vino? And the 100’s of others that were caught. This doesn’t even address the other 10x as many riders that never got caught.

Jonathan might be one of the good guys now. One of the good guys trying to get the sport to a better place. I don’t know for sure. His tactics and methodology isn’t so obvious to me right now. And his timing and actions tend to detract from his stated mission. I’m not sure if it is because of the USADA thing coming to a head or because Tyler is publishing his tell-all book on September 18th, Lance’s birthday, or what. But, there is some urgency for him to be addressing this with the general public now. Like I said yesterday, if he wants credibility, he needs to quit talking in such a vague and misleading ways. We all aren’t stupid.

Much of the reason Jonathan got to this point in his life and career is because he made the choice to dope in cycling. Tell me he would be running the Garmin team if he had just said NO and quit before his European results. I think not. So, he has this platform and big voice because, according to him, he “made the wrong decision”.

So now he gets a 2nd chance. For me, he’s not doing so well with it so far, in my opinion. But, hopefully it is early in the game and he is going to use his good morals to make up for his “wrong decision” he made in his past. After all, he is a good guy. 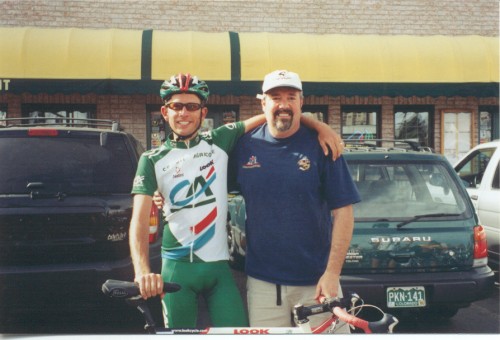 Jonathan, back when he was happy with no pressure to dope.