First, all the Badminton players being disqualified for not trying in matches. Then a few other athletes were removed from the games for tweeting questionable tweets, two more sent home early for posing with guns for photos, and finally a runner for jogging during his qualification heat in the 800 meters.

All these things, in my book were complete bullshit. First the badminton. Who sets up a tournament where you are rewarded for losing a match? And if that is the way the brackets are set, it is better to lose, then lose. Does the badminton officials not realize that these teams are trying to win the Olympic Games and not each and every point, game and/or match. Where does it stop? Maybe we should disqualify Serena Williams because she decided not to try to win a point in one of her games. Or maybe disqualify Vino from the road race when he coasted down a the hill and did not “try” as hard as he could at all times. There are millions of reasons athlete try during different times during their competitions. It’s not up to an official to, subjectively, decide when it is important to try and when it isn’t.

The same goes with the 800 meter runner. He is considered a medal contender for the 1500 meters and must have decided that the 800 wasn’t going to be good for him. That is the way it works. Maybe he should have just not started to begin with, but I have no idea what situation he was in with his country, federation or sponsors, etc., so I don’t really know about that. But, if the guy is trying to win a medal in the Olympics and thinks that running hard in a 800 meter qualifying race will be detrimental to that purpose, then by all means, he should jog. (They did reinstate the guy to run in the 1500 meters.)

The tweet is a little different. The tweet was racist. But, that really doesn’t have anything to do with the Olympic Games. Is every athlete that competes in the games going to eventually have to go through a background check to prove they are politically correct in every aspect of their lives? If she would have done it a year ago, it would have no bearing on her participation. I don’t approve of the tweet one bit, but it has nothing to do with the competition.

And finally, the Australian guys who posed in LA with guns is another silly thing. Guns are a serious deal in Australia. As they should be here. They let the boys swim, but they had to leave London right after their competition and don’t get to use social media for a month. What does that have to do with sports? Nothing. They weren’t doing anything illegal in the US. I doubt it was illegal in Australia, so what’s the big deal. I hate guns. I think our gun laws are archaic. Not even close to addressing the situation we have with modern firearms. But, this has nothing to do with the Olympics. It’s just a couple guys posting some stuff on the internet for fun.

If we’re kicking guys out of the Olympics, how about the British Sprint Team who “fell” at the start to get a restart when they thought they started badly. I’m not a track rider, so I don’t know the accepted policy for this, but from my perspective, it is bullshit once again. The guy didn crash. Crashing involved falling not on purpose. Falling on purpose is nothing close to crashing. I don’t even know the wording of the rule, but it is cheating in my book. There must be something I don’t get because the coach of the French team seemed to be okay with fake crash and said the British guys were best.

I say, so what. They got a bad start and should have to should how great there are when they start like shit. Then we really see who is best when they blow the gun off. And blow the gun off only once, not twice. It isn’t like a false start in swimming. It is a rule for restarting after a mishap, not an intentional mishap.

Anyway, all these things seems crazy to me. Crazy that they are even in the media, let alone decide who can compete or not compete in the Olympic Games. This isn’t a popularity contest, it is a sporting event. 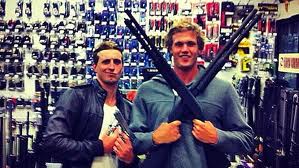 Boys with guns, with internet access, have to go home in Australia. 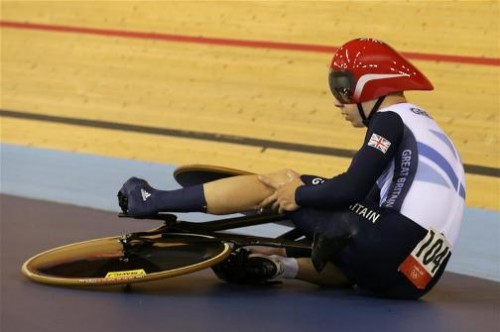 15 thoughts on “Disqualified from the Olympics”