I am World Champion in another aspect of cycling. I’m not actually sure what it is exactly, but back in the 90’s, there was a new idea for the sport called the NCL, the National Cycling League. It was somehow structured after the NFL. It was so closely tied to the NFL that Franco Harris, Hall of Famer from the Pittsburg Steelers, was the owner of the Pittsburg NCL team. I’m not sure how many years they did the series, maybe 4???

The format was two criterium point races per day, in different cities all over the country. I was racing MTB bikes at the time and only made it to a couple of the events. But, I did go down to Miami for the “World Championships” in 1992.

I rode for a team called the Houston Outlaws. I don’t really remember everyone on the team. I know that I was riding with my ex Wheaties/Schwinn team mate, Alan McCormick and also Andy Paulin, ex Levi’s team mate. Also, I remember Joe Parkin, ex Bikes by Kyle, Philadelphia Flyers team mate.

There were lots of guys that I raced with normally in “real” races. We were all pretty much doing it for some extra money. I think we all got paid per event.

Anyway, the Houston Team had gotten 2nd the year before (I wasn’t riding with them). The race my year was in Miami. I think were were racing against teams from Portland, Pittsburg and Miami. I don’t remember a bunch of specifics from the two races. We did maybe a 30 minute points race, then 1/2 time and then another 30 minute points race. I know during the half time, Andy Paulin had an episode with his heart that was the first sign of a heart problem that he has had to deal with ever since. I was riding next to him when he said he felt weird and was bonking. He slowed, fell over and passed out. He didn’t race the 2nd race.

I know we barely won the whole thing. Alan scored a ton of points. I just marked breaks and picked up the scrap points. Our team was owned by some rich guy in Austin, I believe. Our owners were thrilled after the race. We celebrated and went out for a super nice dinner. I think you can tell by my complete recollection of the whole thing how important it was to me.

They took our rings sizes and a few weeks later we received our rings. They were huge, made at the same place they make the rings for the NFL, NBA and MLB. I compared mine to Franco’s super bowl ring and they were the same size. The reason the rings are so big is because the hands of all those guys are huge, so the rings looks silly small.

I saved all my stuff from the defunct league. I have a contract that is something like 80 pages long, but missing 15 or more pages in the middle. It was pretty much a NLF contract. I have a couple skinsuits that say Houston Outlaws and my number, 78. Maybe 100 years from now it will be worth something because cycling is so popular and this was the first attempt to bring “real professional” cycling to the US.

I did take my ring with me once up to Cable, Wisconsin, in the winter when I was skiing with Greg LeMond. I pulled it out one night and told Greg that with all the silly racing over in Europe, he never had a chance to get one of these (rings). He tossed it across the room. Enough said about that. 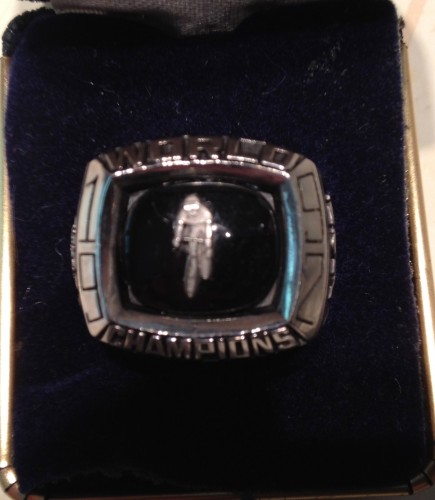 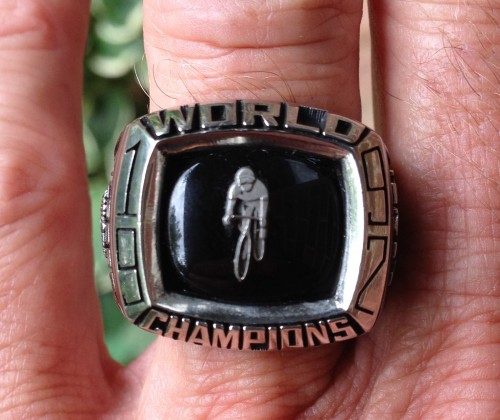 The rings are huge. 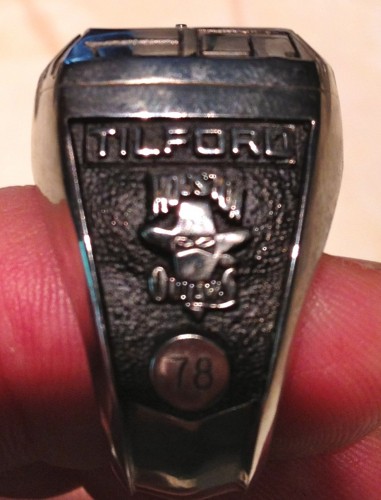 Each ring is custom with the team’s name, the rider’s name and number. 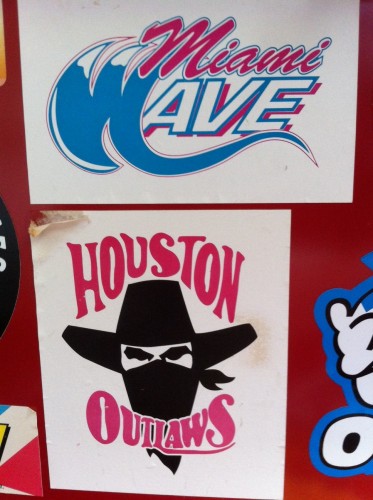 Logos from the Miami Wave and Houston Outlaws courtesy of James Brookshire’s toolbox.