I raced in Springfield Missouri a couple times yesterday. It’s only 250 miles from Topeka, so that is kind of a stone’s throw away in Midwest standards.

The deal with the day was it was hot. Super hot. Not super, super hot, just super hot and muggy. It actually rained for 5 minutes a couple of times right before the Pro 1/2 race at 2:40, just adding to the misery.

Bill and I both raced the Master’s Race at 10:30. Neither of us have raced since The Tour of Lawrence, so we thought we were pretty stale. It turned out to be a very good idea for both of us, because we were both really stale. Bill won the race, off the front with one other guy and I won the field sprint, but we were in different categories, so we both got 1st.

I was not good the whole 45 minutes. Not even close. And it was barely 100 degrees. We rode back to our hotel and sat there for an hour, trying to cool down before the Pro 1/2 race. Neither of us were very enthused about racing again. We both felt bad. Mainly my stomach was bad. That happens sometimes in extreme heat.

The Pro 1/2 race was a lot hotter. It was 104 degrees and like I said above, pretty stifling muggy. I have been riding a bunch in the heat, but not in the humidity. It is a lot different. One thing, the officials allowed hand ups, so we could get as much water as we wanted.

Brad Huff, a Springfield local, flew back from Michigan after finishing 2nd in the Professional Criterium Nationals the day before. I think it is super cool that Brad makes a big effort to return to his hometown, to race and support local cycling in the area. He even sponsored the race with a bunch of primes. You don’t see that much nowadays in cycling.

Anyway, Brad is obviously hard to beat in a criterium. Any criterium. He is ranked 1st in the USA Cycling Criterium Rankings and has won the Professional Criterium Nationals before, so he is nearly impossible to beat locally in a crit.

I felt pretty shitty the first few laps as everyone attacked and attacked and got overheated. Brad rolled off the front with a couple guys and the field kind of split into a lot of pieces chasing. I missed it all and had to bridge back up to the front 20 guys right when it came back together. I rolled off the front with a couple guys and then Adam Mills, my friend and ex-team mate came up and that was it, sort of. The 4 of us distanced ourselves from the field pretty quickly. But, I knew that Brad would be there soon. He didn’t come as soon as I had anticipated. He waited until we were over 20 seconds away before he bridged up. I’d told Brad before the race that I didn’t have any intention of winning and if he needed any assistance, just ask. He said we should just race, which I had planned to do anyway.

So, the 5 of us went around and lapped the field. Adam put in a pretty good dig, very unexpected, right before we were lapping the field. But, we all got into the field. Then it turned into a attacked fest, kind of. Guys were trying to get away and the 5 of us were watching each other. Brad got away alone a few times. He attacks at sort of strange times and very often, so it is pretty hard trying to read whether he is just messing around or serious. He’s always done that, so I should be used to it by now. I chased him a few times. I really can’t explain why, other than I was feeling a ton better than the earlier race and felt like riding harder.

Towards the end of the race, Adam, Brad and I separated ourselves from the other two guys and ended up in a group with Bill and Austin Vinton, Adam’s Mercy team mate, also from Springfield. Austin eventually rode away and got the next place, 6th, and the rest of us were left to sprint it out. There was a time when I could sprint with Brad, but not recently. Brad lead it out from 1/2 a lap to go and led into the 2nd to last corner. It was 75 meters before the final corner, which was 150 meters from the finish line, uphill and tailwind.

I jumped Brad for the last corner. It wasn’t going to really matter where I started, he is a ton faster. I came out of the corner in the led, but Brad went by me easily. Adam was just a little bit behind in 3rd. Bill ended up finishing 10th, which was the last paying place.

I can’t really complain how I felt the 2nd race. I really needed to race. I need to race much more in general, both road and MTB. I didn’t really have the right mindset to really try to win the race. It would of been a supreme effort for that to happen and I don’t have that in me right now. I don’t understand I can feel so bad and then a couple hours later, when the conditions are worse, feel better. I think one of the reasons the Masters race was hard was because the wind was exactly opposite than during the Pro 1/2 race. The course roe much easier with the strong wind at your back up the start/finish hill. There is no way to warm up as hard as the Master’s race. Usually in hot conditions, I hardly warm up at all. Hopefully, this stupid weather is over soon and it will be back to normal, which is more reasonable 90 degrees.

Adam rode a great race. He attacked pretty hard quite a few times and was riding really strong. He relishes riding in the heat. I’m not sure why, but it usually seems to work out well for him. I ended up with close to 70 miles for the day, all hot miles, so that is something.

I’ve raced this race a few times. The first time maybe 20 years ago. I won that year. I don’t really like the course much. It doesn’t have a hill, for one. It is a rectangle, but only two of the corners are 90 degree, the other two are sweepers. I hate corners like that. It makes for dangerous racing. But, I think there was only one crash in the Pro 1/2 race, so it wasn’t too bad. The promoters did a great job though. It takes so much effort into putting an event like this on, so hats off to them, especially considering the conditions.

It is funny how racing a local race is usually harder than a bigger event. I think it is because you’re in the wind much longer and there are a lot more efforts, without the aid of drafting. The changes of speed are much greater too, which makes the races harder.

We got back to Lawrence by 8, in time to eat dinner at FreeState and have a couple beers. Trudi is off to California/Utah now, so I had to drive her to Kansas City, which is an hour, to drop her off for a 7 am flight, so I got 4 1/2 hours sleep. She has to work for BMC the next month and then a couple weeks in September for the Canadian World Cups. The cats are going to miss her like crazy. 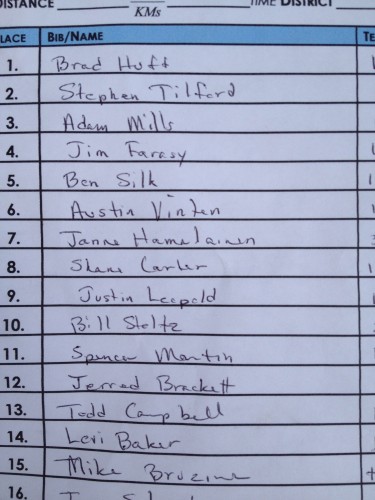 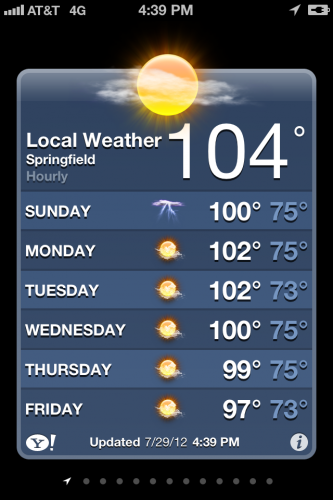 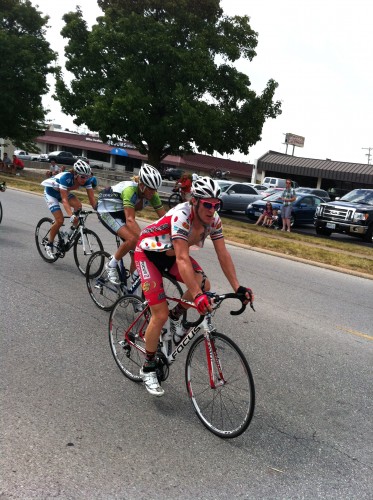 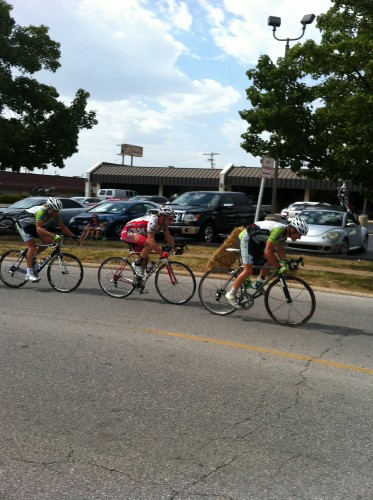 Bill pulled us around the last few laps. 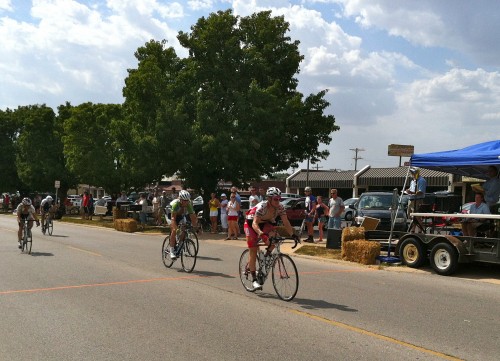 Brad beat me pretty handily in the end. I think he was just ready to be done with the day. 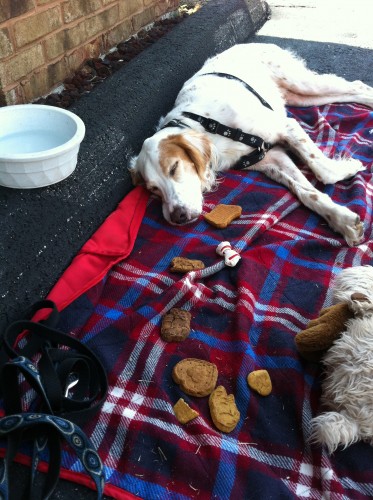 12 thoughts on “Man, This Sport is Very Hard- Springfield Criterium”