I know I’ve posted about how hot it is in Kansas right now, but it is about all that anyone thinks about here right now. I’m not obsessed about it, but I made a decision to try to figure out how to athletically deal with it. And I think I’ve sort of figured it out. At least for now.

I think the key is as much exposure as possible at sub-maximal effort levels. By sub-maximal I mean real easy training. I think that you get enough stress just from the heat exposure that you don’t need to add anything extra to that. Today was hardly 100 degrees when I rode at 6 pm. It makes a huge difference whether the sun is overhead or not. Most of my longer rides I’ve been leaving around noon or so to get the maximum exposure, but 3 days a week, we ride from my house after “normal” folks work, so I tend to wait until then. On the later rides, when it cools into the 90’s, I don’t mind doing a short maximal effort. We usually come in pretty hard for the last few miles, so it works out fine. Recently I’ve not had an issue with the tight diaphragm feeling I normally get when I’m gassed from heat.

Plus, I’ve been working out in the sun during the heat of the day moving concrete, on and off, for the past few days. Luckily Kansas is a pretty windy place always because if there was no wind movement, the job would be unbearable. As it is, I have only a couple hours, at most, before I have to rest and get something to drink.

Talk about drinking, I’m pretty sure you can’t drink enough liquid to stay hydrated when it’s 104 or more. Yesterday I drank around 5 large, thermal bottles of waters, drank a smoothie when I got home, plus a couple chunks of watermelon and I was 5 pounds lighter after 40 miles. And it wasn’t 100 much of the ride. On the hot days, I’m coming back 6-8 pounds light and I’m drinking at least 6 bottles in 60 miles. So, one bottle every half hour isn’t enough obviously. It’s a hassle to stop more (maybe I should take some bottles from the spectators?).

I’ve read you need somewhere are 20 hours in extreme heat to be completely acclimated. That makes sense, something like 2-3 hours for around 10 days seems about right to me. What I meant above about not being obsessed about trying to figure out the heat is just that I really want that arrow in my quiver when it occurs. I think to be a good, all around bike racer, you have to be able to over come all climate issues, whether it’s heat, cold, rain or snow. Extreme conditions are when the tough earn the label.

That is what blows me away about the Schlecks and others that have real weaknesses in their riding abilities. I can’t understand why they wouldn’t want to put in an effort to improve on those weaknesses. Especially if it means the difference between being a just a podium rider and the winner of Grand Tours. They seem to have the mentality that they’ll just try to climb better, work on their strengths, and hope that gets them by. That seems silly and lazy to me. It’s always easier working on something that you are good at than try to get better at something you suck at.

Anyway, I think I’m going to ride over to Lawrence at noon on my MTB bike. It’s a little longer and mostly on gravel, but there is some shade. I’m going to try to finish up the driveway before then, so I should be pretty good and tired by the time I’m riding. It’s just weight training, with heat I guess. Seems to drain you more though, not that I ever do any weight training.

Here are some photos from the last few days. 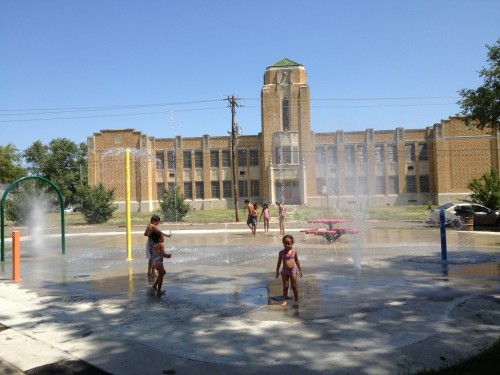 I was surprised that Topeka has a water park on the East side. 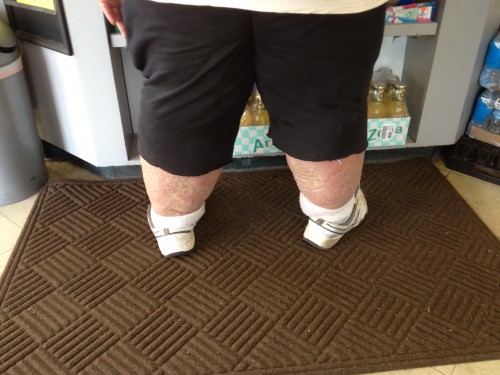 I saw this guy in Lawrence the other day. I have no idea how he is even moving around. I think he must be very ill. 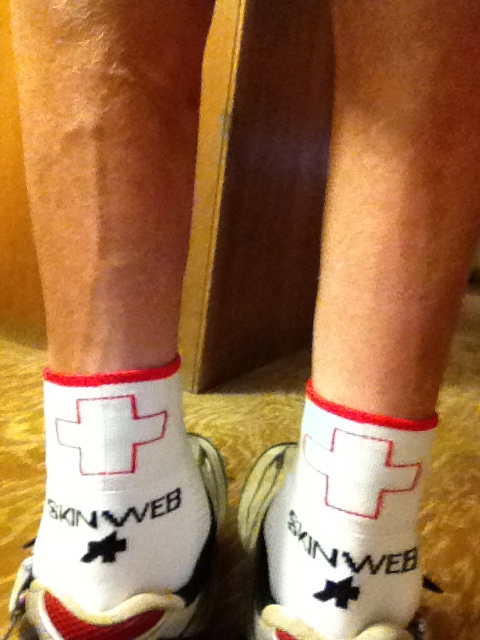 Self portrait of my skinny little calve to compare. 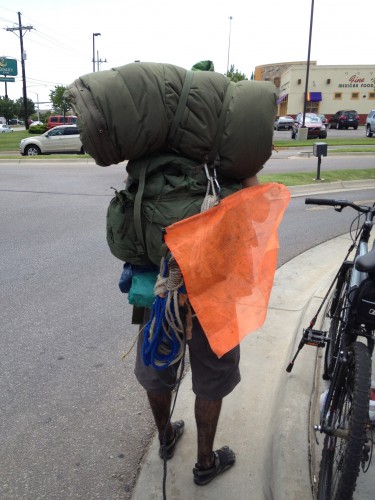 I saw this guy ride up to Starbucks the other day. Check his legs out. He is white and that is dirt. He is must be really, really hot. 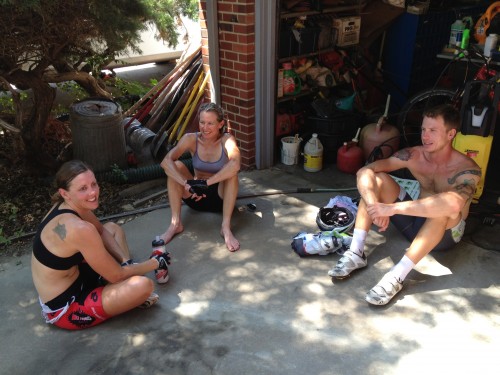 Sunday after the ride, Kelly, Catherine, and Kent, all look pretty hot. I’m not sure why we weren’t inside in the air conditioning. I guess after the ride, heat training or something. 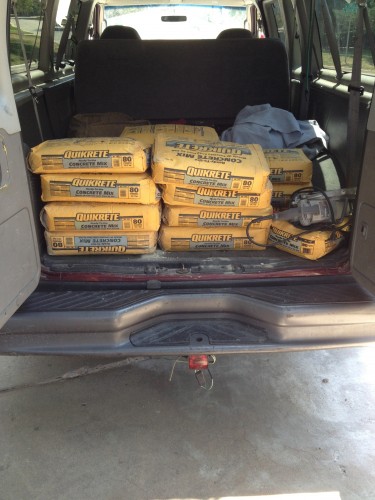 I kind of jacked up my back loading these bags of concrete into my van. I kind of hate the 80 lb bags, I much prefer the 60 lb ones. 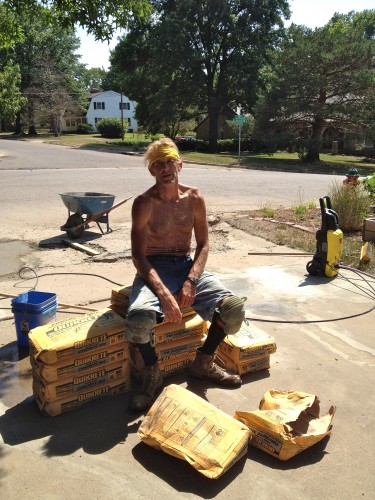 A little hot and beat. Kind of missed the shade of the morning. 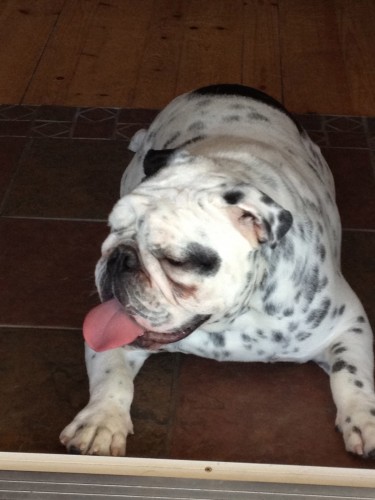 I can’t not include a photo of The Dude, Kent and Kelly’s dog. He is just one year old and is very much a cutie. 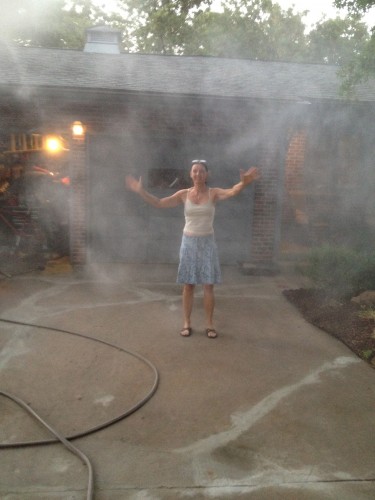 I was wetting the new concrete and Trudi wanted a little misting.

12 thoughts on “Riding in the Heat”