I historically haven’t been a big fan of either of the Schlecks. Fragile cyclists that don’t really know how to ride their bikes. It seemed to be the new generation of the sport. All climbing power, but really no ability. But, I saw a video interview with him before his positive drug test and the guy seemed pretty humble and real. That was surprising. I’m not sure why, because as far as I know, I’ve never met him, so how would I know who he is and what he’s like.

Anyway, he isn’t going to be racing for a while until he sorts this thing all out. I pretty much doubt this poison defense is going to work because if it does, then everyone is going to use it. Why not? The problem is that there is a chance that it is actually the case. I don’t know what chance that actually is, but there is a chance. But, that is the problem nowadays. When doping now became the norm, then when you are popped, you don’t get the benefit of doubt anymore.

Just think of Scott Moninger drug problem. Here is a copy of his wiki page concerning his suspension –

Do you think anyone would believe that now? Not many. That is the one of the biggest obstacles all some riders are going to face when they have the issue.

I received an email from a guy from Santa Barbara today asking me what I thought about this article at Velonews.com. The article quotes Chris Horner’s take on Frank Schleck’s deal. He says something like he took over 60 bottles during the Tour from spectators and that anyone of them could have be “spiked” with something. And that the riders have no control of what goes into their mouths.

I’ve always liked Chris. Still do. I think he races aggressively and is very savvy. But, sorry Chris, but that is total bullshit. He says something about the top 5 riders being supported, but back where he is, they have to take whatever they can get. Wow. I watched pretty much every stage and I can’t think of one time that I saw Chris take a bottle from a spectator. Take the 10 hardest stages, that would be around 6 bottle per stage. Each team has two team cars, plus multiple feeders on the course. And Chris finished in the top 15. So, according to his statement, he was abandoned and had to take the “risk” of taking a bottle that someone had put drugs in. I’m assuming that he is implying that Frank had the same problem.

And addressing his food statement. I’d bet $100 dollars that the RadioShack team has a cook with them at the Tour. A lot of the teams have full cooking trucks that travel with the race and some of the trucks even have dinning rooms in them where the riders eat. Every rider eats the same food. So if one of them would be positive, then the whole team would be positive.

It seems to me that Chris is sort of making a case for Contador with his meat statement in the article. I remember talking to Chris at a ‘cross race in San Diego last fall and he said that he didn’t think that Alberto would be suspended. He said something about a whole soccer team in Mexico that was positive for clembuterol and then something about the UCI telling the riders doing the Tour of China that they shouldn’t eat the meat for fear of testing positive.

Chris is usually spot on concerning a lot of aspects of the sport, but his last few calls on topics relating to doping have been crazy off the mark. I’m not even sure why he commenting. He said that that he didn’t believe Lance cheated last month. He’s sort of made plausible excuses for Alberto and now he’s come out in full support of Frank. I know that he has been a team mate of all this guys, but to go on record publicly on some of this stuff seems naive and ill advised.

Anyway, it’s not like the Pro Tour teams haven’t thought of all this before. And it’s not like they don’t have a budget and the means to support their riders during stage races. If I was making around 2.6 million Euros racing bikes, I surely wouldn’t be taking bottles from complete strangers if I had the slightest worry that they were poisoned.

Maybe with Johan not being at the Tour, the support staff was in complete disarray and the RadioShack Team had no bottles in their cars, so their riders had to rely on the spectators to get fed? Or maybe the higher ups in their organization, dislike Frank enough, because he was going to Astana, that the “bad” bottle he got was actually from the team car? So many plausible explanations to where the diuretic came from. Like I said from the start, I was just starting to like Frank, it’s too bad. 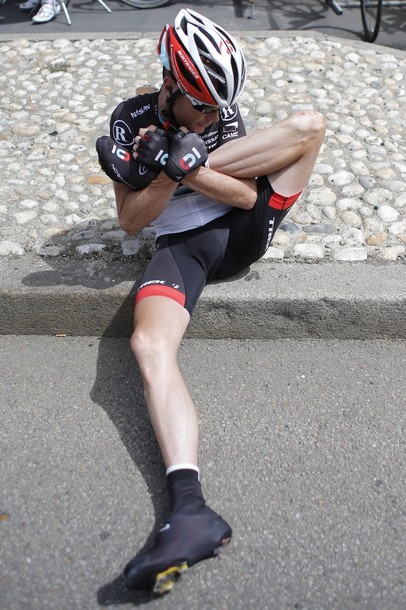 Chris doing a little pre race stretching on the curb.

6 thoughts on “It too bad, I was just starting to like Frank”