I couldn’t believe how embarrassing it was yesterday watching Christopher Froome ride up the final climb to the finish, taunting Bradley Wiggins the whole way. He might not of meant it to be actually be that way, but the fact was he did. I think he realizes that the whole race is on live TV. If he doesn’t, then he should. He rode more of the last 3km looking backwards, a couple bike lengths ahead of Wiggins, than looking forward. Jonathan Vaughter’s finally got something correct when he tweeted it was “humiliation”.

I kept hearing Froome talk about being okay as a domestic for Wiggins. His riding style on the climbs shows either he is not telling the truth or just that he sucks as a domestic. Either way, someone at Sky needs to sit Christopher down and give him some lessons. 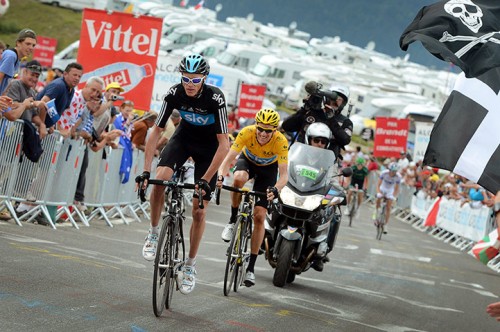 One of the few times Chris was looking forward yesterday.