I’ve been thinking some on Lance’s situation with USADA, after yesterday, when he had his attorneys file a 80 page document to request an injunction against USADA and the hearing by the arbitration panel. A Texas judge, threw out the lawsuit and told them to refile it again, sans PR BS, if they are seriously going this route.

I honestly don’t think that Lance is going to fight this thing if he has to go in front of a USADA arbitration board to plead his case and defend himself. I have to believe that USADA has the testimony of the, supposedly, 10 riders that are going to say that they witnessed Lance using PED’s, etc. I have to believe that his attorneys would not allow Lance to testify personally, so I can’t really see an up side for his participation in the whole process. I think he is planning on just going on a public relations blitz, claiming persecution, and rehashing his 500 “clean” drug tests.

But, I have to admit, I don’t really understand the whole process. I don’t know if each person that USADA has charged in this case, Lance, Johan, etc. can have their own arbitration hearings or if it is going to be lumped into one. You’d have to assume that most of these European guys aren’t going to show. (Breaking news- USADA just announced this afternoon that 3 of the Euro guys, including Dr. Michele Ferrari, have just received lifetime bans for their involvement.)

I didn’t come up with the whole non-defense thing out of thin air. I think Lance has known this thing was coming for a long time. Lance did an interview with Men’s Journal, in May, where he was quoted as saying – “In my mind, I’m truly done. You can interpret that however you want, but no matter what happens, I’m finished. I’m done fighting. I’ve moved on. If there are other things that arise, I’m not contesting anything. Case closed.”

The article goes on to address his reaction if they took a Tour victory away from him and he said he wouldn’t be “unhappy”. That just goes to show you he doesn’t mind lying to the press. I guess that by having his attorneys file an 80 page injunction shows that he must of changed his mind after he did that Men’s Journal article in May.

Another quote is – “I’d never waste another minute trying to convince somebody I’m innocent,” said the Texan. “I think everybody’s made up their minds. Nobody’s on the fence about me anymore. It’s kind of refreshing. If someone says, ‘I think you F*** cheated, I go, ‘ok, great. Can we talk about something else? Because I really don’t give a shit what you think. I’m not going to waste any more time having that argument.”

Anyway, I wonder what happens to George, Christian, Levi, Dave and Jonathan if Lance just decides not to contest the facts? I wonder if USADA will still impose a 6 month, off-season, wrist slapping, suspension? Maybe that is why none of them are talking, that none of it will become public? I don’t know. I guess we’ll all know soon enough. Probably during the Olympics when there is other stuff going on.

Here are a few of Lance’s tweets from last week after the USADA thing was filed. 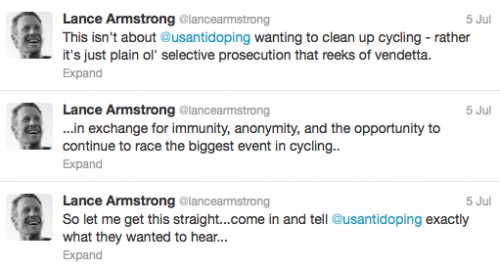 It seems Lance is implying that the guys testifying are being treated favorable by USADA by giving their statements.

Here he seems to be saying that they are all on the same side and USADA is the bad guy? 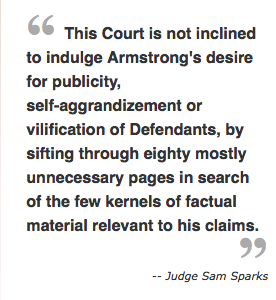 “  Dr. Ferrari, of Ferrara, Italy was a consulting doctor to numerous USPS and Discovery Channel Cycling Team riders during the period from at least 1999 through 2006. Since the 1990s to the present, Dr. Ferrari has been a consultant to numerous cyclists and several cycling teams. Dr. Ferrari was brought to several USPS training camps, including in the United States, where USPS team riders worked with him. Dr. Ferrari developed a distinctive mixture of testosterone and olive oil to be administered under the tongue to assist in recovery during races and training. This mixture was known among team members as the “oil.” Dr. Ferrari also advised riders on the use of the banned oxygen enhancer erythropoietin (“EPO”) with detailed instructions regarding clearance times, how the EPO drug test worked and how to avoid detection of the drug. Dr. Ferrari specifically advised riders to inject EPO intravenously in order to avoid the drug showing up in a urine drug test. Dr. Ferrari was present and assisted during instances of prohibited blood doping and EPO use by USPS team members. Dr. Ferrari developed detailed training schedules for riders which included coded symbols designating when EPO should be used and the amount of the drug to inject.”