I can’t see any reason to have a road bike up here in Cable right now, other than maybe for crotch recovery purposes. The MTB riding here, on single track is unparalleled. I think I’ve been needing a break from road riding, mainly because of the extremely hot temperatures, and MTB riding seems to have done that. Not that the temperatures have been hot the last two days, barely in 80’s.

We’ve ridden over 10 hours of MTB riding, mostly on singletrack, and it is all super. Today we rode over to Rock Lake and did the 12 mile loop. It was rated difficult, but wasn’t close to as technical as the white trail at Clinton, near Lawrence. It was fun though. My shoulder and hand are pretty much done for a little while, so a 3 day stint off-road is about all I can handle now.

We rode back through Cable, where the CXC team was having a roller ski sprint race in downtown. I’ve never really seen a roller ski race, so it was pretty interesting to watch. Both the elite men’s and women’s race were really close and came down to nearly a ski throw.

Anyway, we’re heading back to Topeka today, after doing the 10 o’clock Sunday ride a River Brook. They usually have a good crowd and I haven’t seen too many people here I know, so it is a good time to say hi. I’m not looking much forward to the 10 hour drive home, but it is unavoidable. I sort of thought of going over to Lake Geneva and doing a couple days of Superweek, but Catherine needs to get to work tomorrow and can’t take any days off. Maybe I’ll head back up there in a couple days and ride a few races. I feel alright riding, so racing would be good.

Here are some pictures of the last couple days- 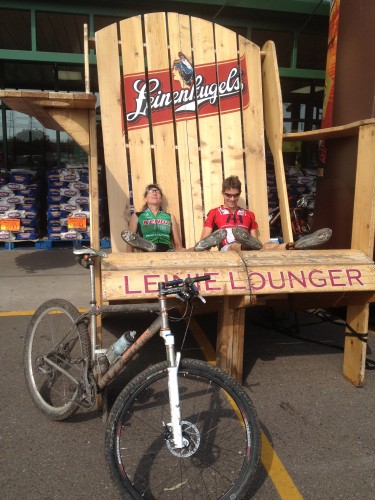 We were so wasted when we got to Hayward, Bill and Catherine got really small so they could share a chair. 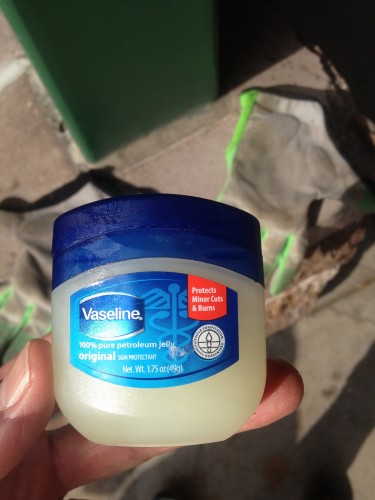 We had to go to the Marketplace and buy some Vaseline to make it back up to Dennis’. 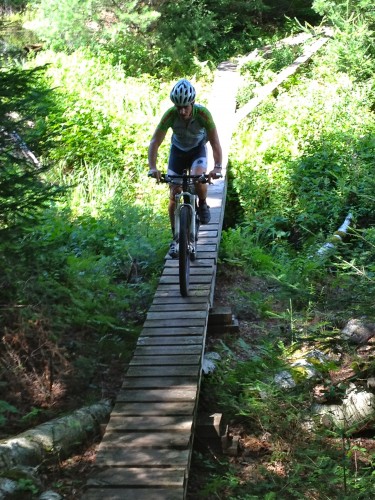 This was part of the Rock Lake trail. It was great. 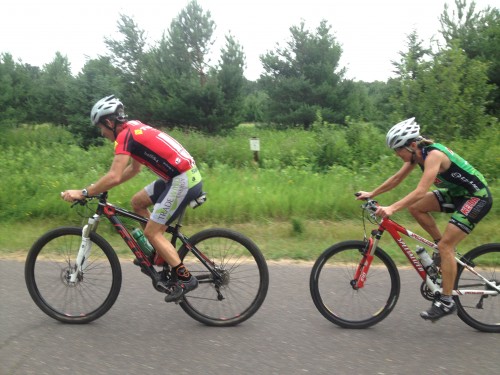 We were riding back into wicked headwind and I noticed that the draft was pretty horrible. Bill is on a 29’r here and you’ll notice that there is nearly a complete body length between him and Catherine. It is even worse with two 29’r s. 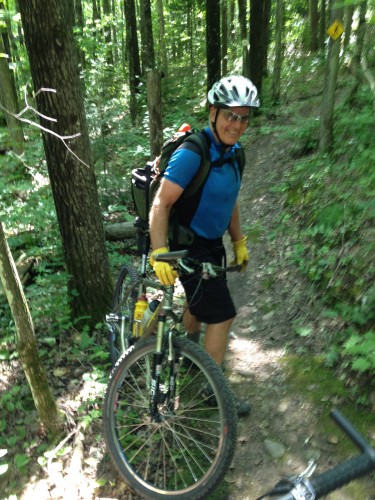 We met John Leighton, another one of those behind the scenes guys, who had spent over 10 hours the previous two days clearing the Rock Lake Trail from the blow down. He’s carrying a Stihl MS192 in his backpack. 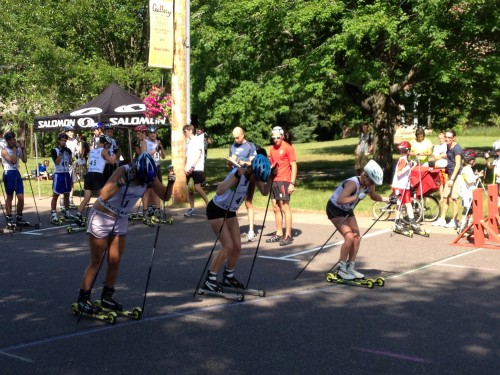 Some of the girls starting the roller ski race in downtown Cable. 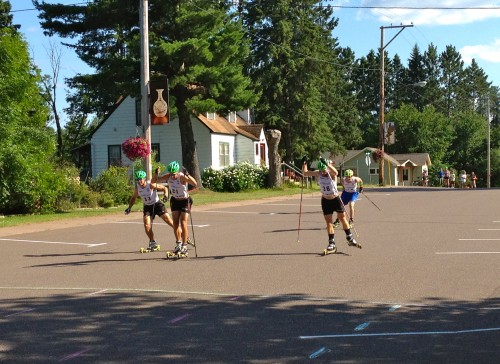 The elite men’s finish. The winner, Doug DeBold, CXC, wondered if he was professional now that he had won $150. I guess it was the first money he had won as a skier. It is crazy how much different the sport is than racing bikes. I’d won more than that after 2 or 3 races when I was 14. One sport where the pay is less. 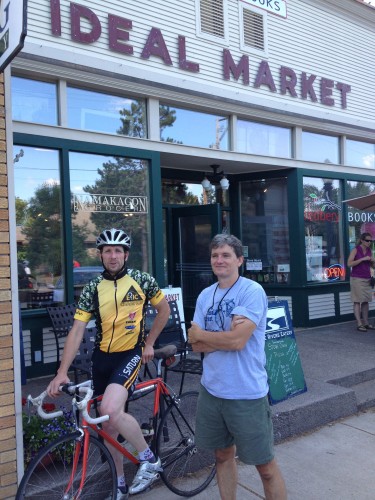 My friend, Pete Caron and Mick, owner of The Rivers Eatery, talking during the ski race. Pete went to KU with me one semester and then worked as a mechanic Levi’s Professional Team when I rode for them. He does construction up in the Cable area now. 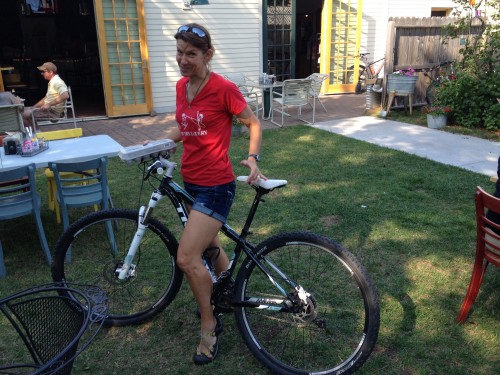 And here is Beth, Mick’s wife, on her new 29’r MTB bike. She said she got it so she could keep up with her daughters on singletrack. Good luck with that! 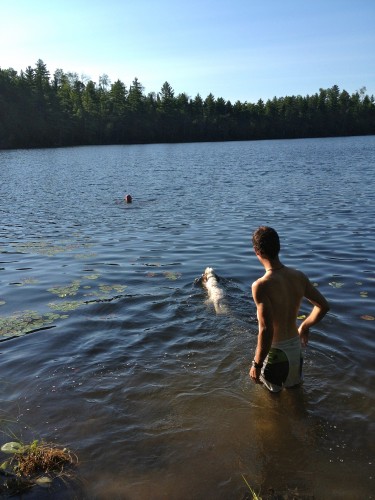 Bromont finally made it down to the lake when we were swimming. He is usually tearing around in the woods somewhere and goes swimming on his own. Here he’s swimming out to meet Trudi. 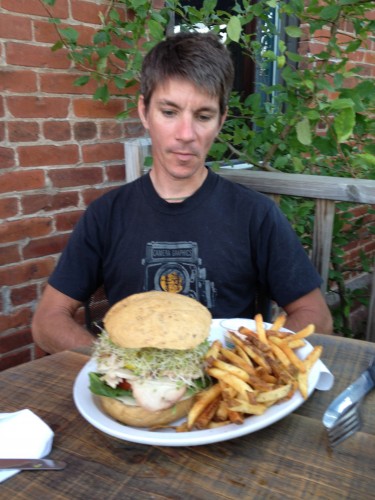 Bill was pretty hungry after riding off-road for 3 hours this afternoon, but this turkey sandwich at the Angry Minnow was too enormous even for his appetite. 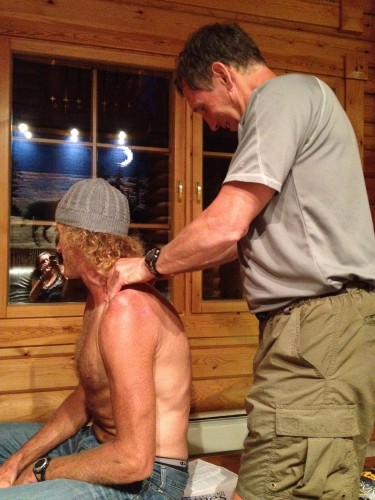 After dinner, we went up to the Seeley Highlands and saw Dr. Jim Mullen. He did a bunch of active release on my shoulder and neck and showed me a bunch of tricks for unbinding my bound up muscles from crashing. I felt a million times better after just a little bit. 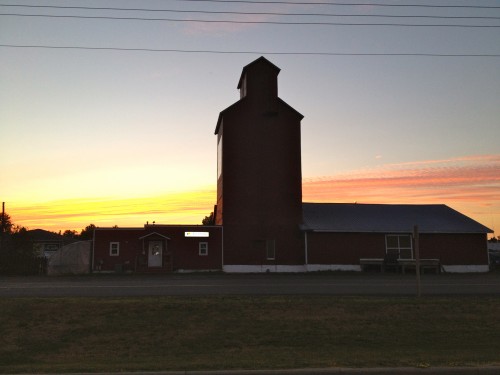 I took this picture in Hayward last night at around 9:40. It stays light up here really late.

5 thoughts on “No Reason for a Road Bike”