I’d hoped that these carpet guys would let me sleep, but no go there. So web post and Tour de France now.

The race yesterday was pretty interesting. It was a good mix of free-for-all bike racing and team racing, since there were only 75 riders, with no one team, other than Mercy, having more than 5 guys.

The course is nearly a figure 8 right in downtown Lawrence, with a slight rise going away from the finish line and a slight downhill to the finish. The wind was from the south pretty strong, so it was a headwind sprint.

The race was pretty quick right from the start. The field was very strong and motivated, which for me, makes for fun criterium racing. There were lots of little splits and it seemed like it was going to be a field sprint early. It was super hard riding off the front and pretty easy sitting in the field, which has field sprint written all over it.

But, with about 40 minutes to go, a group of around 8 guys rolled away. We, TradeWind Energy, had Brian Jensen in the move. On paper, it looked okay for him considering the mix. But pretty quickly, Joseph Schmaltz bridged up to the front, then a couple laps later, his team mate, Sean Sullivan flew across the gap in about 1/3 a lap. It was super impressive.

At that point, it wasn’t looking good. Brad Huff, Jelly Belly, missed the move and was a little stressed, then started doing his normal crazy attacks. Towards the end of the race, two things happened. Brad and a few guys got sort of organized and started taking time out of the break. At the same time, Stefan Roth and Brian somehow got off the front of the break, thus destroying the unity of the other riders. We caught the remainder of the break with maybe 7 laps to go. We went to the front and to slow the field. Luckily, a Mercy rider, I think Dylan Jones, bridged up to the front 2. That was good for us. The rest of the Mercy guys swarmed the front.

It was so close for the last 3 laps. The break was just hanging less than 10 seconds off the front. It was kind of strange trying to stay at the front of the field, hoping to slow it down, when setting up for a field sprint. With about 3 laps to go, there was a huge crash on the backstretch. I think Sean Sullivan fell there and that most likely changed the end of the race a lot.

With one to go, Brian and Co. had only 7 seconds. We never got going crazy hard, not much organization for any leadout. I was in pretty good position, somewhere in the top ten with 1/2 a lap to go. I was trying to get onto Brad Huff’s wheel, when I saw Bryan Duvall, Soundpony, do his normal long sprint. He got a huge gap and blew by the break with 4 corners to go. Josh Yeaton had one of his guys from Horizon doing a leadout, but they weren’t going fast enough. Brad shouted a couple times and then took matters into his own hands. He jumped the Horizon guys before the 2nd to last corner. I was on him, but when he went over the top of the Horizon guys, I was dislodged a bit. I was nearly back into the last corner, but on a much different angle than Brad. I lost Brad right out of the corner and knew it was going to be a ways to the finish, it being headwind. But, we had a big gap on the rest of the field. Brad caught Bryan right before the line, going way faster. I didn’t get by Bryan before the finish, but ended up 3rd.

If I would have played the finish just a little different, I would have finished 2nd. It is pretty unrealistic thinking there would have been any way I would have beaten Brad there. He is much faster than me and wasn’t in the wind anywhere nearly long enough to not have enough juice to get to the finish.

We, the TradeWind Team rode great. Mainly because Brian was so strong. He did the same thing last year at this race, never missing a move and riding off the front all day. It made it much easier for me just to hang and be rested for the end. The race was designated the State Criterium Championships, so being the first Kansas finisher, I was 1st.

I really like the Tour of Lawrence. I like the technical aspects of the courses and the composition of the the fields. Lots of small team with good aggressive riding. It is exactly what a big regional race is all about. Good venues, good prize money and enthusiastic spectators. Plus, it’s only a stone’s throw from my house.

I have no idea what the deal was this weekend compared to last. I felt 1000X better. I wasn’t going 100 %, but not 50 either. I was pretty good on Saturday and good again on Sunday. I didn’t do anything other than ride slow in the heat of the day all week. It always amazes me how these things happen. It seems like I’ll never figure it out. But, it makes the sport interesting. 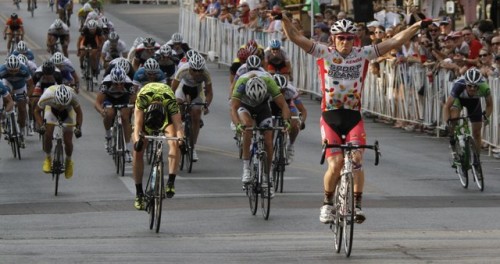 I didn’t get by Bryan at the line. Brad won convincingly. 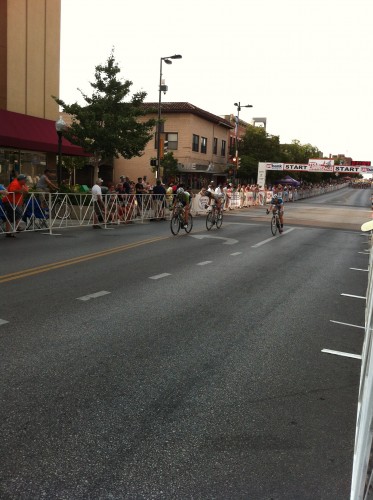 The strong guys, Brian and Stefan, made the race interesting to the very end. 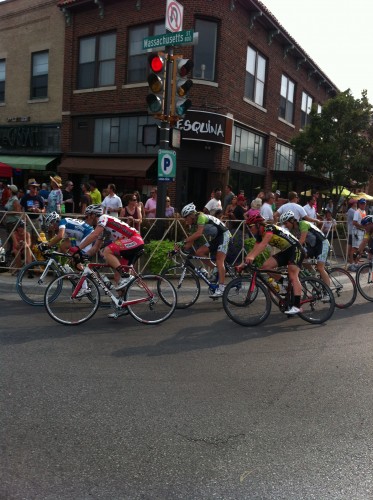 It is always super exciting racing on Mass. Street in downtown Lawrence. 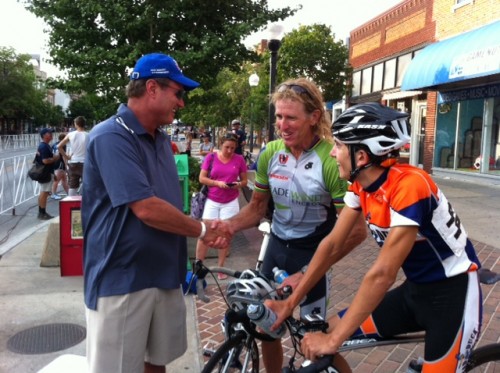 Running into the KU basketball coach, Bill Self was great. The other rider, a junior, Nick Torraca, from Grapevine Texas, was staying with him. Nick’s mom and Bill’s wife are good friends. Nick had an awesome weekend and is heading up to Canada to do the Tour de l’Abitibi in a couple weeks. I told him I rode that race in 1978. Crazy. 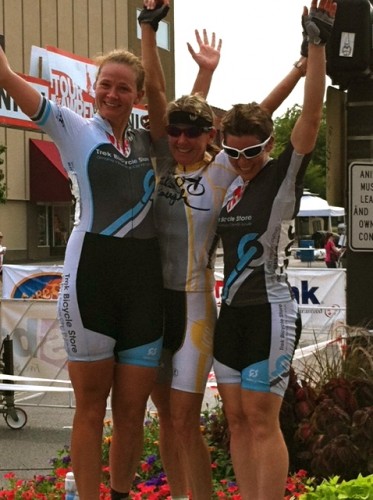 Catherine won the women’s race, sprinting from the front, to make up for the photo finish on Saturday. 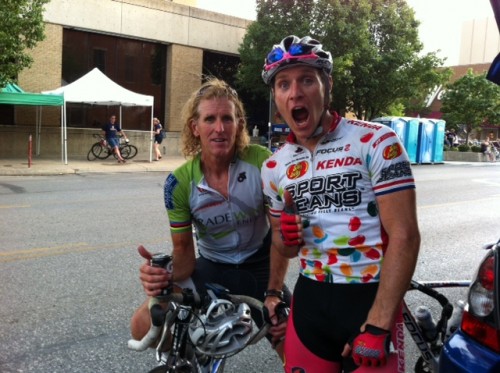 Brad and I after the race. Brad is from Springfield Missouri and it’s always great when he’s around to spice up the races. He makes them pretty interesting. He gave me an after race drink from Gatorade. It was pretty good, nearly better than chocolate milk. 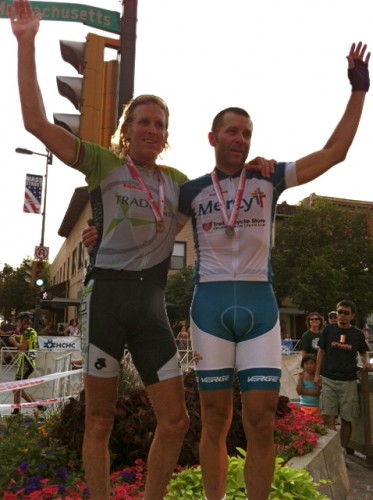 Shad Smith and I on the podium for the State Criterium title. Shad and I have been racing together for ages, on the same team and sometimes not. He is getting better every year in all aspects of cycling, which shows he’s a student of
the sport. 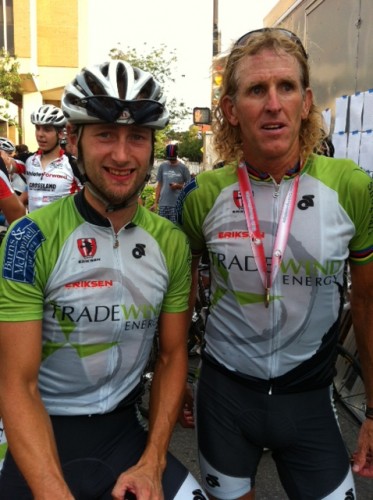 Brian and I after the race. Brian is, at this very moment, on a plane heading back to Denmark for a couple weeks. He has been doing this for the past couple years, visiting his mom and family when it’s hot in July. 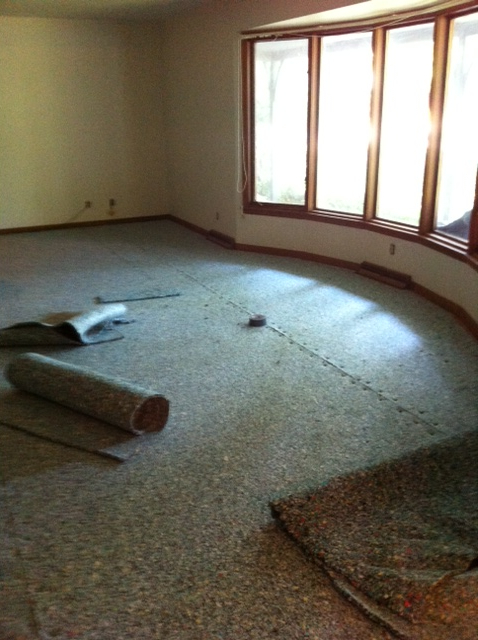 These carpet guys are pretty quick. 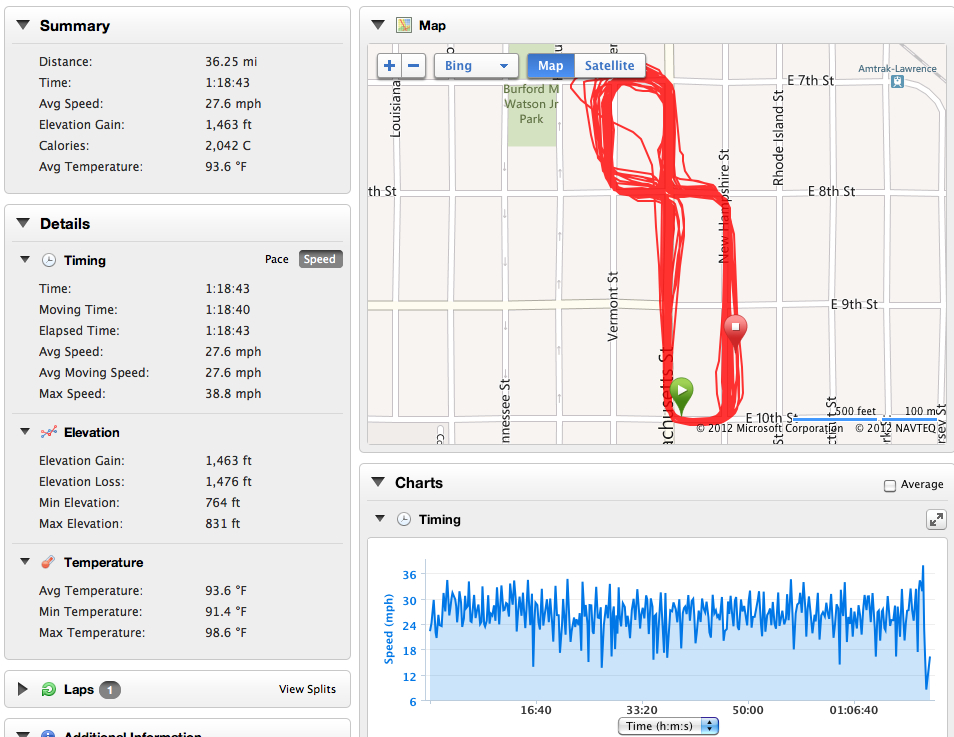 4 thoughts on “Tour of Lawrence Criterium”