I saw yesterday that CEO of Oracle, Larry ELlison, bought a Hawaiian Island for something around 600 million dollars. Well, he didn’t get the whole island, only 98% of it, or 141 square miles.

I’ve been noticing recently that there has been a ton of real estate going for near record amounts and also a lot of art work and rare antiques. I think that this is the way, nowadays, that the super rich protect their assets. It not a new thing exactly, because the rich have always been doing this somewhat. But, I think with all the strangeness going on in the financial world with commodities, stocks, currencies, etc., fluctuating enormous amounts on a daily/weekly/monthly basis, these super rich people need a way to keep their wealth stable. And they are using land and art.

There are so few people that can buy the most expensive homes/land and art that these people are really just trading it between themselves. As long as just a few more people, on a worldwide basis, join the group and participate in the conservation of wealth by purchasing too, then the assets will stay valuable. It really does make sense because our population is growing, wealth is growing, (maybe in a unhealthy way) but there are more and more super rich on the planet. More than ever before. And I don’t see it changing any time soon, the way the world economy is working at this time.

I think it is ingenious that these guys have their own little “club” and just trade all the greatest pieces of property between themselves. You take all the Middle East oil, National conflicts and such out of the equation. I guess most of these guys are somewhat smart and very lucky, so why would I expect anything less. 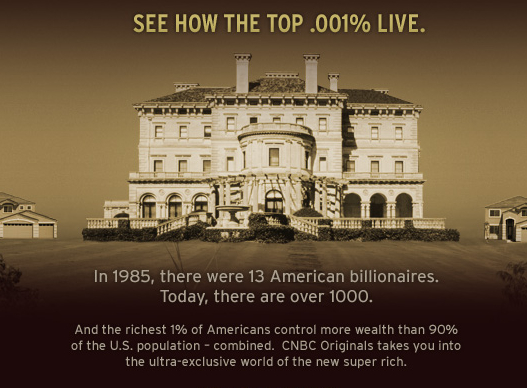 5 thoughts on “Land and Art, The New Currency for the Rich”