Last weekend in Tulsa I rode some wider tires, 24mm, than I usually ride. They were Challenge tires and I normally race on Vittoria tubulars. I knew I wasn’t in the right form to have tires be my limiting factor, so I thought it was a good time to test them out at race speed.

It might not have been the best time because I was dealing with so many other issues, I didn’t really get a chance to put them through a true test. I don’t have anything here to report other than they worked. I’m going to ride them next weekend in Tour of Kansas City and am going to take them out to California this weekend and do some descending on them I’ve historically done on clinchers.

That being said, I know a lot has been done recently about tire width and pressure. I saw this article that some guys had done some controlled rollouts of lots of different tires with different pressures. I’m not sure how scientific the procedure was, but the results were important.

They found that the “fastest” tires had half the resistance as the slowest. In real-life terms during a ten-kilometer time trial, the slowest tire (Continental Grand Prix 3000) would take 34 seconds longer than the fastest (a hand-made clincher with a cotton casing).

That isn’t a small thing. Half the rolling resistance is a lot. They found that the wider the tire, the lower rolling resistance. I think I could agree with that from personal experience. I’m not sure how many tubular tires they tested. Mounting and dismounting so many sewup tires wouldn’t be an easy thing. The tires would have to be glued onto the rims to make the test accurate.

Anyway, I have a lot of different pressures I ride under different conditions. There are lots of things to consider. Mainly, the tires you’re riding, the course and the day/weather. I usually race right around 100 psi in my tubular tires in a criterium. I might ride a little more in a road race if the road is in good condition. But, like I said, the tires you’re riding make a huge difference. Vittoria tubulars are way more supple than continentals, so the same pressure feels a lot difference.

When the roads are bumpy or chip and seal, I ride way less pressure. I train on less than 80 psi always and don’t pump up my tires until it is under 50. I know that sounds really low, but the ride is much better.

Anyway, after reading the Bicycle Quarterly post, I’m going to be paying way more attention to all of this. In cross and on the MTB, it is super crucial, but I’d sort of neglected the road. With all the new tire and wheel options, this might be complicated. 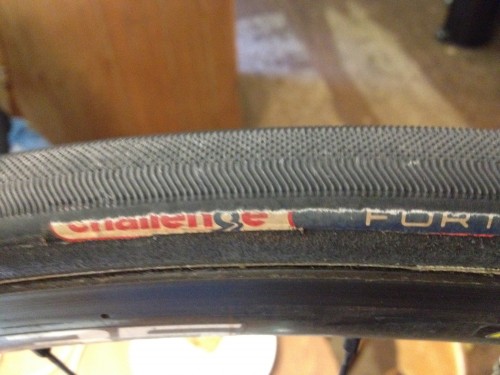 I can't believe how far I leaned over last weekend in Tulsa. This wear was the same on both the drive and non-driveside of the tires. 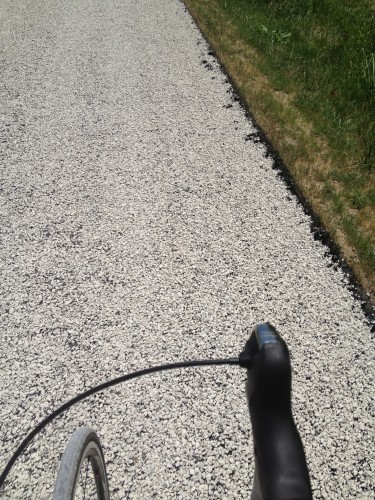 This was on about 2 miles of my ride yesterday from Topeka to Lawrence. The resistance of new chip and seal is incredible.