I saw an article at Cyclingnews that repeated some of the quotes that David Millar gave to the BBC.

“This is not the easy path for me. I had written off the Olympics,” he told BBC Sport.

“To decide to go to the Olympics is to now regurgitate everything and deal possibly with negative reactions and interviews about the past. Going back to living in the past is not something I want to do, I want to look forward.

“Digging up the past and having to justify myself and deal with the media, it would have been much easier for me simply to not go – then all I would probably have got was a positive reaction from martyring myself.

“But the biggest regret I could have is deciding to take the easy option, take my holiday, watch the road race on TV and see the British team and see what a stupid, selfish decision I had taken.”

All I can say about this is that I have to appreciate how David Millar is really sucking it up and being so unselfish to do something as gracious as this. This is, riding the Olympic games on your home soil, when you have a guy on your team that is supposedly the favorite to win the race. Man, completely unselfish.

I guess David only likes to “regurgitates” his ugly past up when he is doing a promo for his book on his ugly past and not when he is trying to justify his selection to an Olympic Team, after he used EPO and served a suspension.

Anyway, I guess David is going to have to practice his spiel since he was selected to the British Long Team for the Olympic Games. I’d think that all the other guys on this long team are diggin’ how unselfish David is being here. I do feel for him having go over all this dark stuff again and again. Lucky he has written a book about it that he actively promotes. Maybe he could just hand it out to anyone that asks him a uncomfortable question and tell them what page to look at for their answer. 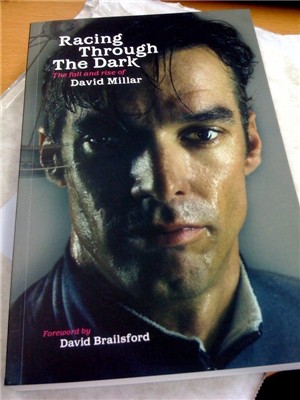 4 thoughts on “The Unselfish David Millar”