Yesterday sort of surprised me. Before the race if I would have had to give odds, I would have said I had about a 30% chance of finishing the race. So, I was wrong. Not such a bad thing here.

The race is hard though. And the conditions were tough, maybe Tulsa tough. The wind played a big factor in the final results. The wind was blowing around 20 mph and it was hot. It was hot, but there was a cloud cover some of the time. When the sun did come out, from behind the clouds, it felt like someone was pointing a big magnifying glass at you. It heated up so much it was pretty uncomfortable.

The course is pretty short. So, the efforts kept coming and coming. There are really two hills on the course. The Cry Baby Hill, which is the hard one, and then a dip and a small climb up to the 2nd to last corner. Plus, there is an off camber 110 degree corner a couple hundred meters from the finish, which is another place you have to put in an effort each lap.

I never was trying to do anything other than stay near the front of the field in case Brian got in position to race. He made a few efforts early, but it was super hard being close enough to the front each and every time something got away. Well, hard for us, not for Eric Marcotte, Elbowz Racing. Eric pretty much made, and drove, every break the whole day. It was amazing. He was in the final break that was off the front the last 30 minutes, got caught on the last lap and won the race still. I don’t know what that is all about, but it was great.

I stayed alright most of the day. I was taking ice cold bottles every few laps and there was a ton of water coming from all directions on the hill. There was only one crash the whole day that I saw. A Jamis/Sutter Home guy and Jelly Belly rider got tangled up right over the top of the hill. I heard there was some pushing by hands, but didn’t see it myself. Anyway, by the time I came over, I thought it was done, but the Jamis’ guys bike flew in front of me and pinched me up to the curb. I had to ride over his rear Shimano carbon wheel, which was a shame.

The last few laps got tricky. I thought I was good, but got kind of swarmed going down the hill into the bell lap. I was about 20 guys back on the start finish line and decided to make a move going into the hill to get back into some kind of good position. I took the inside of the corner going into the hill and passed about 15 guys, but it back fired pretty quickly when someone came over on me and I had to skid to nearly a stop. That was it. I didn’t have another 3 accelerations in me. I got back up to speed in about 25th place and was gassed. I passed a couple people going down the hill on the curb side and took the last corner wide and passed a couple more. I finished 21st, which was still in the money, which was nice.

I couldn’t have done much different. That was how it worked out. If I wouldn’t of had to brake, I might have finished 5-10, but those should of, could of, things are just wishful thinking. I’m not unhappy with how the day went. It was a pretty good workout, really an incredibly hard workout. The whole weekend was.

So, I guess the weekend was a success. I didn’t fall, I finished all three races in the money and don’t feel too destroyed. My shoulder is pretty achy. Actually, really achy. That sort of bothers me, but I guess time will tell. I’m trying to drink as much liquid each day as I can stomach for this blot clot thing. It is against my nature, but I’m doing pretty well at it none-the-less.

I’m so glad I didn’t have to sit the Tulsa Tough out this year. I like all three venues, I like the city and the crowds are getting bigger and more knowledgeable each year. Tim and his group are doing an outstanding job of getting the normal person out to watch a sport they know nothing about. It is great.

The drive back last night was fun. It was a nice way to wrap up the weekend. I like driving through the rural midwest, on 2 lane roads. We stopped in Bartlesville, OK and had awesome Italian at Luigi’s. It is going to be a mandatory stop every time I drive through there. A little strip mall Italian restaurant that made their own home cooked food, that was super cheap. A sampler plate with salad was $7. And the food was superb.

We stopped later in Independence Kansas and went to a small Dairy Queen. The sunset was awesome. It seemed that each and every small town we drove through had their local police out in force. I probably saw 10, or more, the 250 mile drive home. I nearly hit a deer around 11:30. I had to skid and the rear end of my van started to come around for some reason. The deer never looked up and just kept walking slowly across the road. If he would have been with friends, like normal, it would have been ugly. Then, later on, we got stopped at a railroad crossing and the train was crawling. We sat there, Keith and Catheine got out of their car and we talked for 10 minutes while the train slowly made its way. I loved it. Anyway, we didn’t get back all that late and the drive gave me a chance to wind down some.

I don’t know of a race next weekend around here. I haven’t really looked. Two weekends is the Tour of Kansas City, then the Tour of Lawrence the weekend after that. I have to train some, much harder, if I want to get back into race form by Lawrence. The circuit race in Lawrence is on the KU campus and has an incredible amount of climbing. If you have nothing to do that weekend, you should come by, it is a super fun weekend. Info above, click. 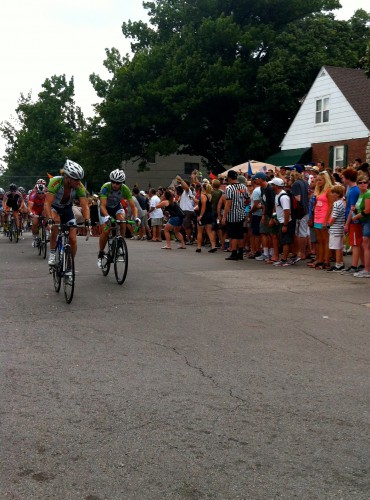 Brian and I at the top of Cry Baby Hill early in the race. 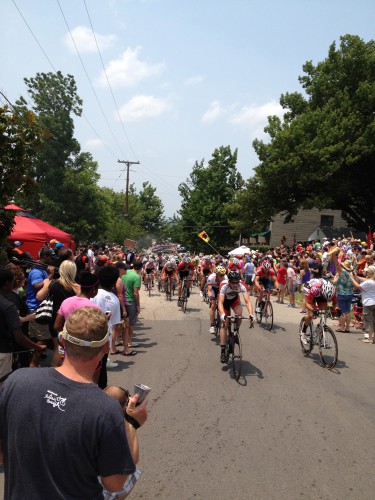 I took this photo of the women's race early on. The hill only got more crowded and festive as the day wore on. 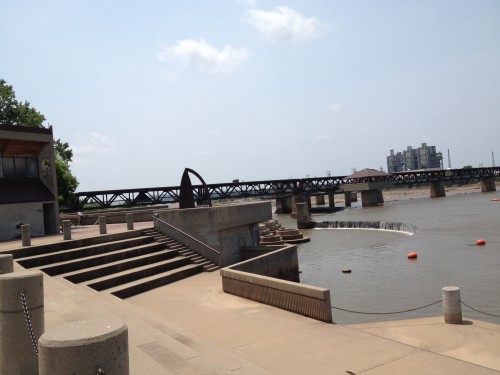 I was warming up along the river and it never ceases to amaze me how much money Tulsas spends on their bike paths. This bridge is a bike/pedestrian only bridge across the river. 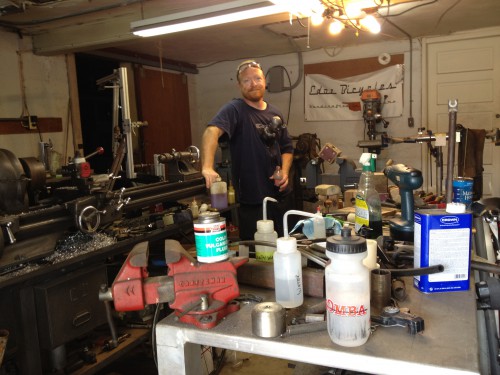 We were parked up on the hill and it turned out the owner of the house builds custom steel frames in his garage, which is really a machine shop. His name is Eric Doswell and he builds his frames are Edoz Bicycles. You never know what you’re going to find behind a garage door. 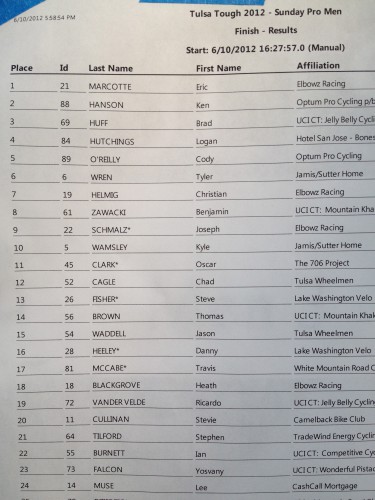 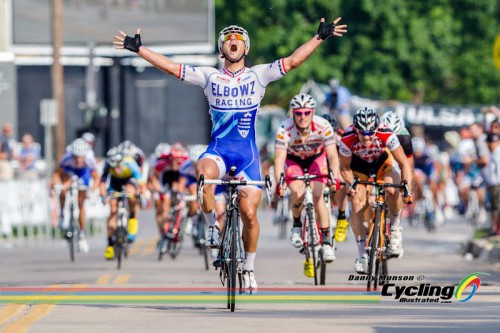 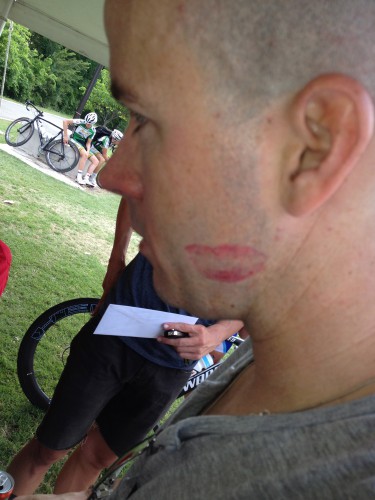 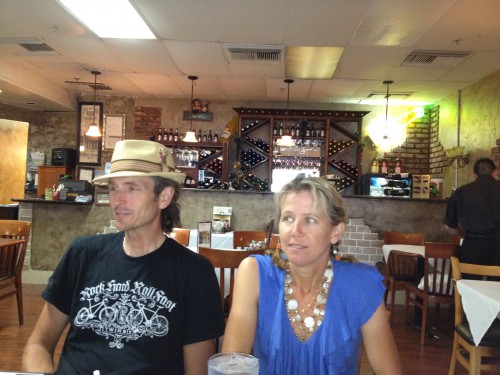 Keith and Catherine at the strip mall Italian place in Bartlesville. 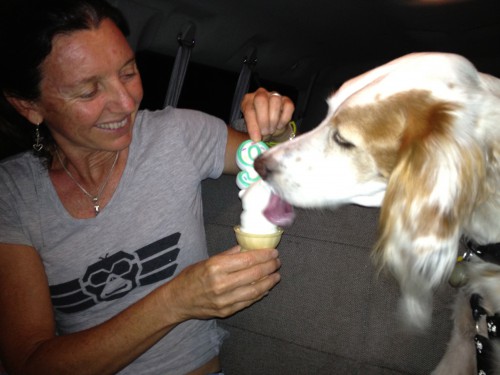