I don’t have the form for this. I really don’t. That is probably my biggest observation from last night. I hate, well I don’t really hate, but dislike it, when I have virtually no control of my own destiny in a bike race. A lot of times that might be the case when I am in shape, but I don’t realize it, but when I’m out of shape, there is no denying the obvious.

Last night wasn’t hard. I could move around the field pretty much at will, but it took a fair amount of energy. I was so oblivious to the front of the race that I thought that the break off the front at the end had 5-10 guys in it when there was only one rider. I’d thought two groups of 4 had gotten together and never saw anyone come back. I might of tried just a bit harder at the end if I thought we were sprinting for 2nd.

Once again, the race was fast. Right at 29 mph. And it has a long, shallow hill in it every 1 1/2 minutes, so it is hard. You have to concentrate on keeping your position at all times or before you know it, you’re at the back, where there is a huge “slinky effect”.

The race was noneventful for me until the last couple laps. I moved up into the top 20, but kept getting shuffled around. There were a couple crashes the last 2 laps. Justin Williams, Cash call was standing at the finish line when I went across, all ripped up. Anyway, I got shuffled back too far and started up the hill on the last lap about 20 back. Sean Sullivan was right ahead of me and yelled to some guy he knew, that wasn’t on his team and the guy drilled it. I stayed on Sean and we went around most of the front of the field. I was good until then. I made it into the narrow section at the top of the hill on Ken Hanson’s wheel, but that was when everything started going South on me. Brad Huff came by on the left and bumped in. I had to grab a bunch of front brake and then accelerate again starting down the hill. A couple guys went by and I was struggling to hold a wheel. I came out of the last corner a bike length off a Mountain Khakis guy and just floundered to the finish, another couple guys going by. I ended up 11th overall. If I would have been attached to someone starting down the hill or out of the last corner, I could have had a pretty good finish, but that wasn’t the case.

I’m pretty tired today. My shoulder is mildly done. The ortho guy told me I couldn’t do anymore damage to it than I’d already done, but it seems strange that it has a dull ache all the time now. Really, if my shoulder is my biggest problem today, I’ll be extremely relieved.

Today’s race is super hard. There is a hill that has its own name – Cry Baby Hill. Any named hill is something to respect. I’ve done this race a lot of times. It is a good course for me in general, but I’m not in general form. It is going to be nearly 100 degrees today. That isn’t good. Brian drove down from Lawrence, so I’m going to give it my best shot to help him get a good result. Bill is racing the Master’s race at noon. I doubt he’ll race the Pro race at 4:30 again, but you never know.

Once again, there is live streaming on the internet. Click here for the info. 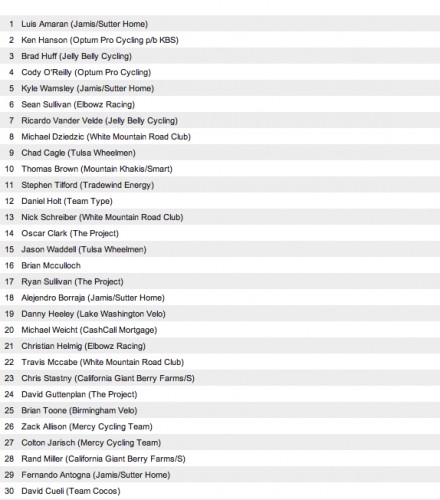 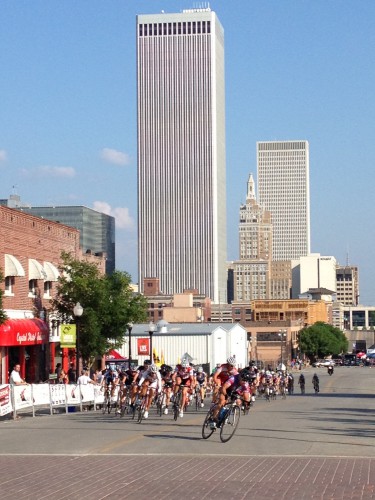 The women's field with the Tulsa skyline in the background. 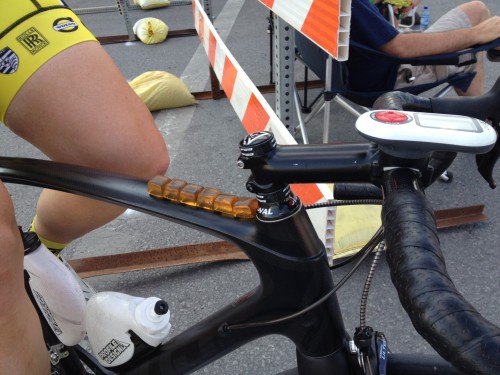 Is this the new way to carry your blocks? I hope not.