Last night in Tulsa turned out to be alright for me. Nothing to write home about, but better than anticipated. The race was fast, 29.6 mph average. Not hard, but fast, which was exactly perfect for a gimpy guy like me. I didn’t have to do a bunch of surging because of pace changing until the last few laps.

I guess Tim and the guys promoting limited the teams to 6 riders. I talked to Tim a few month ago about doing something like that, but didn’t know that he’d implemented the rule. Tulsa always has kind of a weird mixture of riders each year. There are only a couple Pro teams with their full 6 rider roster. I think the Pro-1 field had around 90 guys. The 1/2 race had nearly 130, which seemed giant watching it. The women’s race had nearly 60, which was awesome. They gave the women a $1600 crowd prime. Pretty cool. This race has sure grown throughout the years.

Only one move of any importance went during the 60 minute race. I don’t know what happened because I would have bet they were going to go around and lap us. Two Jamis riders, Sean Sullivan from Elbowz, and Mike Friedman, Optium/Kelly Benefits. They disappeared up the road, but I guess one of the Jamis guys attacked the group and destroyed the break. I’m not sure what that was all about.

I was hanging between 20-30 back the whole race. I was surprised how rusty I felt not racing for two months. It was mainly the shadows and turning. The course really is pretty technical, even though the road is wide. It is because some of the corners are very close to the next, so you have to switch directions a bunch, making it challenging. I felt out of sorts the first half for sure and was probably too tentative holding my position the last few laps.

I felt pretty within myself the whole night. One thing different, was with about 6 laps to go, the local AA baseball game did their fireworks display about on top of the criterium circuit. Man, talk about being spooked. For the next 3 laps, an important three laps, most of the riders were on edge. I didn’t realize how important hearing is when criterium racing. The constant explosions made the race seem so much more dangerous.

I was good until the end. Elbowz tried to organize a leadout, but too early, maybe 5 to go. It fell apart and all of a sudden on the last lap, Jamis put 4 guys on the front and started driving it. I was alright, but twice during the final lap, the rider right in front of me hit their pedals on a corner. I don’t have 3 accelerations in me right now. I lost about 3 or 4 guys each time, so ended up 19th. Ken Hanson, Optum/Kelly Benefits finally beat Brad Huff here. Huff was 3nd, Justin Williams CashCall, 2nd.

The 24mm Challenge Tubulars seemed good. I didn’t really get an opportunity to put them to an extreme test, but they seemed to corner fine. I rode a little under 100 psi in them. I’ll know more after Sunday’s race which has a technical corner before the finish. I needed to get some race miles in.

I can’t complain. The races this weekend get progressively harder each day. Tonight has a long, shallow hill, racing again at night. Tomorrow is a very hard course and the temperature is supposed to be pushing 100 degrees. Brian is coming down for that, so it will make it much more interesting for me. He’s won the race 4 times, twice Pro, then twice 1/2. The field is not deep enough to completely control a race that hard, so it should be good for individuals that are strong.

After these late night criterium races, sleep alludes me usually. The races don’t finish until 10pm, then you have to shower, eat, etc. One thing I always look forward to here is walking around downtown and checking out the scene. I’ve written it before here, downtown Tulsa is super interesting. Old architecture with modern building, in all different states of repair. And the people watching on Friday and Saturday nights is unparalleled. People leaving the opera mixed in with the homeless. Tons of young people doing the bar thing. It is just good all around.

I walked around an hour or so with Bromont, then went back to the Hotel room. Everyone there, Bill, Catherine and Trudi were way closer to sleeping than me. Bromont was done, it being way past his bedtime. His birthday is today, BTW. 9 years old. So, I just read until 2 am and the slept pretty shitty. Last night was the first time my separated shoulder has actually been painful in a few weeks. It was been bothering me some recently, but the bother isn’t pain necessarily. Last night was pain. Makes sense I guess.

I’m planing on napping most of the afternoon today. That is probably just a dream, it never works out that way when 4 people are in one hotel room. The women race at 6 and the Pro men race at 8:30. It is live on the internet. Click here for the live feed. 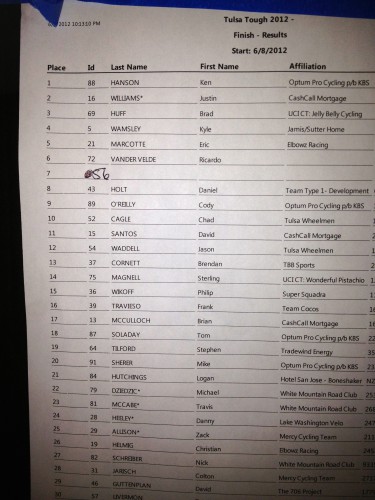 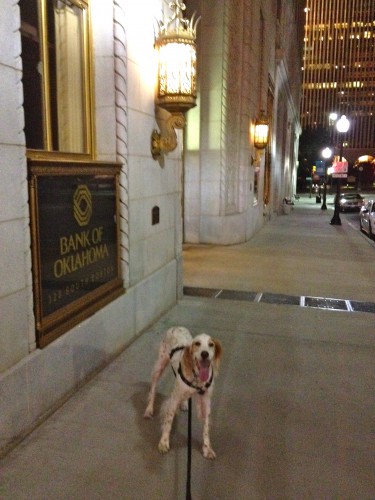 Bromont, at 1 am, doing his first b-day walk. 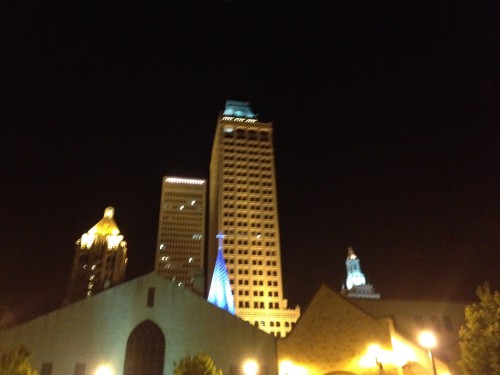 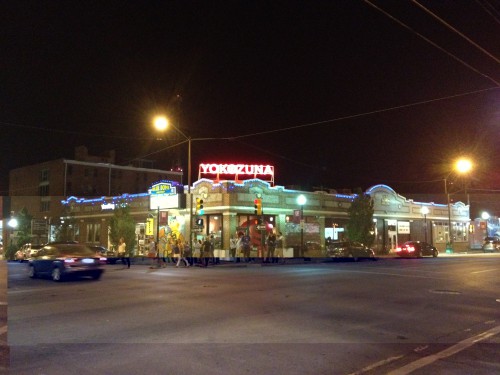 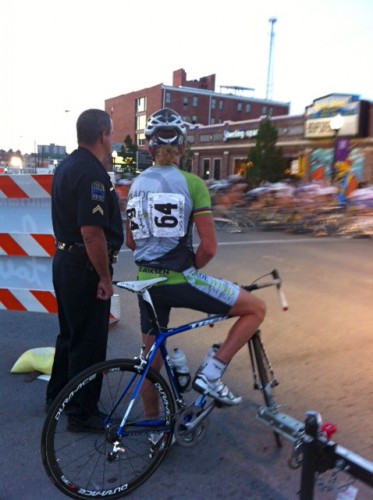 The local police were super interested in the tactics. 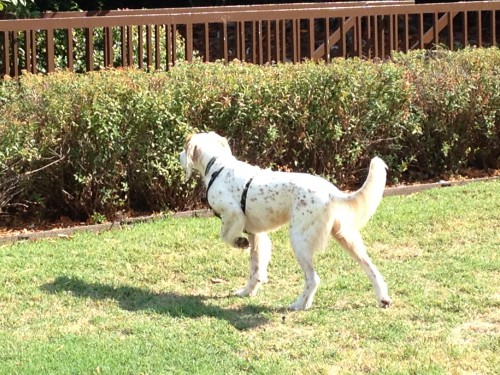 One thought on “One Down, Two to Go at Tulsa”