I’m just about packed up to head down to Tulsa for the Tulsa Tough NRC. I’m still not exactly sure how many races I’m going to do, if any. If any probably isn’t a reality, or I wouldn’t be driving down there, but you never know. I had a pretty bad night sleeping on my shoulder last night, so I’m a little crabby. I’m in pitiful form, so it is going to be a challenge no matter how you slice it, but you have to get back into the fray sometime. I think it’s been about a month and a half now since I fell. So, counting the race in Arkansas I did, that is exactly one race in two months. Like I’ve stated here, many times, I’m not like Wiggins, able to train to better form that race form. I need to race to get to race form. Hope this works.

I glued on some 24mm Challenge tubulars last night. I’ve been meaning to try them for a while now. I got them from Bill Marshall. Along with some 27mm. I think it makes a lot of sense to ride wider tires in criteriums. I’m not sure the rational behind them in road races, but I’m not that smart of a guy. But since all the rims are going to a wider platform, eventually a 21 or 23 mm tire isn’t going to sit right on them.

I remember riding all the Fatboy Criteriums in the Cactus Cup. A Specialized Fatboy tire was 1.25 inches. That is around 35mm. I could lean a MTB over crazy far on those tires. I hope these work as well.

All three of the races in Tulsa are pretty technical. Come to think of it, each of the last three years there, I’ve crashed at least one time during the weekend. That doesn’t make me too happy thinking about that right now. If I fall on my left shoulder, my arm isn’t going to be attached to my body anymore. Whatever.

Okay, I’ll let you know how it goes. Sometimes when I think everything is dire, it goes much better than anticipated. Hopefully that will be the case here. 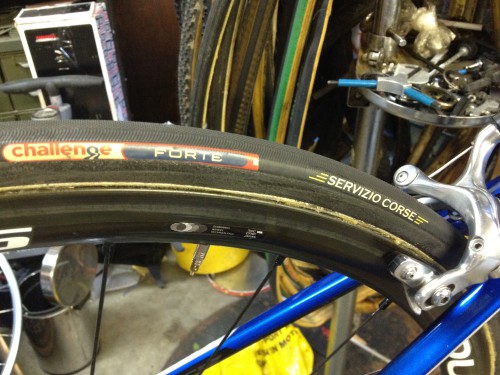 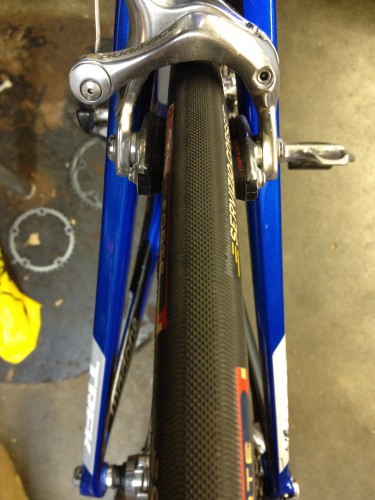 They don't look that much bigger than a normal sewup. I think I'm going to ride less pressure than normal. Maybe under 100 psi. 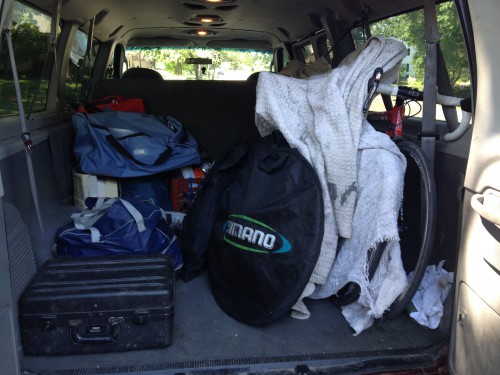 The van seems kind of empty. Only Bill's bike is missing. I must of forgotten something.