Yesterday my friend, Calvin Jones, sent me an email about a lot of different stuff. It kind of addressed some of the stuff in cycling we’ve done together and the thoughts about those very experiences. About Guatemala, the Iron Curtain, pertaining to US racing and development.

It got me thinking about what is the difference between ethics and morals. Especially when using those words in relation to the sport of cycling. Obviously, we all have a huge difference in both those concerning the sport. There are certain things that seem okay to me that to others seem questionable.

I have one example that comes to mind. It is a small thing, but I still think about it often when I address bigger issues in the sport. Anyway, one year at Superweek, at The Holy Hill Road Race, there was a big crash in the race before the Pro 1/2 race, so we had to sit in the parking lot more than an hour, maybe two, before they got us off. (I think the rider died.) Anyway, I was talking to my team and told them that the whole race was going to be over between 30 minutes and an hour. It was close to 100 degrees and the wind was whipping. There was no shade at the start area, so we were all sitting there roasting.

The race started and it started fast. Anytime there is a ton of wind on a circuit race, that is going to be the case. We got to the 2nd side of the course and the wind was coming from the left. That put the majority of the field over the center line. Pretty soon, Heidi and the other officials following, stopped the race. They said something about if we crossed the center line again, they were going to have to cancel the race. I took Heidi aside and advised her she should just let us race a couple more miles. There was hardy any distance left before we turned into headwind and then after a couple more miles it was going to be in the gutter, thus the race was going to explode. Heidi did just that and it was all good.

I think Brian won that race and I was in a small group going for maybe 5th or so. I thought everyone else on our team had quit because we had a ton of people handing up bottles in the feed zone. At the finish, after the awards, I said we should take off. Someone said that a guy on our team, Tony Wilhelm, a big, corn fed boy from Nebraskan was still out there. It had already been a long while since we had finished, but the race is about 100 miles. Anyway, Tony comes rolling in not that long later. He was by himself. So we pack up and go.

That night I talk to Tony about the race. He ended up finishing 25th, the last paying place, but at Superweek that is hardly enough to buy a Coke. I asked Tony when he got dropped and he said right when they restarted the race after the officials stopped us. I said that wasn’t possible, because it wasn’t that far to the corner. He said that he hadn’t crossed the centerline. I said, “What? They weren’t enforcing the yellow line rule.” He said that it didn’t matter because it was against the rules and he wasn’t going to break the rule. I tried to explain to Tony that the center line rule in cycling is like a foul in basketball. Something that everyone does once in a while, but try not to get caught doing it. That if it came down to getting dropped out of the field, especially when it was so windy, and crossing the center line, then you had to cross the center line. He didn’t go with it.

He emphasized once again, that it wasn’t right and it wasn’t something he was going to do. I asked him if he sped on the highway and he said no. I was amazed. His ethics in this instance were way beyond something I was going to understand. I’d raced 1000’s of bike races and had only been disqualified once for this infraction, when I was a first year Senior, in Texas by Tom Boyden, bless his soul.

I haven’t seen Tony for a while now, he lives in Colorado, but our little conversation has made me look at lots of other things much differently. I even apply it sometimes to the drug use issue in the Pro peleton and try to somehow try to figure out some of the issues better. I have to thank Tony for that.

One of the reasons I like the sport of cycling is because there really aren’t that many rules to follow. A lot of the rules are for the riders safety. There are some out there that seem ridiculous, but in general, compared to other sports, most of the rules aren’t too subjective. I like sports where they blow off a gun and the first guy across the line wins, compared to sports where a bunch of judges sit there and tell us who was the best. Basketball is kind of in the middle of the two, with the officials in control of much of the pace of the game.

I was watching the Bjarne Riis video below and thought how surprised I was that he didn’t seem to feel any remorse for earning his nickname, Mr. 60%, pertaining to his hematocrit (limit now 50%). I felt badly for him. Badly because he isn’t a smart enough guy to realize that in today’s cycling world, publicly, you need to act remorseful for using drugs, because it is viewed as cheating. It might not have been viewed that way, in the sport, when he was winning races, but it is now and he doesn’t seem to get that. You would think a guy that has made such a good life for himself by cheating would at least appreciate how he made it to this point of his career and act accordingly. His ethics are obviously much different than mine.

Below is an awesome picture of my friend, Dan Hughes, winning the Dirty Kanza last Saturday. He sent me an email asking me about a dilemma he was having after the event. It turns out that Dan and the other guy in the picture, Rusty Folger, had made a deal, towards the end of the 200 mile race, to ride and finish together. I guess, Rebecca Rusch, the women’s winner, was privy to the conversation and didn’t approve.

I have no problem with their arrangement. It was made between the two of them out on the road. I have no idea what they had experienced together or what either of them were trying to accomplish, but the mutual agreement to finish together wasn’t cheating. There was nothing immoral about it. They both had their own reasons for wanting to do that and they did it. Case closed.

Some probably think I am completely wrong on this. I accept that. Many believe, that in an event where you blow the gun off and first rider across the line wins, you should duke it out until the last millimeter. But, it doesn’t always work out that way. It doesn’t make it wrong, it just makes it different. It’s not that cut and dry, so both of them will probably be mulling it over in their brains for a few weeks until it just becomes a memory. Or maybe they’ll send each other an email, 30 years later, and still be pondering it? 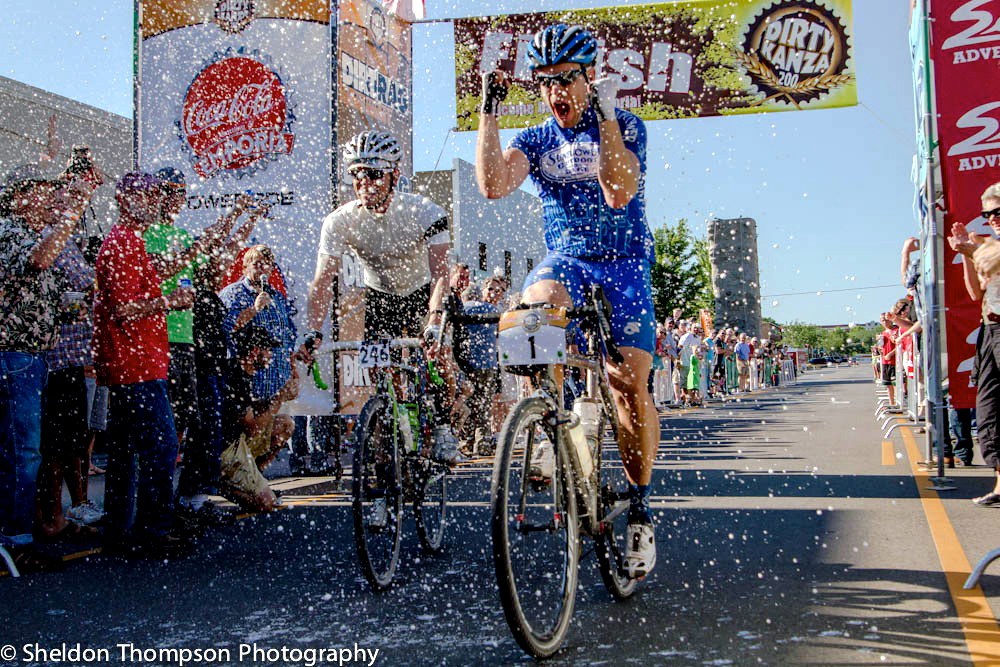