It is sort of funny because about a week ago, I got an email from my friend Gustavo Carrillo, who sent me a couple photos of when I raced there over 3 decades ago.

I raced the Tour of Guatemala for the US National Team back in 1981. It was my first experience of racing south of the border. David Meyer Oaks, a seasoned rider from Texas had been down there, South America, a ton and was going to look out for us greenhorns. David’s main advise for us was watch out for loose dogs. Then nearly at the start of the 2nd stage, David hit one at over 40 mph and we didn’t see him for the rest of the stage. Go figure.

Anyway, I have a million other stories from the race. I could post only about this race and it would take over a month. I won a couple stages and the points jersey, combination jersey (maybe even the Mt. Jersey too?). I got horrible dysentery on the rest day and was beyond sick for 3 out of the last 4 stages. I had a good amount of money coming to me if I could just limp to the finish of the race. I pretty much ate nothing for 3 days and stopped multiple times during the stages to poop. I was riding with a bunch of poor Guatemalan guys with wing nuts holding on their wheels, and they would stop and wait for me each time. It was mildly embarrassing, but pretty cool at the same time. I was doing IV antibiotics and won the final stage in Guatemala City.

Anyway, that isn’t the point here. The point is that the segment on This American Life was taking about the genocide of over 100,000 people in the early 80’s in Guatemala. And I was racing bicycles there then. At the time, I knew it wasn’t the safest place to be. It was surreal climbing through the jungles in the middle of nowhere and these people would come out of the trees, dressed in jeans and button up the front shirts, holding sub machine guns, watching the spectacle of a bike race pass.

It is so hard to try to remember when the world news wasn’t available. This American Life said that the US government knew about what was going on in Guatemala, but didn’t do anything about it. Thus, no knowledge by us cyclists going down there to compete.

Anyway, flash forward a few more years. By the early 90’s, I’d raced in a lot in South America. I’d been to Brazil, Venezuela, Columbia, Peru, Chile and a few more countries. I somewhere along the line made a decision that I wasn’t going to go there anymore. It seemed unfair to be doing something that the average South American citizen had no ability to do. My bike was worth enough to feed a family of 4 for a couple years in most of these countries. It seemed wrong.

But then I started racing MTB bikes and Specialized was putting on a Cactus Cup in Sao Paulo Brazil. I was pretty much hired to race Cactus Cups throughout the World, so I felt I didn’t really have a choice. After going down there and interacting with the people, I changed my mind about racing there. I realized that the normal person living there had no ability to do the sport, but I was an entertainer for them. It didn’t cost them anything to watch a bicycle race. It was something that they could look forward to and spectate without any cost. I made a lot of good friends there after that.

But, that doesn’t remove the “guilt” I feel about going to Guatemala when the government was exterminating whole villages and I competing in a silly bike race. I know that I didn’t have any knowledge of the atrocities being done, but it still leaves me with an uneasiness that I can’t shake.

I’m probably going to have to mull it over in my brain for a while before I can get a handle on it. It will probably happen on a bike ride when I’m thinking about nothing. 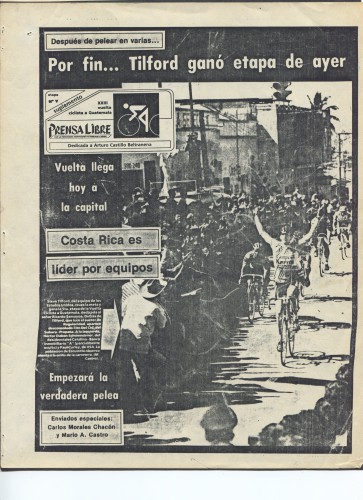 The amount of people watching the races was beyond amazing. I'm wearing a points combination jersey here. 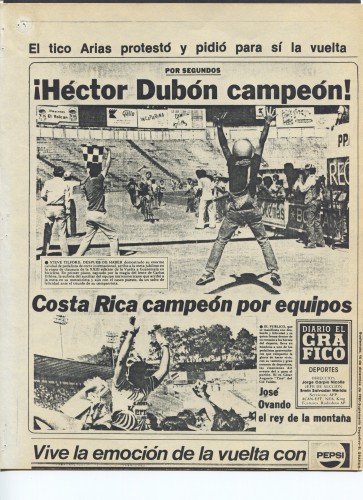 This was the final day in a soccer stadium in Guatemala City. We did a 40km climb to get there. I know the stadium looks empty, but there were a million spectators there. I was swarmed right after the line. I lost my shoes, helmet and gloves in the first 30 seconds after finishing. I spent over an hour in a police car on the infield because the crowds were so out of control.

8 thoughts on “Tour of Guatemala”