Okay, I had some good news on Friday. I did another ultrasound and the DVT/blood clot in my leg is going away. It was 2.5 cm and now it is 1.9 cm. And it was completely clogged before and now there is blood flow through the middle of the vein. Both very good signs. That was only after 10 days.

I’m a little up in the air with what I should be doing right now. The ultra sound doctor said I should take it easy another week, but after that, he didn’t say. I actually never talked to him. But, the technician said that he said I didn’t need any more follow up and was good to go. That sounds a little premature to me, so I’m figuring that it lost about 25% of it’s length in 10 days, so the other 75% should be close to gone in 30 more. I’m not sure that is good science for this problem, but I have no personal knowledge how quickly these things clear up once there is blood flowing through them. But, I’d be more at ease with one more picture of the vein with it completely clear.

I do think I dodged a bullet here by waiting for a 2nd scan before getting aggressive with medicine/anti-coagulation. It is so weird because I got a ton of advise from a lot of doctors, that I respect, and virtually everyone of the told me I needed to get on medicine immediately. But, the guy here said he would wait until he saw a 2nd picture. He was not big at all on blood thinners and thought since this thing was caused by crashing at 50 mph, then there was probably a good chance that it would clear on its own. Which it seems to be doing. If I hadn’t asked to see this guy, I would be taking coumadin for 6 months. Man, what a difference one guy with knowledge can make (In nearly all situations).

So, now I need to think about what I need to do for my shoulder. It is a mess. Not a complete mess, but it isn’t working up to my standards. Not even close And it seems not be getting any better. I think I’m compensating so much for the shoulder that my neck and back are pretty tweeked. My neck was bad ever since the accident, but it seems to be worse, which is making sleeping tough.

I think I’ll just ride for a couple more weeks and see if anything changes. That will be close to 2 months. Man, does time disappear quickly. I’d like to race in Lawrence Kansas at the end of the month. Actually, I’d like to race in Tulsa this weekend, then Tour of Kansas City after that, before Lawrence. This is the best block of racing the whole season close to home. It is going to be a struggle no matter what I decide. At least I have some choices now, I think. 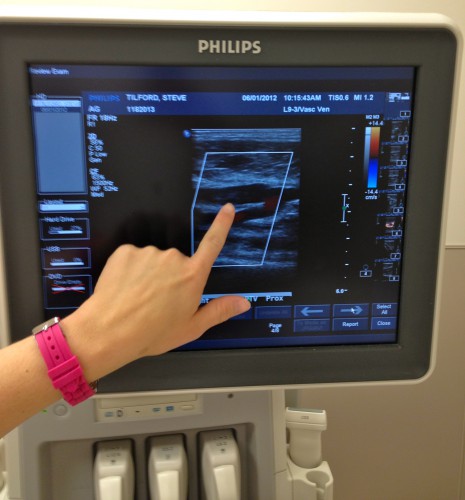 I took this photo when the ultasound tech was showing me the blood flow through my vein.