I wrote a post about how screwy it seems that these Tour contenders, such as Bradley Wiggins, take over a month off a couple times a season to just train. I personally can’t see being about to hold any form for that period of time by just riding.

I’ve always done the same thing. I train until I’m fit enough to race. Then I race and race to get into shape. It is easy. It is proven. It has been done for decades by thousands of pros.

Now, ever since Lance rode a total of maybe 12 (?) race days before winning the Tour one year, lots of guys seem to be disappearing for long periods. There are so many riders now, that you hardly miss the guys. It says here that Chris Anker Sørensen, Saxo Bank, is training at altitude for Tour de Suisse and the Tour. Man, with all these guys going MIA, the climbs in Tenerife must be much like trying to get to the top of Everest right now.

I think it is strange that in this day and age of exact science in training that the best riders could be so all over the map about whether it is better to race or not race to get into superior form. Tom Boonen said at the Tour of California that he was going to be flat because he hadn’t raced since the classics. And then Peter Sagan went and won just about every stage, even though he hadn’t raced since the classics.

There is an article at Velonation about Alexander Kolobnev. He had an issue with a diuretic and couldn’t race while they sorted that out. Then he had an accident and had to have surgery.

Anyway, he obviously hadn’t raced in a while. Kolobnev knows that he’s several months behind the other riders in terms of racing mileage. He wants to try to catch up and thus raise his form, and is receiving help from his team in that regard.

“I have asked to do as many races as possible in order to get back my rhythm,” he said. “My calendar is Trofeo Melinda, Gp D’Argovie, Tour de Swiss, National Championship, either the Tour de France or the Tour of Poland – we have to decide – then the Olympic Games.”

So, he is stressed that he doesn’t have the proper racing to allow his body to perform well in August, just all the guys that are trying to win the Tour and such, won’t have nearly as many race miles as he will.

My question is with all the testing that we have nowadays and the advancement of sports medicine, you’d think it would be proven which method is best. Because the methods are completely opposite. It seems like you could do power and blood testing and be able to figure out exactly where you are at every exact point during the season. “Resting” over a month seems extreme to me. Especially starting in April and when you’re winning races, resting, then planning to win the Tour.

I just don’t get it. 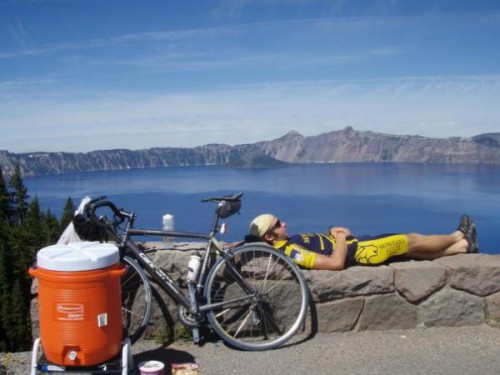 This is going to be the best race prep pretty soon. Getting dressed to ride, then casually cruising over to a nice viewing area and sleeping.