Wow, it is hard to believe that Ryder Hesjedal won the Giro on Sunday. It seems unbelievable, but it is also a good sign of things to come in the sport.

His win was a struggle. It was nice watching the climbing stages and not have everyone going up the hills at mach 5, breathing through their noses. To me, the race seemed more realistic.

I’ve know Ryder since way back. Since he was nearly a junior racing MTB bikes with Roland Green. That was back in the dark ages of the sport with the prevalence of drugs rampant in the road scene and was spilling over to the MTB scene. It was a very hard time to try to rationalize, as an athlete, what the reasons were to keep competing in the sport.

Ryder soon switched over to the road with the Discovery team. It took a while, but here it is, years later and he has won the Giro.

My friend and ex team mate Andy Hampsten is the only other rider from North America to win the Giro. That was back when everything was on a more even keel. Andy won the race just two years after riding his first Tour de France. He finished 4th in his first Tour and could compete with nearly any rider in the world on a climb. During that era, you could race here domestically and still go over to Europe and be able to win races with the best in Europe. That all changed somewhere in the early 90’s because of the prevalent use of EPO throughout the sport.

It is nice seeing the tide turn the other way. Guys like Taylor Phinney and other young riders that are going to get their chance to show their unbelievable natural abilities and not get lost in the background to a bunch of guys cheating to attain their stardom.

The Giro was very exciting to watch, especially the last week in the mountains. As the sport returns to a more level playing field, it is going to become much more exciting and spectator friendly. Mark my words. We haven’t been able to watch much of that kind of bike racing since it has become commonly televised here in the US. I think you’ll enjoy it that much more. I know I will. 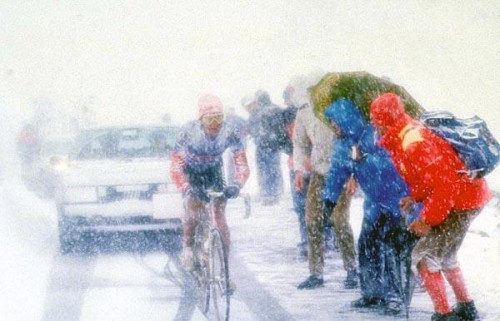 The day Andy took over the led on the Gavia Pass. 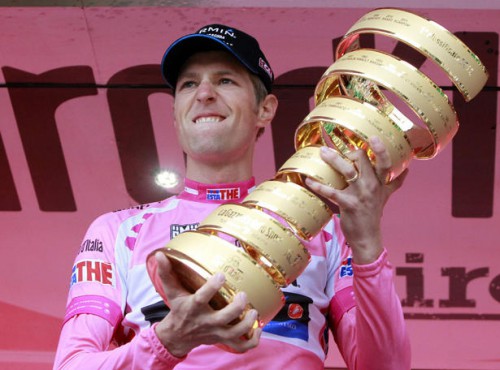 Ryder with the spoils.

6 thoughts on “The Giro”