Catherine was feeding us at the Crawdad Kermesse last weekend and she did an admirable job. It wasn’t perfect, but both Brian and I got ice cold bottles every time we needed them and none hit the ground. But, there isn’t much to worry about when it is a short lap and you’re coming by every 10 minutes or so.

Sometimes getting a feed can be the difference between winning and losing a race. It is getting to that time of the year when feeding becomes more and more vital. As the temperatures rise, the need to have the proper hydration is crucial.

I can go for a long ways without liquid. A lot of times I do 100 miles on a bottle. I’ve been trying to force myself to drink more when I’m racing and training. I think I’m getting better, but I do sometimes come home from a 3 hour ride with both my bottles still full.

Trudi is an expert at handing bottles and musettes. She’s been doing it forever and it is more of an art form that a process. She can hand bottles to 8 guys in line at 30 mph without a bottle hitting the ground. That isn’t an easy thing to do.

It is easy for me to identify the best and worst feeds I’ve ever had. Both, Trudi was the person. The best was at the Coor’s Classic during the Morgul Bismark stage. It was super hot and the feed zone was on a super wide open road. The lap isn’t that long, but I needed a bottle bad. I was drifting to the right to get a bottle a few hundred meters before the feed zone, when there was an attack up the right side of the road. All of a sudden there was mob everywhere and I was right in the middle of the pack, maybe four guys over from the side. Trudi was there and made eye contact, but I wasn’t anywhere close. I sat up and said, “Trudi” and she just pushed the bottle into the air and threw me a knuckle ball with the bottle. The bottle just floated over the field, and I just stuck my hand out and it magically was there. I could feel the eyes of all the riders next and behind me follow the bottle through the air and into my hand. It was amazing. The race slowed down for about 1/2 a lap after that and it gave everyone something to talk about.

The worst time was when I was riding the Oak Glen road race in Redlands one year. It is 106 miles and there were two feed zones. I’d been racing MTB bikes for quite a while and was using Redlands as training. Trudi had managed the Schwinn MTB team and then the Specialized Team for the past few seasons, so she had not been doing any road stuff for quite a few years. Anyway, the feed zones were at 40 something and then 90 something miles. It wasn’t too warm out when we started, so I only started with less than a half a bottle, knowing I’d be getting fed in an hour and a half or so.

Anyway, Trudi always stands the last person of the feed zone. That way you don’t get caught up with all the riders swerving, frantically getting to their bottles. It was rolling along pretty briskly, not actually an attack, but fast. I wasn’t at the very front, but in the first 20 or so riders out of 180. Anyway, right when I’m spotting Trudi and getting over to the right, a Mexican guy was running along trying to get a bottle to someone that missed his feed and ran into Trudi. She didn’t fall, but didn’t get out far enough to get me the bottle. I didn’t panic, but soon I realized it was nearly a fatal error. It got much warmer the next couple hours. It was 50 miles between the two feds. All the Pro teams were dropping back to their team cars and getting bottles. Guys were throwing nearly full bottles off. For some weird reason, I never got one from another rider. Anyway, the last feed zone was at an important place in the race. It was so close to the start of the final climb, the positioning in the field was super important. I was riding through the feed zone, trying to keep my position in the field and trying to spot Trudi. But, no Trudi.

I did okay that day. I got to the bottom of the Oak Glen climb in good position and rode up the hill pretty well, finishing somewhere in around 20th I think. It was still hot at the finish. Trudi was there. I asked her where she was at the 2nd feed zone and she said she figured it was too close to the finish and figured I wouldn’t need a feed that close to the finish. I think she might of figured that I’d gotten a bottle from some other team, but I never did. So, I rode 106 miles, pretty hot, with about 1/3 a bottle. I guess it was lucky that I can get by without drinking much sometimes.

The key to feeding properly is remaining calm and making eye contact with your riders. There is no running or movement by your legs in the feed zone. You stand facing the field with all your bottles or musettes in your left hand/arm. You fed with your right arm only. You only extend the bottle when your rider is close. After you make eye contact, you extend the bottle and look down the field for your next rider.

You also need to judge the speed of the field. If the peleton is going by fast, you need to move your arm to help match the speed of the field. But, you don’t tilt or change the position or height of the bottom when doing so. The bottle has to be steady at all times. Some guys hold the bottle by the top and let them dangle. Trudi holds them by the bottom, so not to get here arm anywhere near the riders hands.

When you’re handing up musettes, you need to hold the musette as high as possible. The riders grab the musette right at the top of the bag, where the strings attach. You don’t want the thing swinging at all. Especially not low, low enough to get into the riders wheels. The rider is responsible for grabbing it correctly.

I’m not big on riders dropping back to their team cars for feeds. I think the feed zone had been a very interesting part of a bike race historically, and something that can sometimes alter the results, which isn’t necessarily a bad thing. There is no question that having a experienced professional in the feed zone is real asset to a team. And there are many ways a rider can learn to get through the feed zone more efficiently, with less chances of hazards, but still shit happens. It’s best to keep your head up when approaching and riding through a feed zone. And always make eye contact with your person. 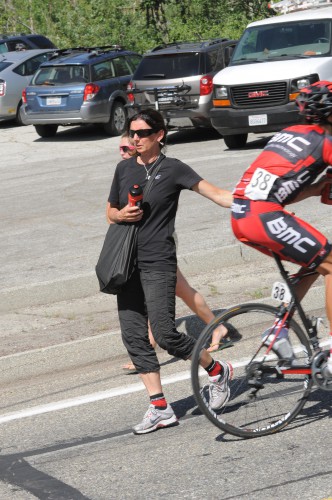 This is Trudi on Mt. Baldy on Saturday at The Tour of California. You see how the rider already has the bottle and she is already looking for her next guy. 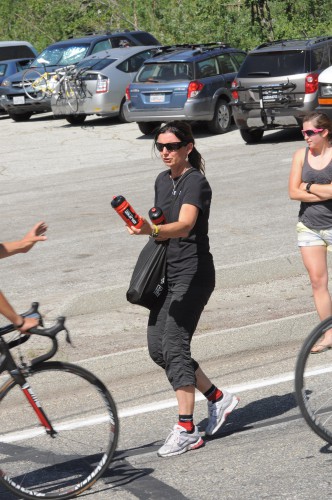 Trudi is being stealthy here, dressed in all black. It was too close to the finish for an official feed. 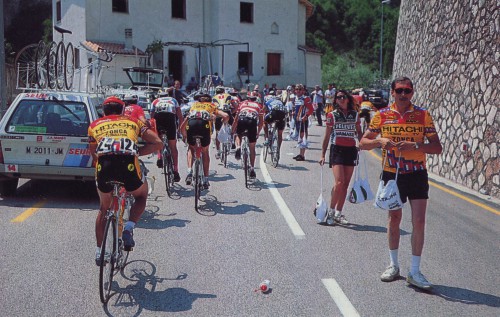 This is Trudi at the Tour de France, maybe around 1990. 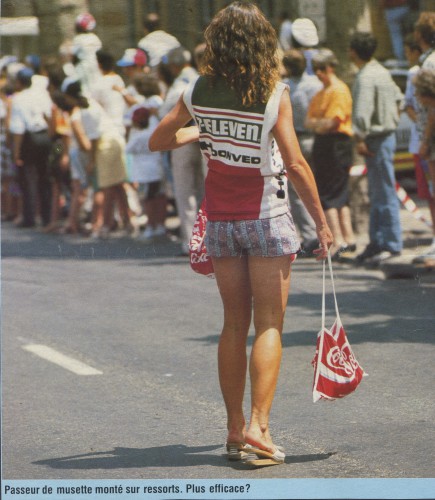 This is Trudi again, Tour de France. I think the caption is mentioning her spring shoes. She could probably do the job on heels.

7 thoughts on “Feeding is a Work of Art”