Last weekend was a pretty great bike racing weekend for me. I had a day to think about the Crawdad Kermesse race down in Harrison and realized that the race there is much of what racing was when I first started the sport. It was a very well thought out course, Chad and the guys promoting the event are totally into the sport and are promoting the race because of that, not to turn a dollar. It was challenging, yet a blast. I’m telling you, if you’ve never been to the state of Arkansas, you need to put it on your bucket list because it is wonderful.

Down in Georgetown Texas, Joseph and his Elbowz guys beat up everyone. Results here. They got 5 out of the top 6 places. I figure they cleared close to $9000 plus for their efforts. It’s always nice to be on that end of the deal, but shitty being on the other end.

Then the “big” races going on this weekend, the Tour of California and the Giro had crazy good days too. First in California on Saturday, Chris Horner puts in a crazy insane attack, with his Radio Shack team, and rides up to the base of Mt. Baldy in the lead. I wish more guys would take these huge chances, no matter what the odds are. Robert Gesink, Rabobank pretty much schooled everyone, but maybe the Columbians, on the final climb, and won the race overall that day. Tommy D. held his own, moving up to 3rd overall, with TJ and Dave Z cracking pretty badly. It was a pretty good viewing.

Then on Sunday in the Giro, it was an awesome race. Here are the highlights on video. If you have an extra five minutes, you should check it out. The race was great for me because of the stage winner, Matteo Rabottini (Ita) Farnese Vini – Selle Italia never gave up. The guy takes off over 55 miles from the finish, in the rain. He falls on a descent and it looks touch and go for him all the way to the end. Finally on the last climb, his led is crumbling rapidly and he gets caught by Joaquim Rodriguez with 400 meters to go. Instead of throwing in the towel, he accelerates and latches on to Rodriguez’s wheel and pips him at the end for the win. It was great.

Anyway, if your a fan of the sport, as I am, then it was just about the perfect weekend. I got to go to a new race, that has the potential for being epic, to get me back into race mode, sort of, and then two epic finishes in different parts of the world. Man, look how much technology has changed to allow this. In such a short time. It is amazing. 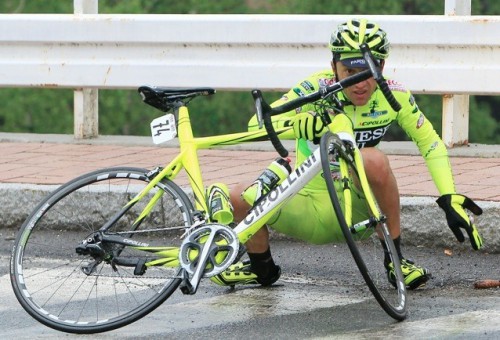 Matteo pushing it just a little too hard on one of the descents. You have to give the guy credit. 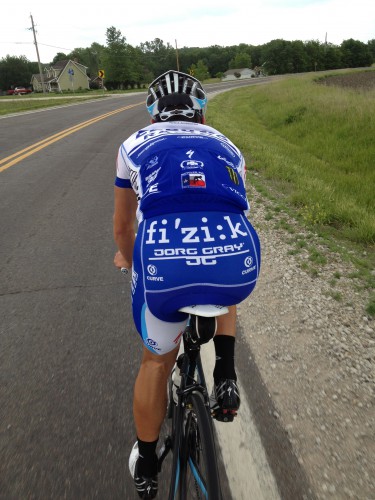 Following Joseph last week when he was doing a "10 minute medium", whatever that is. 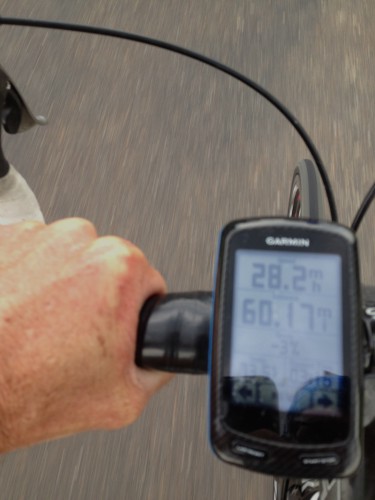 His medium was never less than 28 mph and mostly over 29. He had over 90 miles at that point. Pretty good.