I’ve been following Lawson Craddock for a while now. He popped up on my radar screen a few years back racing in Texas. One of those young kids that could rip people’s legs off. He was very good then and just keeps getting better in leaps and bounds.

A year ago in Laga Vista, Texas, it got down to a small group of us on Sunday. It was towards the end of the 85 mile race and Heath Blackgrove had shelled us. There were only 5 of us left. Stefan Roth, Andrew Dalheim, Christian Helmig, me and Lawson. Lawson put in a crazy hard dig at the top of the hill. So hard that he nearly shelled everyone. The thing about it was that he was sitting on his seat. It is steep, probably close to 15% and he was attacking us seating while we all we going 100% off our seats. He went a little too hard, as it ended up, because Stefan countered and he, Christian and I rode away from the other two. But, that isn’t the point. The point is the guy has unbelievable power on his seat.

This last month he’s been on top of his game. Winning the hardest stage at Gila a couple weeks ago. He has finished twice in the top ten in field sprints at the Tour of California. Then to top it off, he was 12th in the TT today in Bakersfield. What can the guy not do? If he climbs as well in California and he did in New Mexico, these next three days could be interesting. He’s currently in 2nd in the young rider category, but I’m thinking the Australian that is winning isn’t going to be so good on the longer, hard climbs. We’ll see.

Anyway, he is progressing pretty rapidly. My only complaint about the guy is that he never, ever updates his website. (I’m going to leave a link on the column on the right, just in case he ever does.) I guess he’s just too busy becoming a superstar. 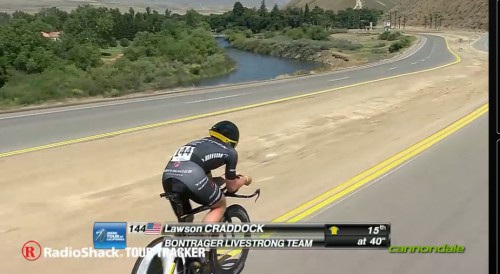 On his way to finishing in 12th today in California, with the big boys.

One thought on “Lawson Craddock – The Dude is Good”