Stephen Roche, past Tour de France, World Road Race Champion, Giro Winner, father of Nicolas and now an UCI appointed member of the Professional Cycling Cancel, made a few statements about the problems with the sport, in his view. He talked about using cars to get back to the field and unzipped jerseys. Jonathan Vaughters, Czar of Garmin, called Stephen out, and said there were many more important issues than these silly ones.

I would tend to agree with Jonathan in the big picture, but I am sick of these guys getting pushed back up through the caravan when they have a problem. It is full on cheating and I think the officials need to get some balls and start calling the teams on it. The sticky bottle is bullshit. The fake adjustment of the brakes is bullshit. The spraying the topical antibiotic while holding onto the car is bullshit. The deal is, you have to pedal your bicycle from the start of the race to the finish of a race. That is what you signed up for. You have to pedal it and propel it yourself. No timeouts for mishaps, crashes, mechanicals, nothing. Pedal from start to finish. It’s a very easy concept to understand.

I don’t have a problem on drafting through the caravan to get back to the field. That is a part of the sport. I don’t see a way that you could or should stop that from occurring. But this acceleration, holding on or getting a bottle or fake bicycle adjustment has to stop. It is completely unfair and stupid.

Case in point was yesterday’s stage at the Tour of California. The race leader, Peter Sagan, got caught up in a crash on the first big climb. I was just about ready to ride myself, but wanted to watch him get back on. I got my phone out, for pictures, because I knew it was going to be wrong. The guy held on to a bottle and got towed away from George Hincapie, who had also fell, and a small group. Then he motor paced for a bit. Again, held onto another bottle and accelerated up to 30 or so, and then shazam, there he was, back in the field a couple kilometers later. And this whole time, the Garmin guys and RadioShack were stringing it out in the front, when they knew that a bunch of guys had fallen. (That is a whole nother matter.)

I’m sorry, but you should have to pay a penalty for the unfortunate occurrence of falling or having a mechanical. Sure, no one wants the race to be decided by either one of those problems, but, it is a part of bike racing. If you think that it’s okay, then we should just make a rule that the rider gets to hold on to a motorcycle and go back up to the position he was before the accident. But, that isn’t the rule. And I don’t want that to be the rule. I think the guy should get back up to the group either using the caravan or having his team come back for him. Those are the two choices.

I’m sure the riders and teams tolerate, and participate too, because when it happens to them, they would like to do it. But, that doesn’t make it right. In reality, Peter Sagan used less energy in the bike race because he fell than if he would not have fallen. That is a fact. It is bullshit. I’m not saying he wouldn’t have won if he didn’t do it, but that isn’t the issue here. The UCI needs to start enforcing the rules. They need to do it slowly, so not to penalize someone too harshly for something that has been tolerated for so long. But this has to stop. The sooner, the better. 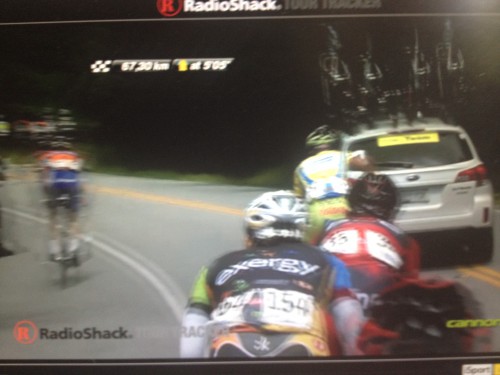 This was right after he got going. He was behind this group until he held on and blew by them. I guess that is the advantage of having the first car in the caravan. 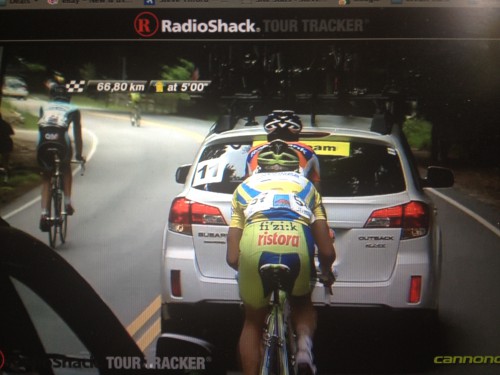 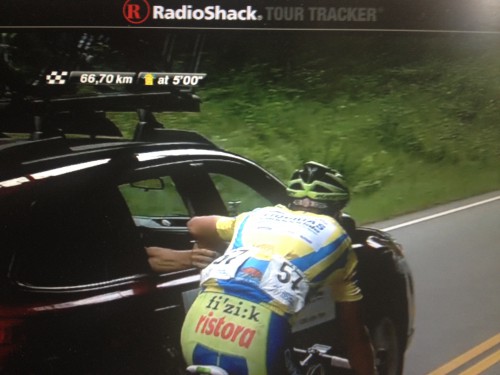 until....he got ahold of his car again and dropped the Rabobank guy. 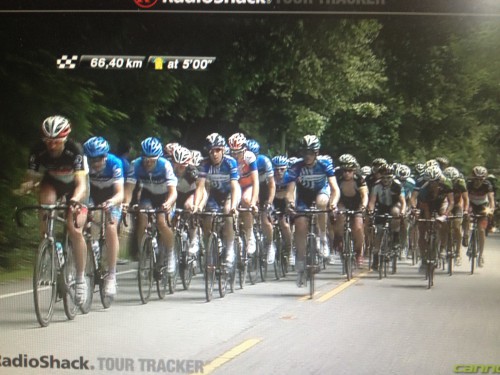 And all the time, these guys were not letting up waiting for all the guys that fell.

18 thoughts on “Holding on to Cars, during Races, is Bullshit”