Yesterday wasn’t a great day for me. I crashed descending the TT course at Joe Martin and separated my shoulder pretty good. It was shitty luck.

It is funny, I was sitting at the car 30 minutes after I fell, getting patched up by a park ranger, and thought about how strange your mind deals with things such as stress and pain. One minute, I wasn’t really looking forward to riding, yet alone racing, up the 2.5 mile climb and the next minute, when I can’t race, I am thinking how nice it would be to race up the 2.5 mile climb. I have no idea why that is.

The day didn’t start out so bad. We got to the course a couple hours early. There was a break in the schedule before the PRO women went, so I got dressed quickly and headed up the hill. The course was slower than some of the previous years I’ve done it, with it being headwind towards the top. I rode the TT, with no warmup, but a little faster than training pace in 10:13, according my Strava download. That gave me some confidence, knowing I was going to take a significant amount of time off that racing.

Anyway, I rode 10 miles out past the TT finish and turned around. When I got to the TT course, it is all downhill to the car. The women were racing, but the course is open to descend. I just kept going downhill. It is pretty fast, somewhere in the upper 40’s without totally railing the descent. About 2/3 the way down, I was tucked, with my hands by the stem and I started into a left hand corner. I was going pretty fast.

I knew something wasn’t right immediately. My mind registered that I was at the wrong angle. I realized I was falling, but didn’t have a clue why. Somehow, I got my left foot out of the pedal and was tripoding for a bit. I was pretty proud of myself for what seemed like a few seconds, but probably was more like a fraction of a second. Then, I was tumbling down the road and ended up in the outside ditch.

I had just passed a woman that had finished the TT and she stopped and asked me if I was okay. I was pretty dazed. I told her I was fine, but didn’t really know. I’d hit my head pretty good, but remember about everything. Soon, a truck comes down the road and some guy gets out and said he was up around the corner and heard the crash. I think he was wearing an uniform, but I’m not sure about that. He asked me what happened and I reply that a squirrel ran out in front of me and I swerved and fell. I have no idea where that came from.

He says that he should give me a ride down the hill and I tell him I’m okay. But, at that point, I knew that wasn’t true. My left shoulder was handing about an inch low and was started to throb.

I was checking my wheels to make sure I could get down and my front tire was virtually flat. It had about 10 psi in it. So that explained it. It made me feel better, but not much. If I would have been riding my race wheels with tubulars, I bet I wouldn’t have fell. You can corner pretty well on a flat sewup, but not at all on a clincher. Anyway, what are the chances that would happen at the fastest section of the ride when I don’t have my hands in good postion? I’ve never flatted before in a corner on a descent. Guess it is about time.

Anyway, I got back to the van and told Bill. He wanted me to head off to the hospital, but I told him I was in no rush. They weren’t going to do anything anyway.

So, after the race finished, I went to the hospital. It was a slow and frustrating process as always. I’d give the hospital staff a rating of 3.5 on a 1 to 10 scale for competency and efficiency. I really didn’t ever know what person the doctor was. He never introduced himself and never got with in 5 feet of me. I told him a few times that my shoulder hurt and that my neck was tweeked, but when it was all said and done, they never even addressed my neck. And never cleaned anything. It was pretty much, put in a IV, inject a pain killer, take an x-ray and out.

I have a cat 4 separation of my left shoulder. I haven’t had time to read up on it much, but the guy (doctor) said it was separated 2.5 centimeters and won’t heal itself and needs surgery. I don’t know about that.

I spent an hour in the tub trying to scrub my wounds. That wasn’t a fun experience. I’m usually pretty against other people dealing with road rash, but in this instance, I would have appreciated them just doing it at the hospital. I think that maybe the staff there thought I didn’t have insurance or something, even though I told them at check-in I did. I’m not sure why it was such bad care because the place was pretty empty.

Anyway, that private jet flight from Dallas to La Jolla this afternoon is looking pretty good right now. Too bad I don’t have the energy to do the 300 mile drive to get down there. I think I’m going to just hang here for the weekend. I don’t have much else to do right now. I did get an prescription for Perocet. I wouldn’t have slept a minute last night without that.

I’m usually don’t stress much about these things. It is all part of the sport. But I would have rather just broken my collarbone if I had a choice. These shoulder things are a drag. Plus, for some reason, this one is incredible painful. Okay, I think I’ll go back to bed and try to add to the 3 hours of sleep I got last night. 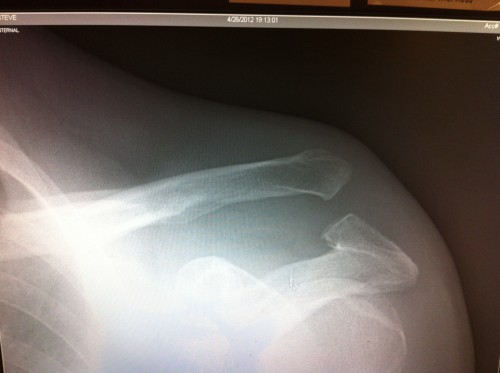 I took this picture off the computer monitor. I'm not sure what I'm to look for that is important here, but it doesn't look so good. 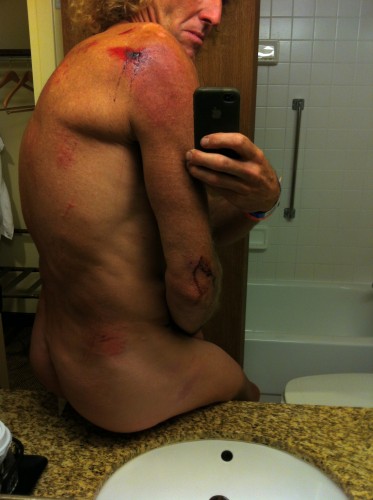 A little racy. This is how I came back from the hospital. I wasn't too ripped up considering, other than my butt is not good also.

I grabbed this off my Strava download. I was going 47.1 mph when it drops to 0 mph. Pretty shitty luck.