Yesterday was the first criterium I’ve done in the last 8 months. I was figuring, backwards, when the last crit I had ridden and came up with Labor Day last fall. Man, that is incredible. And let me tell you, it seemed like I hadn’t done one forever.

I can’t really tell you if the race was easy or hard, fast or slow. I wasn’t having a good day. Not even close. I only felt within myself a few times, luckily that was towards the end of the race.

There were 80 guys at the start for the PRO 1-2 start. I guess the racing was agressive. It slowed down some a few times, but it was usually going pretty good at the front. There was $1000 in cash primes, so that kept it active at the front. I never contested a prime. I didn’t have it within my ability. Actually, I did have it in my ability, but I would have been history if I did it. And it was much more important getting some speed work into my legs than mess around trying to collect some $$$.

Heath Blackgrove, Elbowz, rode away with about 10 laps to go with some other guy and it was going to be a race for 3rd. Heath was riding off the front last weekend in Charlotte, so he wasn’t going to have much trouble here.

The funny thing is that when it got down to laps being counted from time, 6 to go, it was much easier for me, even though it was faster. I feel better sometimes when the pace is closer to 30 mph than when it is just a little slower. That is, of course, as long as I’m behind somebody. I don’t have a 30 mph pace, by myself, in my body at this moment.

I kept pretty good position the last few laps, usually in the top 10 and slotted in 4 or 5 guys back on the last lap. The normal masses were moving up in the corners, but I was still okay with 3 corners to go. The Elbowz guys were kind of doing a leadout, but were not trying to catch Brent Crosby, who was hanging just off the front with 1/2 a lap to go. Jason Waddell and Chad Cagle, both Tulsa Tough, came blowing by me on the last long stretch before the last couple corners. I had nothing left and ended up 6th in the field, which put me 8th for the day.

Like I said above, I have no idea what that result means. Not much to me. I hate being in races where I have no control of my destiny. That was definitely the case here. I was at the mercy of the field. It is humbling and painful.

Today is a do over race I think. The same course at the same time. I don’t like those races much. It doesn’t happen too many times during the season, but when it does, I seem to lack motivation because of boredom. Hopefully that won’t be the case today. 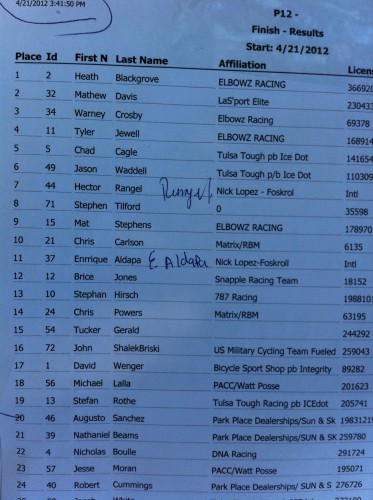 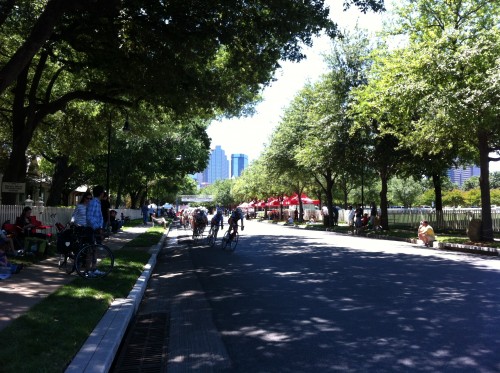