David Millar is back in the spotlight, not of his own doing, because WADA ruled that athletes can’t be banned from the Olympics after a positive drug test and that the British Olympic Association is appealing the decision to CAS.

Finally, someone says it like it is. “Guaranteeing to win” was the quote. I have always hated reading when people say that these oxygen manipulating drugs just make you a little better. They make you so much better the results are unbelievable. That is a fact.

The problem is that David Millar says a lot of stuff. I did a couple posts last year on Millar and his stupid quotes. So, I can’t really use this new statement as prove of my beliefs if I discard most of the previous stuff he has said. Here is a link to a post that has a video of him saying that he didn’t even need to use EPO to win the World TT Championships because he won by so far he would have won without it. Considering how rampant that the drug use was in those days, he kind of contradicts himself because there were lots of other guys using it and he was the guy that won, “guaranteed”.

David goes on to state in the recent article – “People do make mistakes and I think they should be punished. But they should be forgiven and given the opportunity for a second chance. We are human beings. Why should sports men and women get punished harder than people in the normal world?”

David needs to get real here. Punished more than people in the normal world? Does he think that not being able to participate in the Olympics is more punishment than “normal world” people are treated. Wow. I’d love to see the trial of the admitted, serial rapist when the judge is deciding the punishment after the guilty plead and the judge says, “Sir, you’re not going to be allowed to race bicycles in the Olympic games.” I bet the rapist would be devastated with that punishment.

Athletics isn’t a right dude. Personally, I don’t think you should be racing bikes at all, sorry. And for sure, you shouldn’t get a “second chance” to win a medal at the Olympic games. You blew that a long time ago. 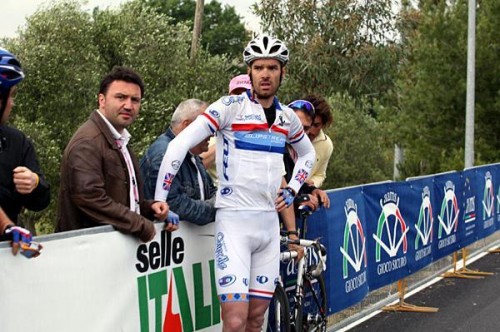 David striking a pose, after tossing his bike over the barriers, a few years back, in the Giro when he broke his chain.