That pretty much describes yesterday’s road race at Skiatook Lake, North of Tulsa. I don’t know what the problem was really. Probably a lot of things adding up to nearly a total disaster.

For one, this clock forward thing sucks. At least the night it happens. Especially when you’re starting a road race, in the rain, at 9 am in the next morning. I got up before six to try to get everything ready and Bromont all taken care of before the race. I under estimated the time it was going to take to drive out to the race and got there less than 15 minutes before the start. That is not like me at all. Needless to say I was rushed. Rushed enough that I didn’t realize how cold it was or something. I really can’t explain it, but I missed it badly.

The course was pretty great. Close to a 20 mile loop with 3 okay climbs per lap. It finished going 300 meters up, so I liked that also. But it was in the 40’s and wet. It wasn’t raining at the start, but after one of the three laps, it started down pouring. I had a clear plastic rain jacket in my pocket and put it on pretty quickly. But it was already too late. I was way too wet and cold. I never got warm again the whole race. So, the last 2 hours I was frozen. Frozen enough that I lost most of my motivation for the race.

Flash forward to the last lap. There were maybe 25 guys left out of 40 (??) starters. One OKC rider, Brady Schmiedeberg had taken off and was out of sight, a couple minutes ahead. I thought he was gone. I was hanging at the back of the pack trying to figure out how to get warm. The descents were killing me. On the last climb, about 10 miles from the finish, I decided to go hard from the bottom up. I’d put in a couple digs the previous two laps, but everyone eventually caught back on. So I went earlier. I wasn’t really attacking, because that would involve an acceleration. I didn’t seem to have any accelerations at all, just a fast steady state from the bottom to the top. When I got to the top, there were only 4 guys left. I just kept pulling over the top for another minute or so until everyone would start rotating. We didn’t really get going and 4 more guys caught on. There were two riders off the front at the time and we caught one of them, Bob Cummings pretty quickly.

The 8 of us kept rotating pretty good back to the finish and caught Brady less than 3 miles from the end. My hands were not working. I was trying to take off my rain jacket, but was having trouble. I took my gloves off, hoping that would help them work, but I think I waited too long, because they didn’t get any better.

The end of the race was not good. I think, just like the day before, I wasn’t focusing on the task at hand. Jake Laskey took off with about a km to go. I started to chase him and thought better of it. My problem was mainly I couldn’t shift. At least shift into a gear of my choice. My bike was working fine, just my fingers weren’t. So Jake got 100 meters ahead turning the last corner up the finish climb. I dropped back 5 guys and was trying to get into the right gear to climb the hill when we turned.

I was paying too much attention to my right shift lever to notice that Nick Coil and Jacob White had separated themselves from the two guys in front of me. I looked up and saw the gap grow. So, I gave up on the shifting thing and decided to just grunt up the hill. I passed the two guys in front of me and rode up to the back of Jacob, who was on Nick. But, right when I got to Jacob, he took off, in the right gear, and smeared us. I was in something like a 53 x17 and just rode up to the finish at 50 rpm’s. I had gone by Nick and everyone else had already exploded. We passed Jake, so I ended up 2nd.

I crossed the line, did an immediate u-turn and head back down to my car. That is when the fun started. I couldn’t unzip my jersey. I tried for maybe 5 minutes and finally had to ask a woman to help me. Then it was the zippers on my booties. Probably a couple minutes for each one. I wasn’t shivering or anything, my hands just didn’t work. It took me just as long to put dry socks on my feet and everything else that involved using fingers.

So, 2nd was the result. I don’t really know what to say about that. I guess I can be happy that I didn’t completely pull the plug and stop like a lot of guys. Or worse yet, not show up. But, I don’t blame those guys now (Matt, Jason, Chad, etc.) It wasn’t pretty.

I was so stiff the rest of the day. Every time I got out of the car, driving back to Kansas, my legs felt like they had syrup running through them. Last night my neck and arms were toast.

I rarely get cold in a bike race. I can count the number times I have riden a whole race in a clear plastic rain jacket on one hand. I think I’ve only been cold wearing one of those a couple times before. This was definitely one of those times.

I usually ride much better in the rain and cold. I never felt good. Never that numb leg, push any gear, feeling. I was hoping for that. I’m glad I did the race now that it is over. But, I’m glad it is going to be in the 80’s most of this week. I could use some warm weather to train in for awhile. 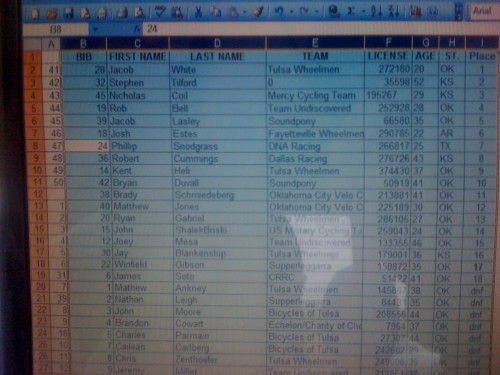 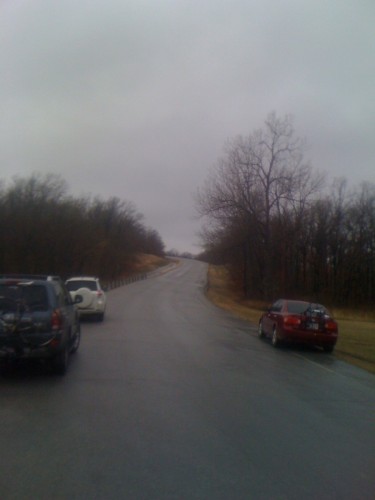 This is the finish climb. The line is a couple hundred meters around the left hand bend.