I’ve spent a fair amount of time messing with different diets/nutrition throughout my cycling career. I was a vegetarian from 14 until the first time I went to Europe in 1980, so that was nearly 6 years. Then I kind of was a poultry and fish only meat guy, plus the normal vegetables, etc. That is kind of how I still eat most of the time, but I don’t have anything against red meat really other than I don’t think that fat from it does you much good.

One thing that I truly believe is that cyclists, and athletes in general, are way too consumed by what they put into their mouths. We are pretty lucky burning the amount of calories that we do. That means we get to eat a lot more food than the average person. By eating this massive quantity of food, we get way more nutrients than the average person also. There are a few things that we need more of being athletes, but the main thing is calories. I think after you eat a certain amount of “good food”, it doesn’t matter much where the rest of the calories come from. I know a lot of you are going to disagree with me on that statement, but you’re going to you have hard time convincing me otherwise.

I’d forgotten how much food that these 20 year old guys eat. They are eating probably twice as much food as Bill, Adam or I. Yesterday we all rode around 6 hours, close to 110 miles, and it was amazing the quantity of calories consumed during the day. Ben has got some wheat allergies and other food stuff going on. Austin seems to eat just about anything he can get into his body. But both of them are eating constantly.

I did a study with the government in one winter when I was 20 years old. They paid me $20 a day for nearly 4 months to sit up in a lab in Grand Forks North Dakota to train while eating 3 different diets. The diets were a saturated fat diet (70% of the calories), a polyunsaturated diet (same 70%) and a carbohydrate diet (same). Each was for around a month long. Lab techs weighed the food I ate down to 1/100th of a gram and I did max and sub-max VO2 tests twice a week. I was eating 5500 calories a day, mainly riding inside most of the time since the winter starts super early up there. I’d guess I was probably eating another 1500 calories or so a day more when I was racing outside during the season at that time. Anyway, I felt a ton different eating those diets. I could barely stomach the saturated fat diet. I felt sick and horrible nearly the whole month. I was a vegetarian when I went in and my cholesterol was off the low end of the charts when I first got there. After 4 weeks of that diet, it was 100 points off the high end of the range. But, that being said, my output on the bicycle for a max VO2 test or a one hour sub-maximal test didn’t hardly change at all. On any of the diets.

I ate pretty good then. Lots of fresh vegetables, fruits, nuts, whole grain breads. But usually every night when I was on the road, such as the Tour of Texas, the Coor’s Classic, etc. I’d eat a pint of Hagen Daz ice cream. Nearly every night. When I got to that study in North Dakota and had to eat the 5500 calories, it was nearly impossible for me to stomach the quantity of food they were serving. It was something like 2 chicken breasts boiled in oil, plus a whole pyrex family size serving bowl of mashed potatoes, made with non dairy creamer, plus 8 slices of bread and a couple large glasses of whole milk. They finally had to split my 3 meals a day into 5 meals, just so I could eat the right number of calories and not loose weight. I was used to eating way higher caloric food that took up much less volume – ie. ice cream.

I think the movie Super Size Me was bullshit and completely unfair to McDonalds. That movie was about gluttony, plain and simple, and had nothing to do with the quality of food his was eating. It was all about the quantity of the food he was trying to consume. I’d bet you a million dollars I could eat at McDonalds for a year straight, 3 meals a day, and not have any ill effects or performance issues in cycling.

When I first started racing I used to take a bunch of vitamins. A handful a couple times a day. Now I take fish oil at night, when I have them, and just about nothing else. I figure that by the amount of food I consume, it would be nearly impossible not to get enough nutrition from it. I’ve been using salt for about 6 months now. I’ve never put any salt on my food, but a Swiss nutritionist came and talked to the BMC guys last year and told the riders to eat as much salt as they could stomach. I’ve always had a cramping problem, so I figured it couldn’t hurt to try it for a while. Other than that, I eat just about anything I want. I think I eat pretty good. I don’t eat hardly any processed food, but am not really against it, I just don’t like it as well as fresh food.

So, to wrap this up, I don’t think you need to worry so much about what you eat. That is unless you are just consuming too much and are showing the signs of that. Other than that, eat what you like because one of the big fringe benefits of riding your bike all day is you can eat a lot of food all night. 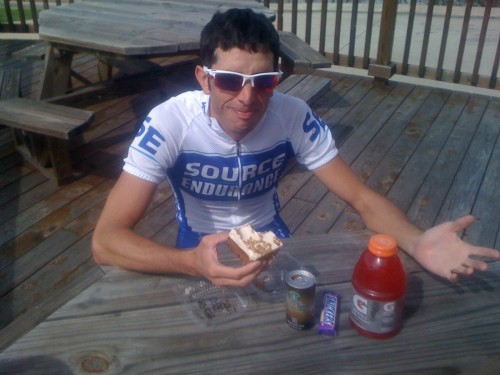 Here's Adam with a piece of carrot cake, a dark chocolate Snickers bar, a jug of Gatorade, plus a Starbucks double espresso shot at the 75 mile pit stop. 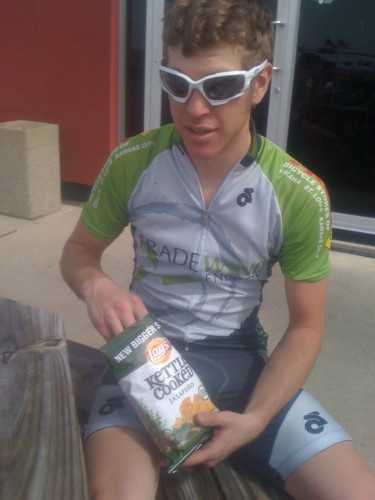 Ben got some jalapeno Kettle Chips and washed them down with a RedBull. 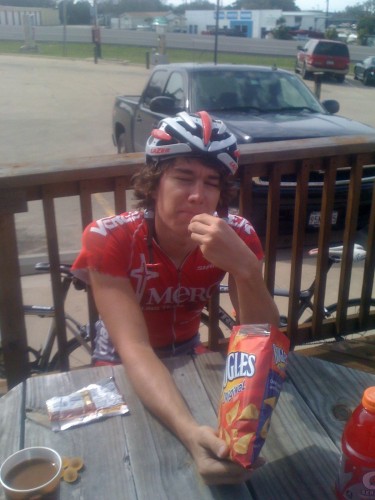 I'm not sure what these chips Austin had were. Bungles or somethig like that. I didn't really get the chips during the ride thing going on today. I just had a cup of coffee and called it a day.

19 thoughts on “Doesn’t Worry So Much About Nutrition”