I took Trudi to the airport, here in Austin, to go to Europe yesterday. Normally she has already worked nearly 2 months by now, so I guess it is a late start for her. She flew to Belgium and is going straight to Paris-Nice as her first race. It is amazing how many hours those guys work in support of their riders. It seems so overkill in many respects, but it seems to work, so I guess it isn’t. She’s a little nervous since she hasn’t met Thor, Gilbert, TJ, and some of the other new guys. She usually would have done a training in Spain, but she opted to stay here and watch cyclocross instead. The BMC team seems to have a little more laid back attitude, so that is good.

Yesterday it was hot. Not really that hot, but it was pretty warm, but muggy. It was nearly 80, but the humidity was higher. We only rode 40 miles yesterday, all flat, but it was windy. Today we’re meeting up with Stefan Rothe and doing 6 hours. I’ve done the ride before and it is pretty cool, so I’m looking forward to it. I’m not sure my butt is looking that forward to it, but where I go, it goes.

I went to dinner last night at the Whole Foods market at 6th and Lamar here in Austin. That place is out of control. This is the corporate headquarters for Whole Foods, so I guess it has to be a little over the top, but this is ridiculous. I got a glass of wine while I walked around the store and shopped. I feel kind of fat for some reason right now. I’m not sure why that is since I’ve been riding a bunch and haven’t been eating too much because of this tooth thing. I ate a salad for dinner, but had a cookie for dessert. I don’t know if that helped, but I bet I don’t feel too fat after today. It is supposed to be nearly 80 again and muggy still. That is a sure fire way to burn some calories.

I’m staying with two young guys, Ben Stover and Austin Vinton. They both went to bed around 10:30 while I was just mulling around. Then during the next half hour or so, they both got up and marched up and down the stairs at least a couple times each to get some food. An amazing amount of food. They said it was for the ride today, but they were just hungry. It’s easy to forget how much food I used to eat at their age. 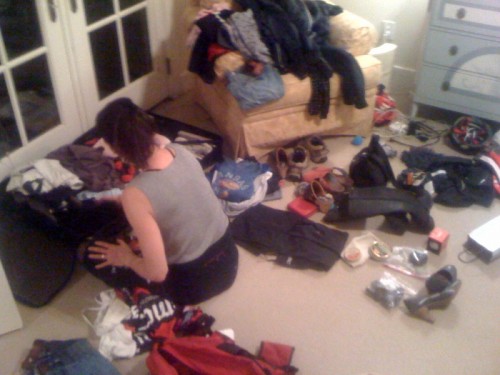 Trudi spread out organizing her stuff. 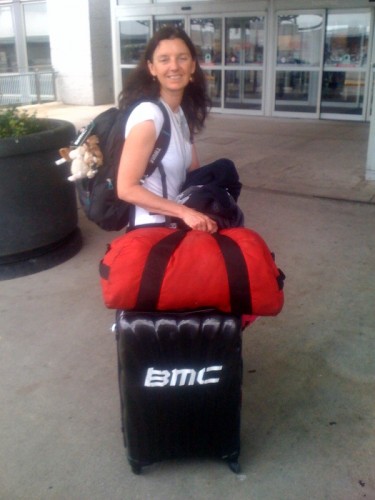 And at the airport ready to go. 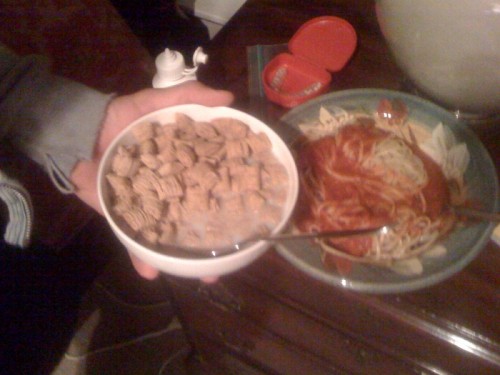 This is what Austin brought back upstairs the 2nd time around after 11 pm.