Okay, it’s a little hard to write about a puny little road race in the mountains outside San Diego when the Contador ruling comes out. So, here’s a little of my thoughts on Contador and I’ll post the Boulevard road race later.

Contador’s 2 year ban was really surprising to me. There were tons of things wrong with the whole thing. The main thing wrong was the duration it took to get to this point. I’ve written it before here, the time involves almost is enough to give him a get-out-of-jail-free card. Andy Schleck said it took 566 days. I don’t know if that is actually correct, but whatever it was it is stupid. I don’t know if it was the process or Contador’s lawyers or what that made the process so drawn out, but ultimately the process was flawed.

I remember talking to Chris Horner about Contador’s case at a cross race here in San Diego in November. Chris told him in would nearly guarantee that Contador would get off. He said for sure. And he had some pretty good points backing up his belief. He said something about a whole soccer team in Mexico turning up positive for Clenbuterol. Then he said the the UCI had told the riders that were doing the Pro Tour event, Tour of China, that they shouldn’t ingest the meat at the race because of the risk of a Clenbuterol positive. Chris, in my opinion, is one super smart bike racer. He nearly had me convinced. But, obviously, that wasn’t the case.

Everyone that is speaking out, mainly the other Spanish riders, Andy Schleck and such, seem to still be in Alberto’s camp. It goes to show you that he must be pretty much liked in the inner cycling circles, which is nice, but not really pertinent. What was pertinent was that he had a trace of Clenbuterol in his body during the Tour de France. I have a line draw in the sand with in comes to doping. Sorry, he crossed it, so he needs to serve his time out.

But what kind of time out is it? I don’t understand how his 2 year ban is done on August 5th, before the start of the Vuelta this year. He’s been racing the whole time. Isn’t a two year ban actually 2 years of not racing? Seems like this one is 6 months of actually not racing. Seems weird and wrong.

Whatever the fallout of this whole thing, I can only hope that the process somehow is addressed and is made to seem more believable. This whole procedure was flawed on many levels. So many levels that it seems like they need to maybe start all over again and try to make one that legitimatizes final ruling. This ruling is going to leave a bad taste in a lot of folks mouths, no matter which side you were on originally. 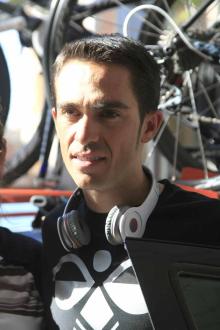 Alberto will have most of the summer to listen to tunes this season, but can get back to racing in the fall.